How gravity batteries will help us switch to renewable energy

Engineers are in a race to answer one of the most urgent questions about our switch to renewable energy — how to store it? Electricity generated by wind and solar farms is not available when the sun isn’t shining or the wind isn’t blowing, so without ways of storing the power, anything not used immediately is wasted.

Gravity batteries might be the answer. The idea sounds simple — when there is plenty of green energy, the batteries use the power to lift a heavy weight either high into the air or to the top of a deep shaft. Then when the power is needed, winches gradually lower the weight, and produce electricity from the movement of the cables.

This would mean you could store power captured by a solar farm during the day when the sun is shining, and then release that electricity to the grid in the evening when demand rises because people are at home using electricity to watch TV, cook and heat their homes. 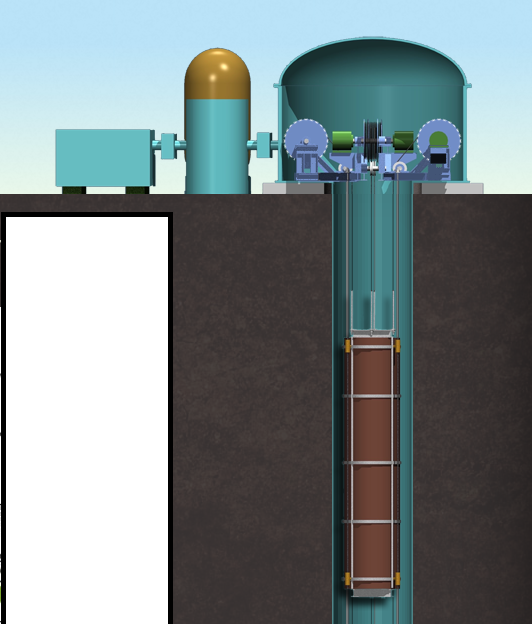 U.K.-based company Gravitricity has been testing a prototype gravity battery in the port of Leith, near Edinburgh. It is a 15-meter-high steel tower, which uses solar-powered motors to hoist two 25-tonne weights on steel cables. When the weights are lowered the motors become generators and release electricity.

Gravitricity’s senior test and simulation engineer Jill Macpherson told Raconteur the test had been a success: "The demonstrator was rated at 250kW — enough to sustain about 750 homes, albeit for a very short time. But it confirmed that we can deliver full power in less than a second, which is valuable to operators that need to balance the grid second by second. It can also deliver large amounts more slowly, so it’s very flexible."

Gravity batteries are not the only way renewable energy can be stored; lithium-ion batteries dominate the market and some experts favor green hydrogen. But gravity is free, clean and easily accessible, without the complications of producing hydrogen or the environmental and human rights concerns linked to some lithium mining.

Although gravity batteries big enough to supply power grids are still some years away, the technology is evolving quickly. Oliver Schmidt, a clean energy consultant and visiting researcher at Imperial College London, told Science.org that gravity-based storage has much to merit it. While lithium-ion batteries lose capacity after they’ve been charged and recharged over years, the gravity systems are made of robust components which will last much longer: "It’s mechanical engineering stuff… It’s relatively cheap," he says.

Gravitricity is one of a number of companies trying to build on the concept of pumped hydro, which involves pumping water uphill when power is plentiful, and then letting it flow back down again later, turning the turbines in a hydroelectric generator.

Unlike gravity batteries, pumped hydro is an established technology that provides more than 90 percent of the world’s high-capacity energy storage, according to the International Hydropower Association. But facilities are expensive to build and restricted by geography: the technology requires hills and access to water.

Gravity Power, based in California, and the German company New Energy Let’s Go have adapted the idea of combining water and gravity to store power. Both companies have systems in which water is forced through a turbine by a large, piston-shaped rock housed in underground shafts.

Watch how it works here.

Gravitricity’s system doesn’t use water, but the company’s engineers are also planning to use underground shafts rather than towers for full-scale versions of its gravity batteries, which will require much heavier weights than the Leith prototype. The team is investigating if they can use disused mine shafts in the Czech Republic, Poland and South Africa. Gravitricity plans to launch its first full scale system in 2023/24.

The firm’s managing director, Charlie Blair, says it is good to see former mining areas playing a part in helping to supply renewable energy: "Full-scale energy stores in former mines can make good use of existing infrastructure and create jobs in exactly those areas where they’re most needed… The emotional aspect of this is also important. Whole communities once worked in the mines — and generally they’re very happy to see them being used for storing renewable energy."

The World Economic Forum founded the Global Battery Alliance (GBA) in 2017 to establish a sustainable battery supply chain by 2030. The body of over 100 leading international organizations, NGOs, industry actors, academics and multiple governments became independent in 2021 and its membership is collectively working towards the goals set out in the GBA 2030 Vision.

See all by Simon Read