Businesses lining the rusty red dirt road of the commercial thoroughfare of Segbwema (pronounced shuh-BOY-ma) in Sierra Leone sell cold Coca-Cola and local ginger ale, their dry goods in the front of shops lit by pairs of large compact fluorescent bulbs. However, there is no grid to provide electricity here. Even in the neighboring city 25 miles away where the grid does reach, it provides only six hours of intermittent electricity during the six-month dry season.

Until recently, these businesses were powered at a high cost by diesel generators, when they were powered at all. But for the past several months some commercial businesses have been receiving power from a local minigrid, an isolated distribution network powered by solar and battery storage. And it’s not just local businesses that are receiving power; residential customers are connecting to the minigrid, too, and hundreds more will connect over the next few years. This approach not only provides energy access, but also drives economic growth in rural areas, and is being replicated across sub-Saharan Africa and southern Asia.

Enthusiasm for the growth of minigrids in Africa and South Asia is shared by young companies looking to provide the hardware, software and services to build them. Commercial investors and energy majors are likewise eyeing the opportunity. Development partners such as the U.K.’s Department for International Development and Germany’s GIZ are committing hundreds of millions of dollars to explore the potential for minigrids and support their growth, and groups such as the Rockefeller Foundation are investing time and money with the goal of speeding economic development. Most promisingly, governments in countries as varied as Tanzania, Rwanda and Sierra Leone are beginning to think about how the off-grid energy provided by minigrids could help them achieve energy access and economic growth targets.

However, minigrid market share is extremely small, even in leading markets such as Kenya, and its growth is slow. To live up to the promise attributed to them by hopeful companies, enthusiastic development partners and anxious governments, minigrids must demonstrate they can compete on cost with other energy-access alternatives with a commercially viable business model. RMI’s recently released report, "Energy Within Reach: Growing the Minigrid Market in Sub-Saharan Africa," describes the economics behind minigrids and compares them to the competing or complementary alternatives of solar home systems and grid extension. Establishing the commercial viability of minigrids is the first step toward attracting the significant concessional and commercial finance necessary to have a real impact on energy access and economic growth in Africa.

We found that the cost competitiveness of minigrids versus alternatives depends on two key factors: the load size served and the distance of the minigrid site from the existing grid. 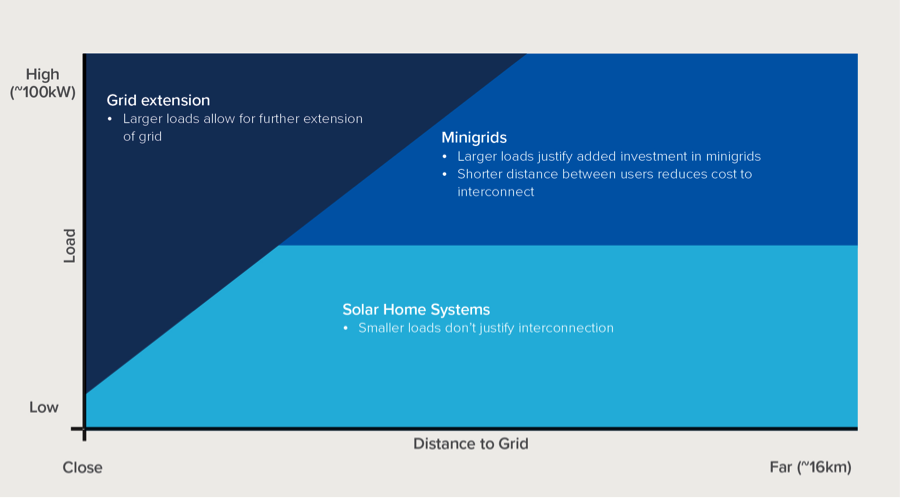 As shown in the figure above, the cost of extending the grid increases the farther a site is from the existing grid. The two primary off-grid energy access options — solar home systems and minigrids — can serve customers who are too far from the existing grid or in places where the grid is not reliable enough for customer needs. Solar home systems are better suited to serve smaller load sizes (typically less than 5 kWh/month). Slightly larger load sizes allow the cost of distribution lines to be affordably amortized. Other factors, such as using more of the available solar generation and battery storage capacity by balancing evening residential use with daytime commercial use, also can improve minigrid economics.

The difference between average minigrid costs in Africa and best-in-class costs is enormous. Average levelized cost of electricity (LCOE) for solar-diesel-battery minigrids could be as high as $1.80/kWh, while best-in-class costs for the same technology are around $0.95/kWh. This gap can be attributed to poor site selection, improper system sizing, a lack of competitive tenders and the overwhelming reliance on donor-supplied grant financing. If the minigrid market is to grow more quickly, these costs must be brought down.

Cost metrics depend on two key factors: the load size served and the distance of the minigrid site from the existing grid.

Solar and storage costs, which comprise nearly 30 percent of costs for solar-battery-diesel systems, are projected to decrease by half in the next decade. Other hard costs could be brought down by emphasizing increased asset use through energy efficiency and load management. Industry consolidation also could drive down hardware costs. Site clustering, standardized customer acquisition processes and aggregated software could help reduce minigrid soft costs in Africa.

As shown in the figure below, the cost of capital available to minigrid companies in Africa (15 percent to 20 percent) is an additional impediment to growth, and a tremendous cost burden for those accessing market-rate debt. Development partners could help coordinate project finance for minigrids, along with patient equity and venture debt, to both reduce finance costs and free up company capital to accelerate growth. 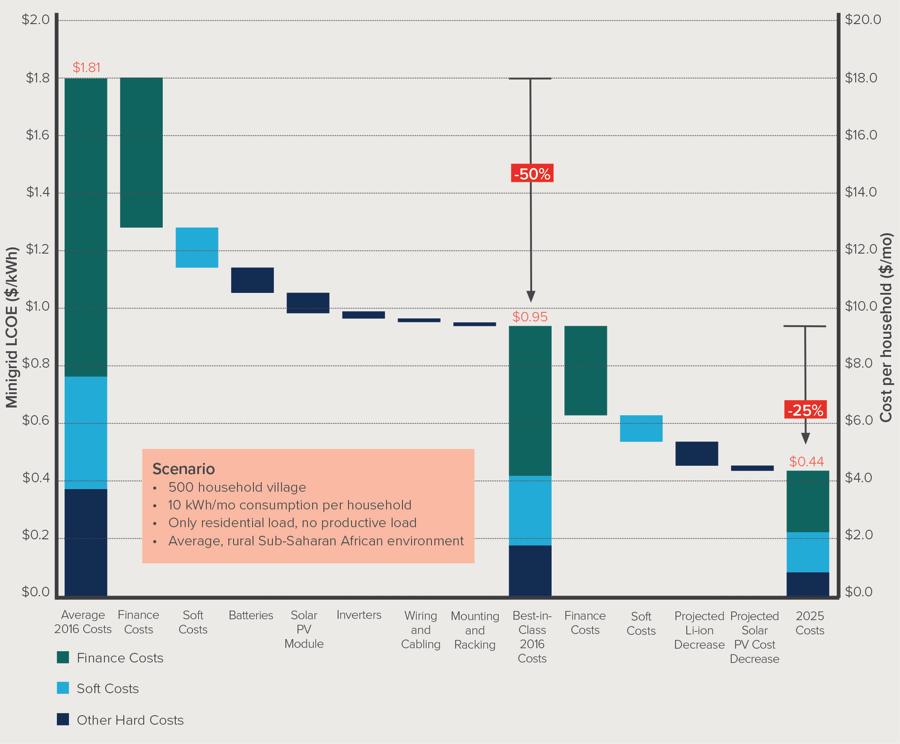 To realize the potential for minigrids to drive economic growth and energy access in Africa, the following actions are needed from the private sector, development partners and governments:

Providing energy access to the hundreds of millions of unelectrified households in sub-Saharan Africa quickly, cost-effectively and sustainably is a daunting challenge. Minigrids will play a key role in addressing this challenge, particularly for the isolated commercial and industrial customers, such as the shopkeepers and grain mill operators in Segbwema, that are driving real economic growth.

See all by Kelly Carlin