How P&G, Unilever are washing beaches clean of plastic

"Plastic" defines a substance that is soft, pliable and easily workable. It is ironic that plastics have placed a chokehold on the environment and the economy.

"Globally, despite 40 years of effort to focus on recycling, we currently collect 14 percent of plastics for recycling," said Andrew Morlet, CEO of the circular economy think tank the Ellen MacArthur Foundation, at a World Economic Forum (WEF) panel during Davos 2017. "And we lose a lot of that during the recycling process, so we retain only 2 percent of that value for reuse. At the same time, one third [32 percent] of all plastics leak into the environment."

Our addiction to throwaway containers, he warned, means that by 2050 there will be more plastic material in the ocean, by weight, than fish.

Morlet spoke alongside sustainability executives from Procter & Gamble (P&G), TerraCycle and Suez, which are among more than 40 companies supporting the New Plastics Economy (NPEC), an Ellen MacArthur Foundation and WEF-led plan to increase plastics recycling to 70 percent within three years. The remaining 30 percent will be redesigned. The action plan follows on the heels of a 2016 report tracking the interlinked environmental and economic fallout of plastic packaging.

Plastic production grew from 15 million tons in 1964 — around the time "The Graduate" tipped us about the product of the future — to 311 million tons in 2014; production will double again in the next 20 years. Every minute, the equivalent of one garbage truck’s load of plastic is dumped into the ocean. This presents a human problem: Because most plastic is not recycled, $120 billion annually is lost to the economy. The United Nations Environment Programme calculates that externality costs, including damaged natural systems and clogged urban infrastructure, add up to $40 billion.

"We’re on the cusp of a disruptive economic, social and technological revolution," stated the NPEC report. "Our world is being rewired by digitization, automation and artificial intelligence. Fields as disparate as biology, engineering and design are merging. The time for moonshots is now."

Making the case for moonshots

Their challenge is that plastics are essentially designed for landfill, incineration or energy recovery into fuel. Small format plastic packaging (10 percent of the plastics market; think candy wrappers and coffee lids) falls through recycling sorting systems and has no known economic use. Multi-material packaging (13 percent of the market) offers enhanced oxygen and moisture barriers at low weight and cost — but it’s hard to separate. Small concentrations of uncommon plastics such as PVC (10 percent of the market) can reduce the recyclability of PET products such as plastic and soda bottles. And nutrient-contaminated packaging is difficult to sort and clean for high-quality recycling (hint: opt for compostable boxes over EPS clamshells).

Per NPEC and SYSTEMIQ analysis, redesigning packaging for after-use processes can generate $190 to $290 per ton of plastics collected. This can be dealt with from the start: Before joining the NPEC, Dow developed a stand-up pouch made of single-material polyethylene, suitable for frozen and dried foods. The pouches, which won an R&D Magazine design award, are lightweight and demand less energy use in manufacturing, transportation and refrigeration. Other companies are turning to recyclable or recycled plastic to package their products while improving customer trust, reducing greenhouse gas emissions and turning away from fossil fuel feedstocks. 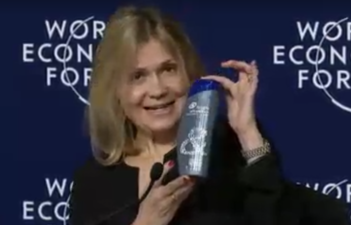 During Davos, Procter & Gamble (P&G) announced that it will sell shampoos in a recyclable bottle made of 25 percent beach plastic. P&G committed to creating half a billion hair-product bottles made with recycled plastic every year by 2018, representing more than 90 percent of such bottles sold in Europe across the company’s portfolio. To do so, it worked with recycling solutions company TerraCycle, which connected the manufacturer with hundreds of volunteers and NGOs collecting 2,600 tons of plastic waste found on beaches. Suez then turns the mixed materials into a high-performance polymer.

"The bottles will be made of HDPE, a traditional No. 2 plastic that is municipally recyclable," Brett Stevens, TerraCycle’s vice president of material sales and procurement, told GreenBiz. But there are barriers to using 100 percent pre-used plastic, he said, which would cause the bottle to crack when squeezed: "A blend helps stabilize the plastic so it will perform well."

In early January, Unilever committed to using 100 percent reusable, recyclable or compostable plastics packaging by 2025. It will also publish a full "palette" of plastics used in its packaging to create an industry protocol and invest in a scalable technical solution to recycling multi-layered sachets that often leak into the ocean.

"About 2 million metric tons per year of rigid polypropylene (PP) are being disposed in the EU, against approximately 250,000 tons being recycled," Jürgen Priesters, TOMRA Sorting Solution’s director of business development and recycling, told GreenBiz. "If we could sort this waste before disposal, about 1.6 million tons PP could be returned to the market." He said the final product of recycled material could have a value of $1.07 million annually.

If bioplastics are to replace common plastics packaging, they must have high carbon dioxide and moisture barriers, easily incorporate into PET recycling streams and achieve cost parity with regular plastics.

If bioplastics are to edge out common plastics packaging, they must have high carbon dioxide and moisture barriers, easily incorporate into PET recycling streams and achieve cost parity with regular plastics, said Gihan Hewage, associate at Lux Research, in a conversation with GreenBiz.

The Ellen MacArthur Foundation and the WEF will contiue to incentivize companies to do away with marine plastics litter or turn it into an economic boon, promising to roll out contests and prizes to innovators in the coming year.

A three-year solution is needed to redesign the world’s ubiquitous and overlooked plastics industry that is piling up environmental and economic harm by the minute. At the moment, though, there is no "silver bullet" to combat plastic pellets.

Natureworks Finds Bioplastic Can be Sorted Out of Recycling Streams

Inside the strange, circular world of advanced materials