How HP is taking its Texas data centers 100% renewable

One of the largest tech companies in the U.S. soon will power its five Texas data centers with 100 percent renewable energy.

It also is an excellent example of the progress promoted by the Business Renewables Center, an RMI-convened and member-led platform that accelerates corporate procurement of off-site renewable energy by bringing together corporate buyers, project developers and service providers (including founding members HP and SunEdison).

Jumping on the Texas wind bandwagon

The company has about 1.5 million square feet of data center operations in the state. Its purchase of 112 megawatts of wind power from SunEdison will provide 100 percent of the power necessary to run those centers, and is the equivalent of powering 42,600 homes each year.

It also brings the amount of Texas wind bought through corporate power purchase agreements (PPAs) in the past three years up to 1 GW. 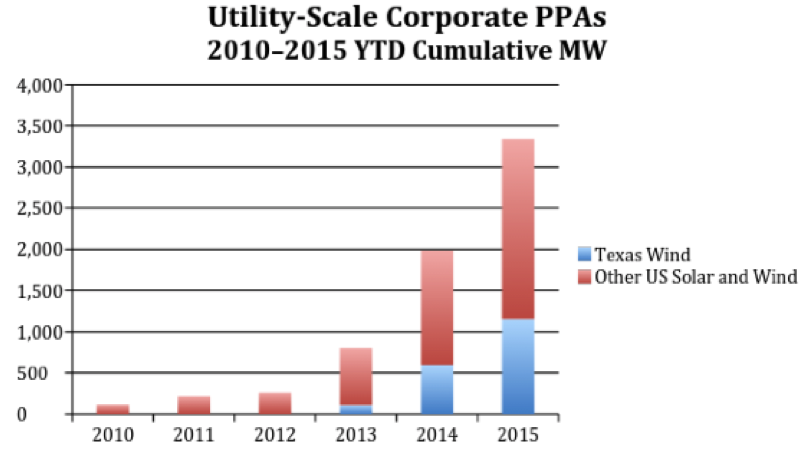 HP’s purchase will allow SunEdison, the world’s largest renewable energy development company, to begin construction on the 300 MW South Plains II wind farm. Texas leads the country in wind power nameplate generating capacity, having a total installed capacity of over 14 GW — 21 percent of the 66 GW installed in the U.S.

Besides having good wind resources and relatively cheap land, the boom in Texas wind power is partly due to the Competitive Renewable Energy Zone (CREZ) transmission lines completed in 2014. The new 345 kV transmission lines include 186 projects across Texas that help get energy from the ideal wind farm sites to the areas that need energy most.

Bridging the gap between corporations and developers

One challenge for corporate offsite renewable purchases is often the length of the PPA.

“One general issue that we deal with is developers wanting long-term deals such as 25 years and corporations wanting shorter-term deals,” said RMI associate Kevin Brehm, who works with the BRC. “The median duration of a corporate offtake PPA is 20 years, which is a long commitment for a corporation.”

Imagine locking in an energy deal as long as or longer than your company has even existed. The BRC helps bring developers and corporations together and bridge that gap to move a deal forward.

“The BRC is a way for developers and corporations to meet in a low-risk, pre-commercial environment, build relationships, and build trust,” said Brehm.

HP and SunEdison signed a 12-year PPA, enough longevity for revenue assurance for the developer but short enough for corporate comfort. This shows that developers are willing to work on terms that work for corporations and is one reason the market is trending towards shorter PPAs.

“Most developers are understandably very eager to sign deals as soon as possible, so they can take advantage of the 30 percent investment tax credit, set to expire in 2017,” said Dan Seif, senior consultant at the Butler Firm, a consulting and legal services firm supporting many of the largest solar developers. “Though many are also playing the long game, they realize that securing PPAs for projects that start operating in 2018 and 2019 is important as well."

The BRC has a goal of 60 GW of off-site corporate renewable energy procurement. However, closing a PPA can be a daunting endeavor.

“Environmental considerations figure into all of our IT and real estate decisions that we’re making,” Gabi Zedlmayer, HP chief progress officer, told the New York Times. “It’s still rather a complex process over all — we can’t just go and purchase the energy that we want. To get to this type of an agreement, this has taken us the better part of a year.”

The BRC provides resources that help corporations navigate the transactions and that explain PPA contracts, the types of deal structures available and how to perform an economic analysis of the deal. 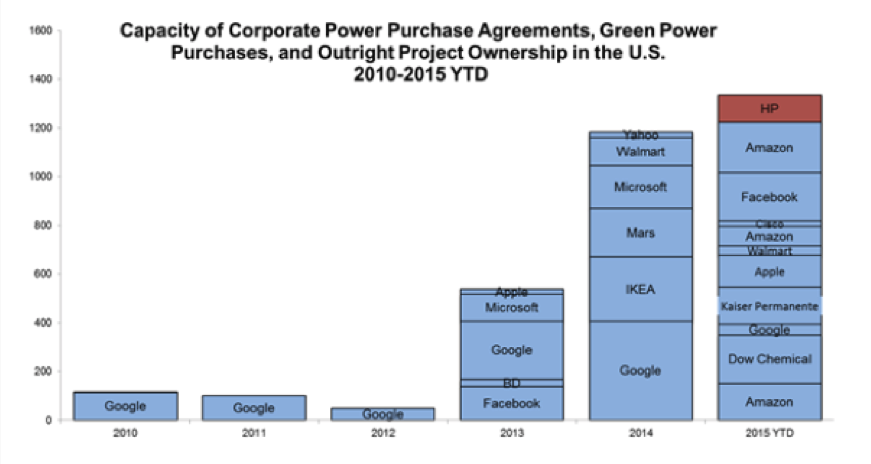 So far in 2015, corporations have signed more PPAs than in any previous year, including one by two other founding members of the BRC — Kaiser Permanente and NextEra. In the first half of 2015 alone, corporations signed PPAs for almost 1.4 GW of renewables.

“Companies need to show shareholders and customers concrete action on climate change goals,” said RMI managing director Hervé Touati. “Large-scale renewable energy procurement does not have the size limitations of rooftop PV installations and is faster and more visible than energy-efficiency programs, even though in the long run energy efficiency can be a better solution.

"Large corporations are beginning to develop the expertise needed to structure, assess, negotiate and get approval for large-scale renewable PPAs," Touati said. "Knowledge sharing is key to accelerate the trend and avoid reinventing the wheel.”

HP is only one of the small but fast growing number of players in the ICT industry that are purchasing renewable energy, including Intel, Microsoft, Google, Apple, Facebook, Salesforce and Cisco (many of them also BRC members, advisers and other allies).

In fact, the amount of money the ICT sector spends on renewable energy is growing faster than in any other sector, according to a recent National Renewable Energy Laboratory (NREL) (PDF) report.

Data centers are responsible for about 30 percent of all electricity used by the ICT sector, and 2 percent of total U.S. electricity consumption. Many ICT companies are turning to renewables to both reduce costs and address environmental goals.

The ICT sector is an important market for renewables.

In fact, the NREL report stated, “Given the scale of electricity use by ICT companies, renewable electricity procurement across all levels of the industry could be a significant market driver for renewable development in the United States.”

HP’s PPA with SunEdison will avoid the emission of more than 340,000 tons of carbon dioxide annually.

The raison d’être of the BRC is to leverage the knowledge of the first movers, many of which are members, to create a large class of fast followers that will benefit from the accumulated experience of their more advanced peers.