How IBM is Enabling Smarter Management of ... Medieval Abbeys

Question:What does a rack of high-performance, network blade-servers have in common with the 15th century Flemish tapestry The Hunt for the Unicorn?

Answer: Both are being watched over by some of IBM's most advanced smart building systems.

Last week, as part of a roll-out of a broader suite of smart building technologies, I got to enjoy a dose of high culture and high technology, catching Big Blue's announcement of novel collaboration with New York City's Metropolitan Museum of Art.

IBM is supplying a suite of hardware and software as part of its Intelligent Building Management system to help the Met fine-tune the maintenance and preservation of its one-of-a-kind collection of medieval artwork.

The move adapts technology developed originally to monitor and manage energy-intensive data centers -- cutting-edge technology of the 21st century -- to help care or for some of the most priceless, hand-made religious and secular artifacts dating back to 800 AD. 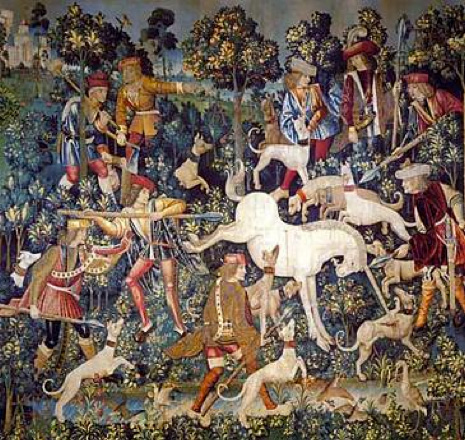 At the announcement, Dr. Paolo DionisiVici, an Associate Research Scientist at the Met, made clear why doing the latter represents the greater challenge.

The Met's main medieval collection is housed in The Cloisters Museum & Gardens, an assemblage of medieval French abbey structures, transplanted nearly a century ago (more on that below).

Authentic as the setting is, the challenges of managing temperature, humidity, and other variables are daunting: castle-like thick rock walls define a space that sees tens of thousands of visitors each year.

The artwork itself also offers up material preservation challenges of a stupefying variety.

The tapestries, like the most-famous-of-all Unicorn hanging, are made of a combination of wool, linen, metal threads, vegetable dyes and other delicate materials. After 600 years, they remain remarkably vivid.

Nearby in the museum are painted wooded religious artifacts that require different preservation conditions.

"Every object is unique," DionisiVici said.

That's where IBM comes in. To monitor this menagerie, IBM is deploying a network of low-power motes -- small electronics packages fitted with sensors and antennae for communication. [An example of a type of mote IBM has developed, the MEMSIC IRIS mote, is pictured at left.]

"The motes can sense temperature, humidity, corrosion, contamination, light levels, air flow, pressure and more," said Dr. Hendrik F. Hamann, one of IBM's research scientists working on the project. The motes are also very energy-efficient and self-configure into a "mesh" network, he explained, by independently figuring out how to route data from one to the next.

For now, the technology covers seven rooms, a portion of the Cloisters' overall layout, but including the famous Unicorn tapestries.

What can motes do when overseeing a vaulted-ceiling room filled with priceless art? In a way the museum cannot today, the sensors and analytic software can tap into real-time data to observe and model microclimates, revealing with greater precision areas of higher heat, or dryness, or other variables that can conventional sensor systems.

IBM's analytical models can even guide how to place particular works of art, given better understanding of a room's thermal dynamics. Wooden materials, for example, need steady humidity for optimal preservation.

"This is the first large-scale deployment of a smart sensing infrastructure coupled with deep analytics in a museum environment," said Hamann.

IBM's pairing with The Cloisters continues a century-old tradition of one-of-a-kinds that define the site.

About a century ago, craftsmen in France painstakingly dismantled five cloisters -- essentially, abandoned convents or monasteries designed for secluded, contemplative living -- packed the pieces in boxes, and shipped them via boat across the Atlantic.

Once landed, the crates were hauled up to the highest promontory of Manhattan, to land owned by John D. Rockefeller -- the wealthiest man in U.S. history. Through the years of the Great Depression, some of those same craftsmen methodically reassembled the stones into a meticulous recreation of an abbey complex.

To complete the setting, Rockefeller bought up scores of acres of Manhattan land around the Cloisters and -- just for good measure -- also acquired the ridge of land immediately across the Hudson River, so as to protect the view from his creation.

Rockefeller had no interest in living in the transplanted abbey. In fact, he died a year before the complex was completed.

It was built strictly as a home for the more than 5,000 pieces of medieval art he collected in his twilight years, with the intention of donating the entire complex -- building, land and artwork -- to the Met.

If visiting New York City, The Cloisters is a must see -- one of the best and least-known treasures the city has to offer. With IBM's help, the masterworks there will be around to enjoy for a long time to come.