Last month, at the fourth annual Climate Business Forum, hosted in New Delhi by the International Finance Corporation (IFC), part of the World Bank Group, there was a buzz in the air about business opportunities in clean solutions, as Indian government ministers, leading companies and investors presented their plans to scale up solar, green buildings and distributed energy storage using disruptive business models and innovative financing.

India is now a leading destination for private-sector players wishing to ramp up investment in clean technology sectors. The country is already on track to achieve the renewable energy commitments made for the Paris Agreement, having created a 13-gigawatt-plus market for solar energy and the fourth-largest wind power market in the world. And this is only the beginning, according to the new IFC Climate Investment Opportunities: South Asia report, which provides a roadmap for rapid future growth in the region: There are climate-smart investment opportunities totaling $3.4 trillion by 2030 as countries implement their climate commitments.

Carbon pricing is a key part of attracting private investment, and was a key topic for discussion in Delhi. As governments seek to implement the Paris Agreement to tackle climate change, they are enacting policies that penalize high-emitting activities. Today, more than 65 jurisdictions around the world are using carbon pricing as a tool to level the playing field between clean energy and fossil fuel; more action is expected as countries make good on their Paris commitments. 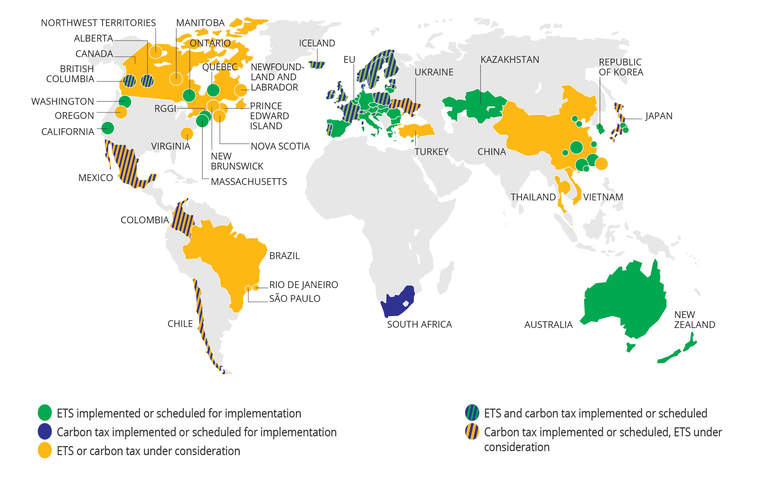 The World Bank
<p>&nbsp;More governments are using carbon pricing to address climate change, according to <a href="http://carbonpricingdashboard.worldbank.org">World Bank research</a>.</p><p></p>

In response, internal carbon pricing has emerged as a popular tool that allows companies to reduce emissions and channel investments towards cleaner, more-efficient technologies. It helps businesses to assess climate-related risks and opportunities, mitigates against future climate regulations and helps deliver corporate sustainability goals. A newly released report by CDP (PDF) reveals that around the world, nearly 1,400 companies from a wide variety of sectors are using internal carbon pricing, or plan to do so in the near future. This includes more than 100 Fortune 500 companies with collective annual revenues of $7 trillion.

In South Asia, companies are actively pursuing carbon pricing measures while also advocating for policies through initiatives such as the Carbon Pricing Leadership Coalition (CPLC). In 2017, 139 companies in Asia are pricing carbon, including 40 from India. Through consultations with more than 100 business leaders from a variety of energy-intensive sectors, a joint World Bank and TERI study found that 17 percent of companies interviewed already were pricing carbon, and 40 percent indicated plans to do so within two years.

In New Delhi, I had the pleasure to participate in a carbon pricing dinner organized by the CPLC and the World Resources Institute, and moderated a panel of leading Indian and Brazilian companies. These discussions offered many insights and inspirations for companies around the world as they seek to manage risk and unlock new opportunities associated with climate change.

One takeaway is that companies in India are already experiencing a kind of carbon pricing, as the government implements the Perform-Achieve-Trade (PAT) policy for energy efficiency, renewable energy certificate scheme and a cess (or tax) on coal production of about $6.20 per ton. Leading companies are already incorporating these costs into their business models and anticipate that the cess may rise, and that carbon pricing may be coming in the future.

Companies also believe that using a carbon price helps to advance internal progress toward corporate climate change goals. Many companies explained that putting in place an internal carbon price had helped to "bring climate to the boardroom" and away from the sustainability and climate departments. By including a price in investment decisions, companies are monetizing environmental risks and steering their investments toward the best options. Pricing carbon also was seen as a strategy to respond to increasing questions from investors about how businesses are managing carbon risk.

For example, Ulhas Yargop, group president, group CTO, group executive board member and chairman of group sustainability, Mahindra & Mahindra Ltd., explained how the company adopted an internal carbon price of $10 per ton in 2016 after a comprehensive evaluation of emissions reductions and energy savings opportunities. The company sees the price helps to accelerate investments in low-carbon technologies and plans to expand the use of pricing to other of its businesses and along its supply chain.

Importantly, using a carbon price is helping to trigger more research and development into low-carbon solutions, giving the company an edge on competitors.

"My guess is that measures like carbon tax will result on innovation at an unprecedented scale," said Anand Mahindra, chairman and managing director of Mahindra Group of India. "This will be an opportunity for India to provide frugal but innovative solutions that will be relevant to the majority of nations. Within the Mahindra Group, our increased awareness of the need for carbon control opens up new business opportunities and tranquilly, it serves as a spur for internal innovation. We are pioneering a slew of low-carbon businesses including electric cars and scooters, hybrid vehicles, solar energy systems, micro-irrigation, green buildings and solar power generators. We are changing the way we work."

Mahendra Singhi, CEO of Dalmia Bharat Cement Group, explained his company’s journey to be more carbon-efficient and explained that Dalmia is now one of the most climate-friendly cement companies in the world. It is using an internal carbon price of $11 per ton to guide decisions on capital-intensive projects, managing carbon to be sustainable and profitable. Putting a price on carbon also has set the company on a cleaner energy pathway: It has committed to purchase 100 percent of its power from renewable energy sources. To implement these ambitious targets, the company has created an internal revenue stream to fund new climate abatement projects.

Tata Steel is using a $15 per ton price to deliver investments in improved energy efficiency.

Tata Steel is using a $15 per ton price to deliver investments in improved energy efficiency, said Sanjiv Paul, vice president, safety, health and sustainability. It plans to roll out its carbon price to subsidiaries as well as suppliers and customers. Like many manufacturing companies, Tata wants to tackle a key long-term challenge: decarbonizing operations while maintaining competitiveness.

Marina Rocchi Martins Mattar, director of institutional relations and sustainability at the Brazilian Association of Chemical Industry, or Abiquim, brought some terrific South-South experience exchange. While the Brazilian government is not pricing carbon, companies see other countries such as Colombia, Chile and now Argentina using carbon pricing. This is creating a concern about competitiveness: As companies in neighboring countries start innovating solutions, Brazilian companies will become a buyer of the solutions rather than a supplier.

She also shared the lessons learned from a two-year pilot emissions trading simulation run by more than 50 major companies in Brazil. Despite the lack of a government-mandated price, these companies are getting ready for carbon constraints by testing different strategies and trading to achieve results. She also explained how companies are advocating for predictable carbon pricing by sharing design lessons (PDF) and issuing a joint communiqué asking the government to put a price on carbon.

Clearly, momentum for carbon pricing is building in South Asia. To sustain this momentum and raise ambition, CPLC is creating an Indian chapter that will help companies to exchange knowledge and experiences in using internal carbon pricing, work more proactively with one another and engage with policy makers and other stakeholders to accelerate ambition and the transition to a lower-carbon future. IFC welcomes new corporate CPLC partners in India and South Asia, and will work with WRI, CDP and other partners to deliver solutions.

Companies double down on energy productivity