Last month, I spoke at the 17th Annual Wall Street Green Summit, an event focused on exploring the latest developments in clean energy finance. The summit included industry experts who discussed an array of exciting developments throughout the renewable energy sector. My presentation focused on capital market strategies in distributed generation and wanted to share some highlights.

First, some perspective. Clean energy has grown rapidly in the last decade, up to 18 percent of total energy deployment from 9 percent in 2008. But it remains a small fraction of overall power generation worldwide. In the United States, coal and natural gas account for more than 60 percent of electricity generation.

A fundamental shift in investments is required

Despite the rapid growth, the current pace is not enough to reach global climate goals. The capital needed to achieve Paris Agreement goals is significant.

The International Energy Agency estimates that to meet the goal of keeping temperature increases this century below the 2 degrees Celsius goal, renewable energy capacity must grow to 4.53 terawatts by 2030. Some estimate that some $2 trillion per year in investments by 2030 (PDF) is required to achieve this. With only 0.4 percent of institutional capital currently in the space, a fundamental shift is required. Institutional capital needs to flood into all segments of clean energy: transportation, energy efficiency and power.

There are positive signals. Despite the U.S. decision to back out of the Paris Agreement, 256 investors with $28 trillion in assets under management have signed onto the Climate Action 100+ Sign-on Statement, including CalPERS, Manulife and many other large institutions. BlackRock’s Larry Fink promised "institutional activism" by mandating climate-friendly management initiatives. And more than 800 large institutional investors have committed to divesting from fossil fuels in recent years. 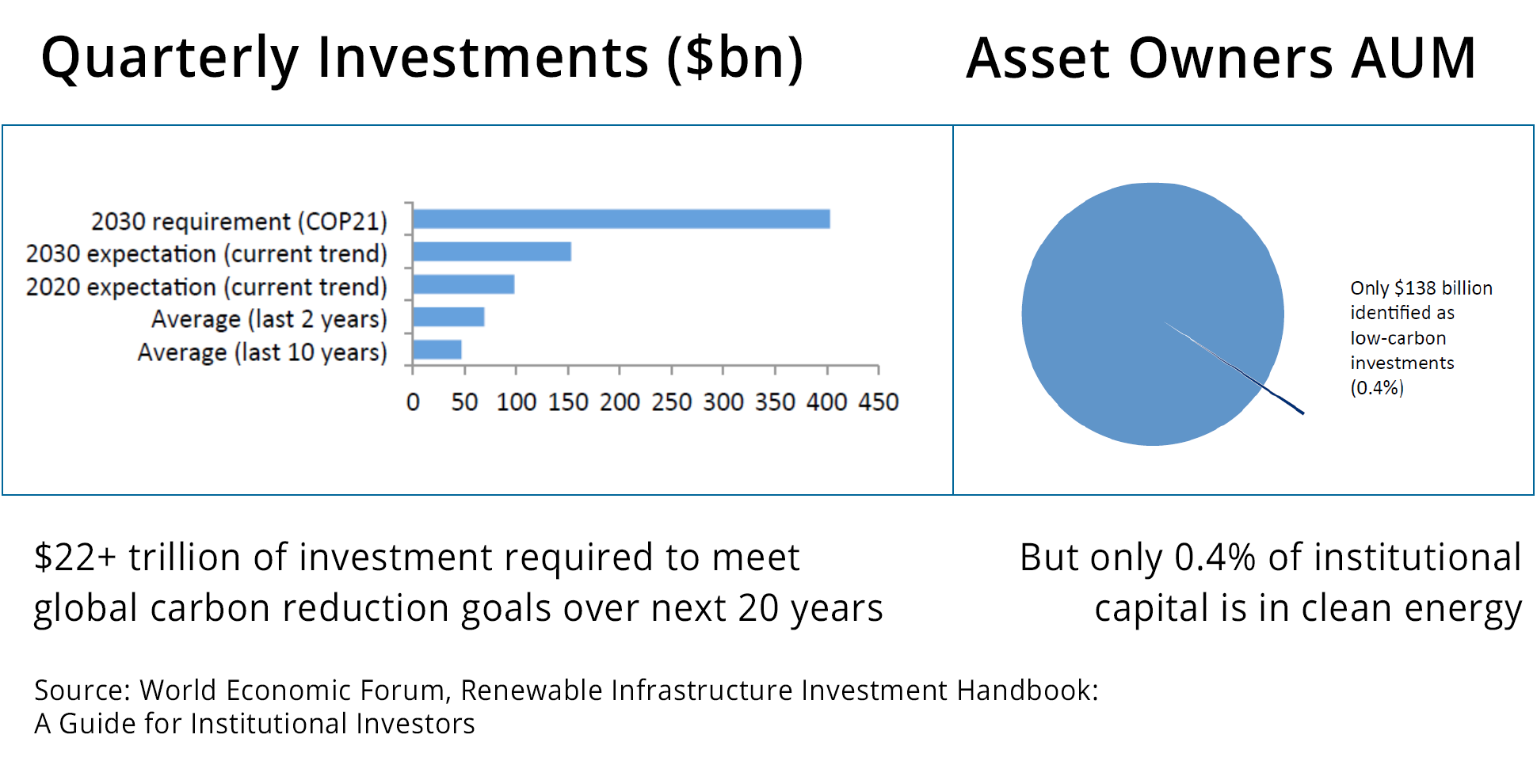 While institutions are moving away from fossil fuels, however, they are not flooding into clean energy. Carbon divestment is not being replaced with renewable energy investment, in part, because the sector has yet to create the mechanisms for the wide-scale clean energy investment. To make this happen, it is critical that the clean energy sector deliver investment opportunities to these investors that are familiar and understandable.

The significance of investing in distributed generation

The distributed generation segment is particularly exciting as many innovations — storage, energy efficiency, community solar — are happening there. Distributed energy also appeals to the military, municipalities and individuals in search of grid resiliency or more control over their energy supply. And, with 16 percent of the world’s population with little or no access to electricity, distributed generation will be a first source of electricity for many.

Because project financing is impractical for distributed generation, we must look to aggregation financing models.

Securitizations are a tool that has been used for credit card receivables, mortgages and equipment leases. In a securitization, the issuer creates a large enough pool of similar assets such that no single asset should affect debt repayment. Investors purchase bonds or notes that are repaid through the cash flows of the underlying assets. Residential loans, PPAs and leases are well suited because they are small assets with standard documentation, identifiable credit risk through a FICO score and predictable cash flows. Securitization, or any other rated bond offering for that matter, is an excellent way to tap the institutional debt market.

For institutional equity, the yieldco should be reconsidered. A yieldco is a dividend-paying company created for the long-term ownership of assets. The yieldco typically buys operating assets, including renewable assets, with long-term, predictable cash flows. This investment can be attractive to shareholders with long-term liabilities, such as insurers or pensions, because they deliver predictable cash returns with little stock volatility. This is how it is supposed to work.

The American yieldco experience has proved volatile. Eight publicly traded yieldco launched from 2013 to 2015, led by existing sponsors that used the vehicles, in part, to purchase the sponsor’s assets. The yieldco focused primarily on utility-scale wind and solar projects and enjoyed rapid stock growth based on promise of substantial pipeline, but ultimately the model backtracked — challenged by excessive debt and more modest growth outlooks.

Despite the crash, yieldcos are not a bad concept; they were just poorly executed. When they are well-structured and conservatively managed, yield-generating vehicles such as yieldcos are ideal homes for long-dated renewable energy assets and perfect for liability-matching investors.

Yieldcos were inspired by master limited partnerships (MLP), which have enjoyed institutional investor confidence for years. MLPs invest in energy infrastructure and deliver quarterly dividends and low volatility, which is exactly what yieldcos should have done.

Instead, in the frenzy of 2014 to 2015, stock prices grew, and the American yieldcos were forecasting stock growth of 15 percent-plus per annum on top of assets with 8 percent internal rates of return. The math didn’t add up.

In contrast, the European yieldcos took a much more modest approach and performed much better than their U.S. counterparts with minimal stock growth and reliable dividends of about 6 percent per annum.

For instance, the Renewable Infrastructure Group (LSE listed) has had little share price volatility, except Brexit in 2016. This yieldco has delivered steady, reliable dividends. The European model has proven effective at aggregating distributed assets and attracting institutional capital.

On the debt side, securitizations and institutional bond offerings make sense for investing in distributed generation.

Securitizations are a tool that has been used for credit card receivables, mortgages and equipment leases. In a securitization, the issuer creates a large enough pool of similar assets such that no single asset should affect debt repayment. Investors purchase bonds or notes that are repaid through the cash flows of the underlying assets. Residential loans, PPAs and leases are well suited because they are small assets with standard documentation, identifiable credit risk through a FICO score and predictable cash flows. Securitization, or any other rated bond offering for that matter, is an excellent way to tap the institutional debt market.

Carbon divestment is not being replaced with renewable energy investment, in part, because the sector has yet to create the right investment mechanisms.

There have been more than a dozen residential securitizations since 2013, and we see the an asset-backed securities (ABS) market primed for distributed generation assets.

First, a commercial and industrial project securitization went to market and was rated by Kroll in 2015; second, a handful of SolarCity securitizations have included non-residential assets; and third, Spruce brought a deal to the market in 2016 that included mostly energy efficiency. These collective indicators show an ABS market that is increasingly receptive to less standard, more esoteric distributed generation assets.

Not only is the market getting more comfortable, but it is increasingly clear that the ABS market is the right place for distributed generation. Here are some challenges that need to be addressed:

In short, an innovative financing vehicle is not needed. Yieldcos and securitizations are proven aggregation vehicles, and they are particularly well-suited for distributed power generation. If distributed generation is to rapidly scale, and play a larger role in replacing fossils fuels, we must provide investment vehicles that institutional capital can understand and invest in at the scale required to transition from fossil fuels to a clean energy economy. 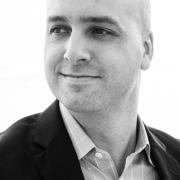 See all by Thomas Byrne