Birds migrating south from Alaska and Canada would have few suitable habitats to stop for a respite over drought-stricken California if it weren’t for an innovative mix of market-driven investment, non-profit mission and Big Data.

Aware that 95 percent of California’s wetlands had dried up or already been converted to farmland, and fearing migrating birds could perish, the Nature Conservancy went into business with a novel market project to develop temporary wetlands.

“We rely on the largest citizen database in the world, eBird, to get info on bird sightings in the Central Valley to figure out when and where the birds might need habitat," said Sarah Heard, project director of the Nature Conservancy's California conservation investments. "Then we go to the nearby rice farmers and purchase the right to flood their fields temporarily and use it as a bird habitat." They used a reverse auction so that farmers bid to participate, creating a market demand for its lease business.

Farmers earn extra income by leasing the right to flood fields in the off season, birds are saved and the Nature Conservancy saves a lot of money by not buying land out right.

So successful are the Nature Conservancy's various market-based approaches to financing conservation that last year it launched NatureVest, an impact investment arm that turns to the capital markets for funds and promises financial returns as well as social returns.

In this new economic era of tapping unused capacity or wisdom or capital; crowdsourcing ideas and money; and bringing it all together through Big Data, there’s no question innovation is being unleashed.

As this is happening, the walls that separated the non-profit world and market-based business world are coming down. Now nonprofits use the capital markets for funding, and shareholder-owned companies and investment funds direct more of their money for social and environmental returns.

The timing is perfect, given the needs of the planet.

As the COP21 international climate talks near, there is much hope that innovation and this melding of nonprofit, public and business sector interests will turn agreements into action.

"As negotiators arrive in Paris with their INDCs, it is clear we are going to need innovation to meet these goals and initiatives," said Hui Wen Chan, a senior program manager in Citi's corporate citizenship program, at last week’s Social Innovation Summit.

INDCs are the Intended Nationally Determined Contributions of greenhouse gas emission reductions that countries have committed in advance of the meeting.

And the results work, based on a sampling discussed at a panel at the Social Innovation Summit. The Nature Conservancy’s migratory bird program is just one.

Omidyar Network, started by Silicon Valley entrepreneur and eBay founder Pierre Omidyar, calls itself a philanthropic investment network. It says its investment style transcends typical investing and traditional philanthropy, using market-based approaches but with a screen that the impact could be "catalytic" and likely can be scaled.

"We use market-based solutions to solve some of the world’s biggest problems," said Alex Lazarow, investments principal.

As a sampling of Omidyar's project, Lazarow mentioned how it is helping bring electricity into rural homes in East Africa that have been without electricity by financing purchases of small solar powered electricity generators that can provide enough electricity for a few light bulbs and light appliances. Families pay about the same amount monthly as they had spent to buy kerosene for lamps, but they are putting it into something permanent that brings electricity into their homes for the first time.

Access to electricity means a whole lot of things for a family, including facilitating education because kids can study at night. It also is an important step to bringing the family Internet access. Expanding access to the Internet and mobile communications  in Third World countries is one of Omidyar's key areas of focus.

Through its Financial Inclusion programs, Omidyar is financing mobile banking initiatives in which people not served by banks, and who therefore have been without traditional access to credit, can build up credit histories through paying back the bills on their cell phones, and tap into the economic enhancements that credit allows.

In yet another set of initiatives, Omidyar is financing open government and citizen participation initiatives, particularly in Mexico, Central America and India, and providing a platform that opens access to public information.

OpenIDEO focuses on the crowdsourcing and Big Data tools for this new economy.

“We provide a platform to source ideas,” said Jason Rissman, managing director of OpenIDEO, also speaking at the Social Innovation Summit. They do this by leveraging the reach of social media to bring ideas forth.

“We enable people everywhere to use design thinking in collaborative open settings to solve problems,” he said.

One recent example is its Renewable Energy Challenge, sponsored by the 11th Hour Project, which sought out ideas for how communities can lead the transition to renewable energy. Through social media it solicited ideas, receiving 347 contributions, 172 specific ideas and lots of feedback. It settled on 20 final ideas, and is financing several right now.

One of the winners was the Re-Volve.org's solar-seed program.  Re-volv functions as a revolving loan fund for renewable energy. It begins with crowd-funding campaign to raise money to lend to a community organization to install solar on its rooftop. Once that organization pays back the loan with a small amount of interest, that money is reinvested into solar installations elsewhere in the same community. Re-volv says the revenues from one project can fund three more solar projects. And each of those will fund three more. The idea is that solar installations would grow exponentially through a community. 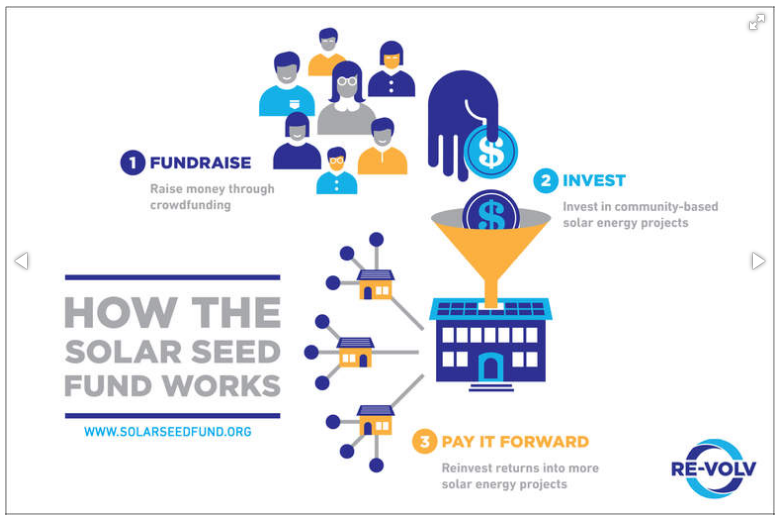 NatureVest on the reach of impact investing

Marc Diaz, managing director of NatureVest, told GreenBiz that a lot can be accomplished in conservation when you can provide a financial return along with the environmental return; in essence the dual focus makes available the vast resources of the capital markets.

“Our task is to structure deals that generate the conservation activity and result we hope and generate the financial returns that the investor expect," he said. There is a huge and growing appetite, “desire, really among investors to put their money to work in line with their values.”

But each potential project must undergo due diligence, as in any investment bank transaction, and some don’t make it.

“Not every conservation activity is investible, and not every investor can accept the returns we can deliver. The deals require a lot of scrutiny,” Diaz said.

Nonetheless the market for impact investing is growing exponentially. A study by EKO Asset Management Partners, NatureVest and JPMorgan Chase determined that $23 billion was committed to conservation impact investments in the four years of 2009-2013.

And that was when the economy was still trying to recover from recession. Think of what more may be ahead.