How innovative solar business models can benefit all

How innovative solar business models can benefit all

This story was originally published by the Rocky Mountain Institute's RMI Outlet.

The next time you’re on an airplane, take a look out the window at the city as your plane descends to its destination. How many solar PV arrays do you see atop (and around) that endless sea of rooftops? Probably not very many. Although distributed solar PV has been growing rapidly — 50 percent annually over the past decade — it’s still a small fraction of the overall U.S. generation mix. This means there is still a lot of room for additional growth.

But, importantly, there’s also a critical opportunity to make that new distributed solar an even more valuable resource to all electricity system stakeholders, including individual customers, utility and solar investors, the electric grid and society. Many of the largest opportunities to increase the value of distributed solar PV will require targeting opportunities that neither solar companies nor utilities can address alone. They will have to work together.

When we talk about the “value” of solar, or any electricity system resource, we’re referring to a simple formula: the difference between the benefits and costs that a project creates for an individual customer, the grid and society, or both. There are two clear avenues for maximizing the potential value of distributed solar PV: reducing the costs for manufacturing, developing and installing projects, and increasing the benefits that each project’s power creates for customers and the greater electricity system.

The solar industry has made tremendous strides over the past decade toward reducing project costs — decreasing costs by more than 60 percent since 1998. But several large cost reduction opportunities remain, particularly for solar’s “soft costs” — all the non-hardware-related costs of installing a solar PV system. Specific cost reductions that are ripe to target include:

The other side of the equation, increasing the benefits each distributed solar PV project creates, has received less attention to date, leaving substantial value uncaptured. Increasing these benefits will require a greater focus on three interrelated dynamics: the location where the project connects to the grid (e.g., a city’s urban core vs. its rural outskirts), the time when the project produces power (e.g., peak output at midday vs. the afternoon) and the specific services the project provides (e.g., energy, reactive power, voltage support, etc.). However, several efforts around the country, such as those in New York, California and Hawaii, are now under way to make distributed solar PV as beneficial as possible by investigating and implementing new design strategies. These include:

Taking steps to maximize the value of distributed solar PV can create a positive feedback loop: By making smarter, more-strategic decisions about where and how we deploy some of that distributed solar, we can reduce the need to invest in traditional grid infrastructure and reduce overall investment costs (which could free up more capital to invest in efficiency and renewables).

The need to work together

While reducing costs and increasing benefits sounds intuitive, many of the greatest opportunities cannot be tackled by a single stakeholder. For example, customer acquisition is one of the largest cost drivers for rooftop solar installations, often accounting for more than 30 percent of total installed costs. Today, solar companies spend significant resources identifying potential customers. Utilities have direct access to these customers and their energy consumption data. However, they have little incentive today to help solar companies drive down costs and expand solar’s market.

So why collaborate? All indications point to continued customer demand for distributed solar PV projects. As customers have projects installed on their roofs, without increased collaboration between utilities and solar companies there will likely be significant value left on the table, meaning that capital is being invested inefficiently. Further, a lack of collaboration leads to other suboptimal outcomes, such as more challenging grid operations and less customer engagement. While there is a clear need for collaboration, the existing business and regulatory models currently do not encourage it. But improved mechanisms can foster greater alignment and seek to provide “wins” for customers, solar companies and utilities. These “win-win-win” solutions can accelerate, optimize and sustain distributed solar PV adoption. 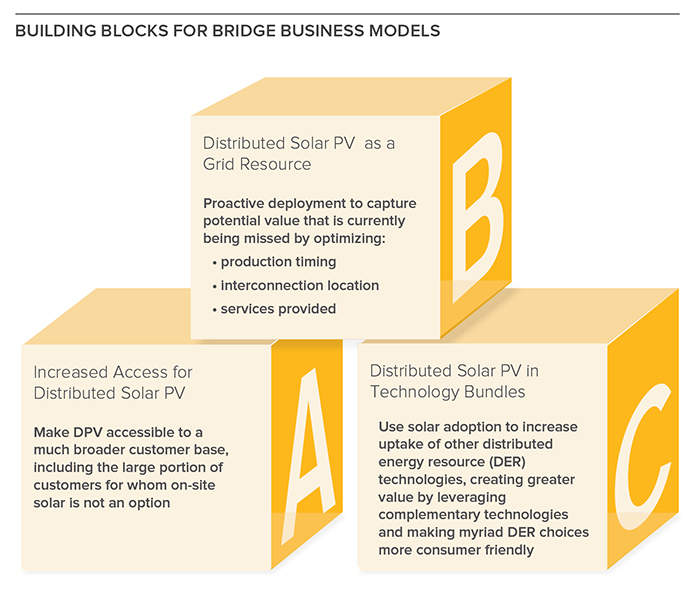 While the distributed solar PV market has been growing rapidly, ensuring sustained growth will require focusing on value creation. This may be difficult to capture if solar companies or utilities choose to act independently. But by focusing on collaborative solutions, utilities and solar companies can unlock additional value, increasing the net value of distributed solar PV to accelerate — and optimize — continued adoption.

How to deploy solar as a grid resource