Adapted from A Finer Future: Creating an Economy in Service to Life (New Society Publishers, 2018) by L. Hunter Lovins. All rights reserved. The book releases September 14, 2018.

The neoliberal narrative holds that a company exists solely to make money for its owners. If owners use their profits for philanthropy, that is noble. But it is not the job of the corporate sector, so the story goes, to worry about the woes of the world. 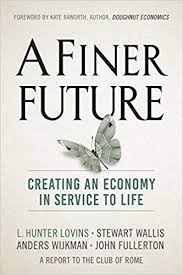 It’s an appealingly simple proposition, but that might better be called "Cheater Capitalism." Business as usual has been built on cheap access to the world’s resources, especially fossil energy. Access to these has historically been, and today remains, heavily subsidized. The $10 million a minute the world spends in energy subsidies is only the tip of the iceberg of ways that we make resource depletion look cheaper than it really is.

The neoliberal worldview, in which such fraud is celebrated as cleverness, has long believed that companies should "externalize" costs as much as possible. Indeed, companies spend a lot of money to lobby (or corrupt) regulators to ensure that only weak controls are ever imposed on them, arguing that if industry is unduly shackled, it will be unable to deliver the good life its customers want. Activists, in contrast, argue that only by punishing business and imposing draconian regulations can we save nature and our families. And so business and activists have remained in a standoff, the Earth roasts and collapse looms.

It is perhaps time to recognize that neither narrative is a useful one, and increasingly, neither is true. No one better proved this than industrialist Ray Anderson, who baldly stated, "In the future, industrialists like me will be in jail." He rejected the neoliberal narrative outright.

Ray was a South Georgia high-school football star. After taking his engineering degree at Georgia Tech, he went into the local business: carpets. When he was passed over for a promotion he felt he deserved, Ray, always intensely competitive, founded his own company, Interface. He proceeded to grow it into one of the largest carpet companies in the world.

In 1994, Ray added a European carpet company to his family of brands. Ray’s right-hand man, Jim Hartzfelt, reported that the acquired employees asked what Interface’s environmental policy was. Ray responded, "Do we have one? Quick, someone get me a book on the environment." Joyce LaValle, Ray’s head of human resources, handed him a copy of Paul Hawken’s "Ecology of Commerce," which, among many other things, described the environmental harm being done by businesses, and repeated David Brower’s observation that "you can’t do business on a dead planet." It was, the book argued, the responsibility of business to solve the crises facing humanity.

Ray’s right-hand man, Jim Hartzfelt, reported that employees asked what Interface’s environmental policy was. Ray responded, 'Do we have one?'

In the hundreds of speeches he thereafter gave each year, Ray described lying awake the night before he was to give the speech to his new employees, lamenting, "There is nothing about our company that is sustainable." He described the moment as a "spear in his chest."

And, he pledged, "We are going to be the first company of the Next Industrial Revolution." Ray was a businessman to his core, a fierce defender of capitalism, but in what he described as his "epiphany," he found himself answerable to a new metric that he named "God’s currency": non-financial costs and benefits that accrue to the planet and its people.

Ray created what he called his Dream Team, some of the best minds in sustainability, to advise him. Together they remade Interface into the poster child of corporate sustainability.

Ray named the adventure of becoming a regenerative company, the task to which he set Interface, "climbing Mount Sustainability": to operate our petro-intensive company (for materials and energy) in a way that takes nothing from Earth that is not naturally and rapidly renewable, and does no harm to Earth’s biosphere, not another fresh drop of oil, no greenhouse gases or other harmful emissions — factories without smokestacks.

Ray’s effort to make Interface the most sustainable company on Earth was far from easy. Investors thought he’d lost his mind, especially in the Y2K scare, as companies bought computers, not carpets. Ray’s answer? "It’s my job to go round the bend and see what’s out there, what most people can’t see yet." Because Ray owned 51 percent of the company, he could stay the course.

David Oakey, Interface’s lead designer, reacted to Ray’s challenge to make a carpet that was recyclable and itself made of recycled materials, by saying, "Boss, it can’t be done."

"It has to be possible," Ray replied, "Nature does it."

Interface invested in a largely unknown biologist, Janine Benyus, and the corporate practice of biomimicry was born. Teaming with Oakey, Janine and the Dream Team innovated to close the company’s industrial loops and create an early example of the circular economy. When Oakey reported on his success at a Dream Team meeting, his eyes were big as saucers. "God must be an environmentalist," he marveled. "I said it couldn’t be done, but when we did it, it worked better, cost less, had every attribute we wanted and many we hadn’t thought to ask for."

When Ray and Mike Bertolucci, Interface’s director of research, proudly announced that they had figured out how to make carpet from corn, Hunter Lovins, a Dream Team member, replied, "You realize that you’re now in the business of sustainable agriculture?" Ray laid his head on his desk and moaned, "Is there never an end?"

'God must be an environmentalist,' he marveled.

But then he picked his head up, turned to Mike and said, "No, that’s what it means to be responsible. Let’s figure it out." Several years later, the industrial giant Cargill announced that it was selling a line of non-GMO corn precisely to satisfy Interface’s demand for sustainable feedstocks.

Interface has not yet summited Mount Sustainability, but the company’s achievements are impressive:

Interface reckons that it is halfway to its Mission Zero goal of zero impact, zero footprint by 2020. And it remains committed to achieving it. Some at Interface are nervous, acutely aware that 2020 is near. Some say it will take a miracle. Hartzfelt dismissed such concerns: "People don’t realize that it took five or six miracles to get this far; Interface has always been in the miracle business."

The right thing is profitable: The business case for sustainability

As impressive as these numbers are, Ray was always clear that unless his commitment to sustainability gave him the means to crush his competition, it would be a valiant effort in vain. He believed that greater sustainability would earn him goodwill and customer loyalty, and it did, but he expected to have to pay for those attributes.

It came as almost as big a surprise to him as it was to Oakey that their sustainability efforts not only made Interface more effective but dramatically enhanced the company’s bottom line. His commitment to behave in more sustainable ways enhanced every aspect of shareholder value. It kept his company alive as several competitors went out of business. It created unprecedented employee engagement and customer loyalty. It also drove his innovation.

Savings from sustainability paid for all of the costs of the transformation and became an enduring source of profit. In the first four years of Interface’s work on sustainability, sales increased by two-thirds, profits doubled. Cutting waste 40 percent created $76 million in cost savings. By 2000, annual savings were $185.4 million.

By the mid-aughts, reports from the big management consulting houses confirmed each aspect of the ways in which companies that led in efficiency, social responsibility, good governance and other aspects of corporate sustainability outperformed less sustainable peers.

Every three years, Accenture surveys 1,000 CEOs from more than 100 countries. The 2013 report found that while a strong majority believed that a corporate commitment to sustainability is a path to growth and innovation (78 percent), conferring competitive advantage in their industry (79 percent), only 38 percent felt that they could quantify the business value of such programs to their company. Only 15 percent felt that they had made sufficient progress in the prior three years in making their sustainability commitment a must-have asset for customers, and 82 percent saw this as crucial to enabling greater sustainability to transform the economy. Analysts concluded that corporate sustainability had plateaued.

Analysts concluded that corporate sustainability had plateaued. By 2016, attitudes had shifted.

By 2016, attitudes had shifted. Almost 60 percent of CEOs surveyed said that they could accurately quantify the business value of their sustainability program to their company. Ninety-seven percent believed that sustainability is important to the future success of their business, and 53 percent felt that business is making sufficient efforts to address global challenges. Transparency was seen as a critical factor, with 79 percent seeing brand, trust and reputation as driving action on sustainability.

Corporate social responsibility has come a long way from the days when most companies were what sustainability analyst Bob Willard calls "pre-compliant," getting away with as much as they could and only reluctantly obeying the law. Smart companies discovered that implementing efficiency saved money. Some then moved on to integrating sustainability throughout their operations.

The leaders are finding, as Ray Anderson did, that when you embed sustainability into your company’s core mission, it transforms your business. It moves a company from one focused on serving Wall Street analysts by delivering ever-increasing quarterly profits to one in which enhanced shareholder value is recognized as an outcome of behaving responsibly to people and to planet.

When well-managed, a commitment to sustainability creates savings that compound essentially infinitely.

One problem is that after a few years these savings are forgotten, new accounting baselines reset the bar and normal corporate life goes on. But when calculating whether there is a business case for initiating a sustainability program, remember that the years’ worth of costs not incurred, resources no longer needed, and harm not caused ought to be given a place in net present value calculations. 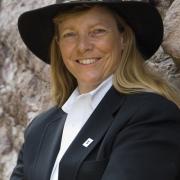