For many years environmentalists have urged the public to "think globally, act locally" — consider the health of the planet, then take action in your own community.

But this approach can have unintended consequences. In a recent study, I worked with colleagues from academia, government and the nonprofit world to gather examples of fishery, forestry, agriculture and biofuel policies that appeared successful locally, but on closer inspection actually created environmental problems elsewhere, or in some cases made them worse.

For example, in my field of fisheries ecology and management, one strategy for managing the problem of bycatch — when fishermen accidentally catch non-target species, such as sharks, sea turtles and dolphins — is to reduce local catch limits. But when the United States curtailed Pacific swordfish catch between April 2001 and March 2004 to protect sea turtles, U.S. wholesalers imported more swordfish from other countries’ fleets operating in the Western and Central Pacific.

These fleets subsequently caught more swordfish to meet continued U.S. market demand. In the process, the number of sea turtles unintentionally hooked by fishermen increased by nearly 3,000 compared to before the closure.

My colleagues and I see this pattern, which scholars often call leakage or slippage, as vast and growing. To help address it, we identified ways to avoid taking actions that just displace environmental harms from one place to another rather than reducing them.

Persuading consumers to reuse excess materials, such as reclaimed wood, is one way to reduce demand for virgin materials.

Once environmental problems are addressed locally, people often assume that they have been solved. But if demand for whatever they are trying to conserve — land, wildlife, energy resources — stays high, people will obtain them from other sources. In the process, they cause environmental damage in locations or economic sectors that are less strictly regulated.

These scenarios often shift impacts from developed nations to emerging economies. For example, a study based on data from 2001 indicated that 31 percent of timber harvest reductions in the United States were shifted to less developed nations, including tropical forest countries in South and Central America, Southeast Asia, and west and central Africa as well as boreal forest countries such as Russia. Companies sought timber from these countries to satisfy demand in the United States and other parts of the world created by reduced U.S. exports.

Such effects are common in forestry. One study estimates that 42 to 95 percent of logging reductions in specific countries or regions are shifted elsewhere, offsetting environmental gains. Less wealthy countries that get the additional business often benefit economically, but in many cases they have not yet developed policies to help ensure that they use their natural resources sustainably. 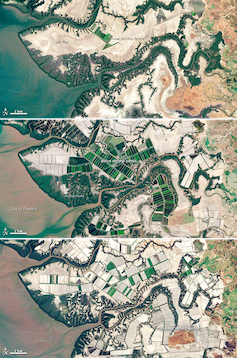 Expansion of shrimp farming for export along the Gulf of Fonseca in Nicaragua and Honduras from 1986 (top) to 1999 (middle) to 2011. As the industry expands, shrimp ponds move closer to coastal mangrove fringes and waters in the gulf become increasingly clouded with sediment. NASA Earth Observatory, CC BY

The U.S. Conservation Reserve Program, which pays farmers to take environmentally sensitive land out of production and plant it with species that will improve its health, also may cause such effects. One study found that between 1982 and 1992, Midwest farmers retired 17.6 million acres under the Conservation Reserve Program, but simultaneously brought at least 3.7 million acres into production — possibly because cropland retirements drove up crop prices. This offset 9 percent of water and 14 percent of wind erosion reduction benefits from retiring the original croplands.

In a world where markets are becoming ever more globalized, it is urgent to limit negative environmental impacts of resource use, rather than just displace them from one region or nation to another. There are a number of ways to do this.

To assess whether a policy will cause environmental harm elsewhere, it is important for natural resource managers and policymakers to understand the relationship between demand for a product and its supply. For example, when prices of hardwood species are high, more environmentally conscious consumers or those on a budget are likely to use bamboo or other materials for flooring instead.

However, some varieties have unique features or connote social status. Examples include rosewood, highly prized for uses that include musical instruments, and shark fin soup, a dish viewed by many Asians as a symbol of wealth and prestige. Because these materials often are rare, possessing them becomes a sign of social status, which can stimulate wealthy consumers to purchase more (automatic PDF download). Conserving them may require other actions, such as special legal protection for source species.

Governments and environmental groups also can use marketing campaigns to reduce demand for scarce resources, educate consumers about the consequences of their purchasing decisions and encourage producers to be transparent about the environmental impacts of their products. Examples of such efforts include eco labels, traceability programs and consumer guides, which have been widely implemented for forestry, fisheries and agricultural products. 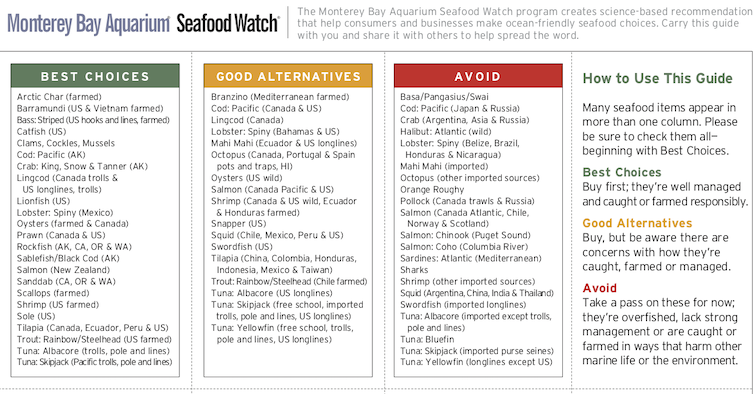 Studies show that such tools can produce real environmental benefits, such as increases in fish stocks and in support for creating protected areas. Most of these improvements appear to be made by industries that must make significant changes before they can join these programs. For example, fishermen may need to shift away from traditional but destructive fishing practices before their catch can be certified as sustainably caught. These programs often are more successful in developed countries that can finance such steps than in emerging economies.

Natural resource conservation policies are a fundamental tool for using Earth’s resources responsibly and sustainably. In a world where consumers can purchase products made on the opposite side of the planet, these policies must look beyond their own jurisdictions. If not, well-intentioned conservation efforts may create only the illusion of protection. 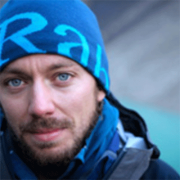 See all by Andrew Frederick Johnson