Dell created a closed-loop recycled plastics supply chain to recycle computers back into new computers. Philips sells lighting as a service instead of a product a consumer would purchase and own. DSM developed a cellulosic ethanol in which agricultural residue is converted into renewable fuel.

These examples, taken from Achieving a Circular Economy: How the Private Sector is Reimagining the Future of Business, help illustrate the concept of a circular economy, in which resources are endlessly cycled back into supply chains and waste does not exist.

The linear take-make-dispose economy, highly successful in delivering economic development throughout the 20th century, is no longer viable for continuing progress in the 21st century. Our current systems of commerce and production processes follow the linear model, in which very little attention is paid to how product — and its components — will be used and reused over and over. The result is most resources are used merely once or for a single purpose and then discarded as waste.

In the U.S. Chamber of Commerce Foundation and Trucost research report "Trash to Treasure: Waste Streams to Profit Streams," we identified that the 5,589 largest publicly traded companies in the U.S. sent 342 million metric tons of waste to landfills and incinerators in 2014. The figure below illustrates that waste by type across all industries. 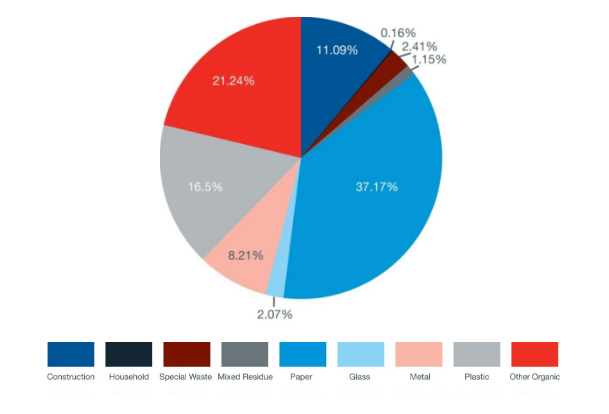 On average, companies generate 7.81 metric tons of waste for every million dollars in revenue. If those same 5,589 companies reduced their waste by 1 percent, it would save nearly $1 billion in total.

The report highlighted that companies are not accurately estimating, measuring and managing their waste streams, which means they are throwing away huge opportunities for profit and increased efficiency. Adopting circular or closed loop methods is the best way for companies, regardless of size or industry, to eliminate waste and recapture its value.

The report features examples of companies using broader circular economy programs to eliminate waste by design or intention. To help manage freshwater use and reuse on site, Dow has collaborated with private-sector companies and the city of Terneuzen, the Netherlands, to implement a program in which its plant accepts wastewater each day from the city, has it purified by a third party and reuses it for its industrial processes. As a result, the site reuses 30,000 cubic meters of municipal wastewater each day and has reduced its energy use associated with water treatment by 95 percent.

The circular economy is, at its core, an economic innovation opportunity. It is about an opportunity where we are rethinking the business models and material choices we make so products and materials can be upgraded, remanufactured and kept in production longer, and converting products as they are currently designed and produced and used to new services and revenue models.

Companies are not accurately estimating, measuring and managing their waste streams. ... They are throwing away huge opportunities for profit and increased efficiency.

All this represents tremendous opportunity for business and the global economy. Shifting to the circular economy could unlock an estimated $4.5 trillion in additional economic growth by 2030 by turning current waste into wealth and could be the biggest economic revolution in 250 years, according to research from Accenture. The circular economy represents a net materials cost savings opportunity of $340 billion to $630 billion annually just within the European Union, according to the Ellen MacArthur Foundation.

Designing a circular system will often require a reconfiguration of a company’s model and business practices. But how exactly does company enter the circular economy and optimize its value over the long-term?

To help answer these questions, the U.S. Chamber of Commerce Foundation, in partnership with the Ellen MacArthur Foundation, is hosting Better Business: Better World: Mainstreaming the Circular Economy May 16-17 in Washington, D.C. This event will provide an interactive platform to explore how to make the leap from linear to circular models and practices, and how to apply those practices on a global scale to achieve a world — and a future — without waste.

The 5 business models that put the circular economy to work

Nike and H&M try reused threads on for size