How Kraft Heinz cooked up its post-merger sustainability strategy

Its extensive materiality assessment was the starting point.

For two years, investors and other stakeholders have hungered for more information about progress on the corporate sustainability program at Kraft Heinz, the giant multinational created through the $46 billion merger of Kraft Foods Group and H.J. Heinz in 2015.

In early December, the world's fifth largest food and beverage company — with brands ranging from Kraft Macaroni & Cheese to Heinz Ketchup — whet their appetites with the release of its inaugural combined corporate social responsibility (CSR) report. (It plans to release updates every two years in the future.)

The 70-page disclosure offers a taste of meaningful progress, but it will leave stakeholders hungry for more.

For example, Kraft Heinz sources 100 percent of its palm oil from suppliers certified by the Roundtable on Sustainable Palm Oil (90 percent of that is traceable down to the mill level). It also has managed to achieve landfill-free status for six facilities: two in Minnesota; one in Arkansas; one in Canada; and one in Poland.

The report also sows the seeds for lots of hard work in the years to come through a series of detailed goals. For example, Kraft Heinz last year made an aggressive commitment to buy only eggs laid by cage-free hens by 2025 (it's a third of the way there). What's more, Kraft Heinz plans a 15 percent reduction for water consumption, greenhouse gas (GHG) emissions, energy usage and waste-to-landfill per metric ton of product made by 2020 (compared with where the newly combined company started in 2015. Last year, its progress against those metrics was relatively modest with a reduction of 1.4 percent in water, 3.6 percent in energy, 5.1 percent for GHG emissions and 9.5 percent in waste. 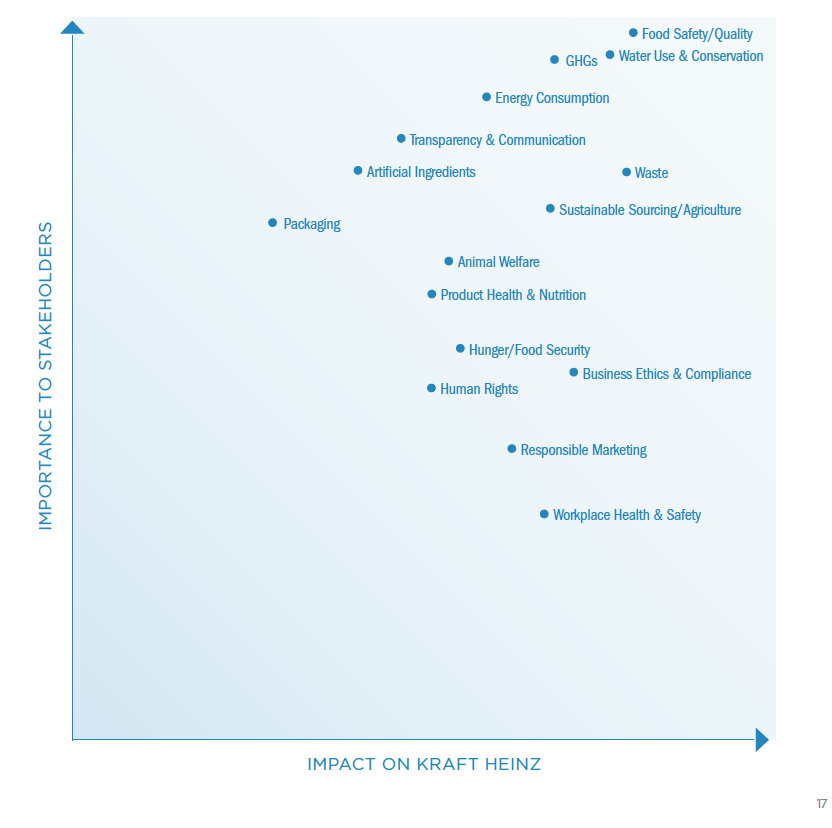 Every one of these commitments was inspired by a materiality assessment conducted during the process of integrating the two legacy companies into one operation, observed Caroline Krajewski, director of corporate social responsibility at Kraft Heinz. While the company's strategy obviously builds on the successes and experiences of the two previously separate organizations, the team also took advantage of the opportunity to start with a clean slate where possible. The three issues at the very top of the list uncovered by the material assessment exercise: food safety/quality; water use and conservation; and GHGs.

"Any CSR action of any significance and that includes a commitment or target or position or policy, whatever, those are all brought in front of our board of directors for review and approval," Krajewski said, describing the company's governance philosophy.

That shift should sit well with shareholders and customers that have been pushing for heightened disclosure and accountability at Kraft Heinz, especially given the close focus that competitors such as Campbell's Soup Company and ConAgra have put on managing risks related to climate change.

"We are experiencing unprecedented challenges in our industry today — from resource scarcity and climate change to food insecurity and an ever-evolving consumer," wrote Kraft Heinz CEO Bernardo Hees, in the CSR report. "That’s why we’re more active than ever before in advocating for the sustainable health of our people, the planet and the communities where we live and work. It’s the right thing to do for the long-term growth of our Company, and it’s the right thing to do for the well-being of society at large."

One of the first issues to get the combined team's attention was palm oil sourcing because of its potential impact on operations. During the integration process, Kraft Heinz assembled a steering committee that could build on the knowledge of both companies, including perspectives from procurement, CSR, operational risk management, quality, and research and development.

"It quickly became apparent that our biggest need and one of our biggest gaps was we needed to have a formal global sustainable palm oil policy," said Julio Quintana-Castillo, senior manager of sustainability for Kraft Heinz. "We needed to have something that was accurate, relevant. A document that clearly specified what we stood for, what we wanted to accomplish, what our expectations were, and how we were going to achieve that."

It also quickly became clear that the company needed the guidance of an external partner to develop this policy, Quintana-Castillo added. Ultimately, the team tapped Rainforest Alliance to help with that process. "This partnership has proven very effective, and we're very happy with our collaboration so far," he said. "And we are continuing our work with them in other spaces beyond palm oil, hopefully, in the future. Addressing deforestation for other at-risk commodities." 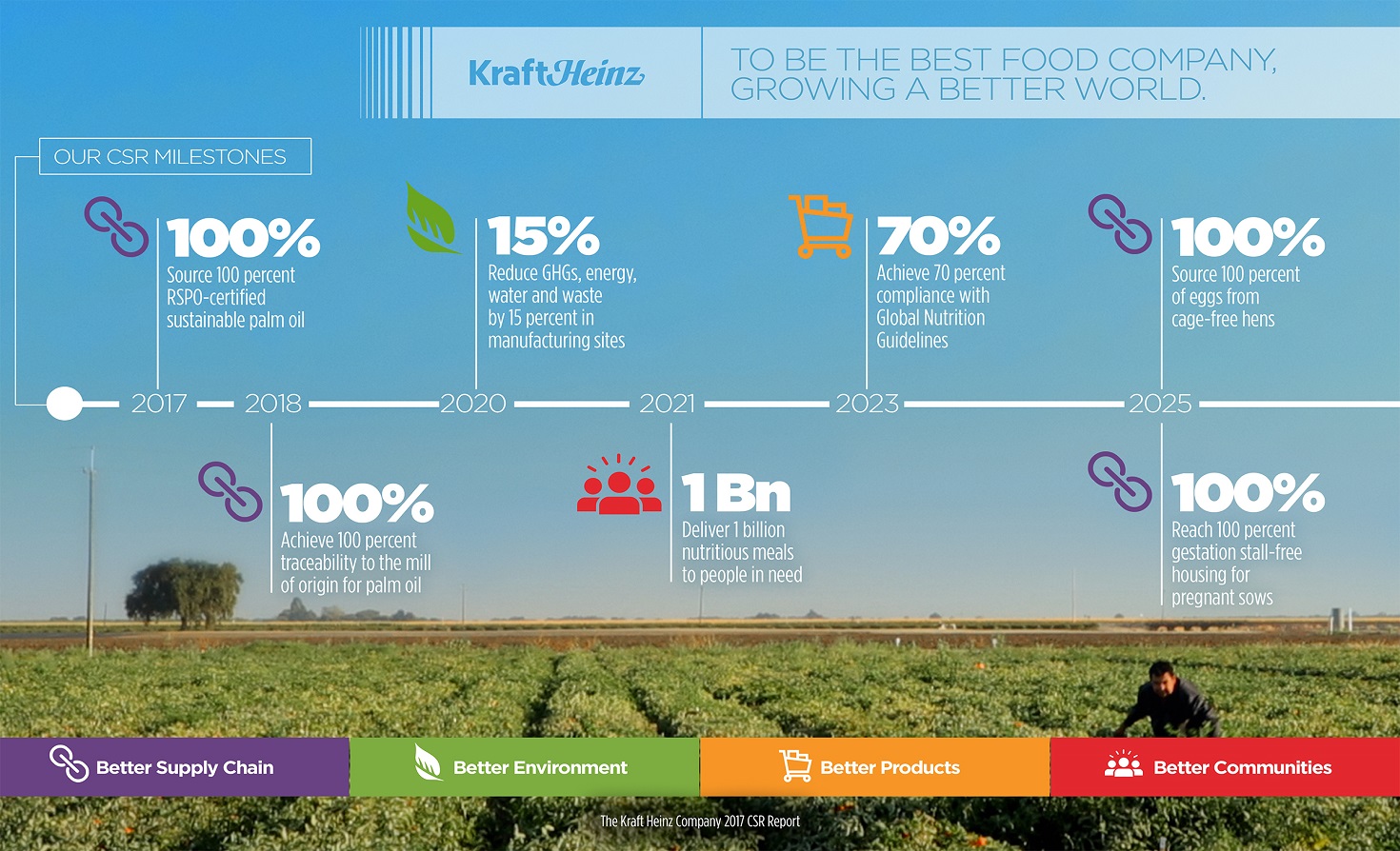 Over the past two years, Kraft Heinz has invested in systems for monitoring and managing key environmental metrics, particularly energy, so that sites around the world can share information about investments or process changes that have helped with reductions.

For example, the results of LED lighting retrofit in Bribane, Australia, that helped cut power consumption by 1 percent are helping convince other plants to do that same — reducing maintenance costs and utility bills, while improving lighting levels. The system also has been used to document issues that could affect efficiency, such as leaks in the compressed air equipment at a plant in Granite City, Illinois, that turned out to be inflating electricity usage.

"Resources from all of these functions collaborate with each other and across plants and across business units to communicate a lot of these best practices and initiatives or challenges," Quintana-Castillo said. "If there's something that doesn’t work, something that we need to pay attention to that was a lesson learn, that we may not want to implement because of certain challenges — we share those as well."

One notable example is the waste reduction strategy developed at a plant in Mason, Ohio, that produces single-serve products such as jelly, ketchup, hot sauce and salad dressings. After a curious production manager began weighing the waste on its production lines, the entire facility rallied around new procedures to keep less of these sauces from falling into the floor. The result was a dramatic reduction of waste to landfill: 106 tons during the first year, along with a $2 million savings in yield losses. The procedures used in Ohio, including the installations of whiteboards used to track waste, are used across the company's entire global manufacturing footprint.

Up next, a heightened focus on reducing water consumption

During the next 12 months, Kraft Heinz will tap more resources to address its water consumption strategy — a timely development given the strain that its plants can place on local supplies. An expansion in Lowville, New York, for example, last summer triggered shortages in the community — although the plant's increased consumption had been predicted, it still caused the local community to adopt unanticipated conservation measures, according to local news reports about the situation.

That process is meant to identify sites that should be addressed first, so that can programs can be introduced in phases, Quintana-Castillo said. According to the CSR report, technology that allows the company to better manage its water chemistry already has been installed at 52 sites globally.