With millions in state funding, a new startup incubator has begun luring water innovators to Las Vegas. The goal is to create a destination for water entrepreneurs akin to the culture of Silicon Valley.

Can the city of excess teach the world to thrive on less water? That’s the new goal.

In 2015, Nevada governor Brian Sandoval and his office of economic development dedicated $1.8 million to launch WaterStart, a think-tank and startup incubator organized to lure new businesses that would push the envelope on water-related technology. This year, the state doubled down on that investment with $1.6 million more awarded in July.

And the strategy has worked. WaterStart, with offices in Las Vegas, has lured 11 companies to the state through a competitive application process. Acting as a kind of startup incubator, WaterStart offers the winning applicants research grants, office space and networking opportunities.

In its most recent quarterly report (PDF), WaterStart projects that these 11 companies will generate 180 jobs over the next two to three years. It also estimates its work so far will contribute to six patents being awarded.

This direction might seem odd for a city that features flamboyant splashing water fountains and artificial lakes outside nearly every major hotel-casino on the Strip. But WaterStart executive director Nate Allen said it’s actually a perfect fit: Over the past decade, the Las Vegas metro area has transformed itself into a national leader on water conservation.

"Nevada is the driest state in the U.S. It’s no surprise there’s demand for technology to help us improve how we manage our water here," said Allen. "Our hope is that by trying to coordinate demands for innovation we’ll end up attracting a cluster of technology companies, and create an ecosystem that kind of feeds back in on itself."

WaterStart works with four large partners who are leaders in the state’s water landscape: the Southern Nevada Water Authority, the Truckee Meadows Water Authority, MGM Resorts and Winnemucca Farms (the state’s largest food grower). Each makes annual payments of $25,000 to $50,000 to partner with WaterStart, giving them a hand in guiding the organization’s search for new technologies, as well as first dibs on any pilot projects. 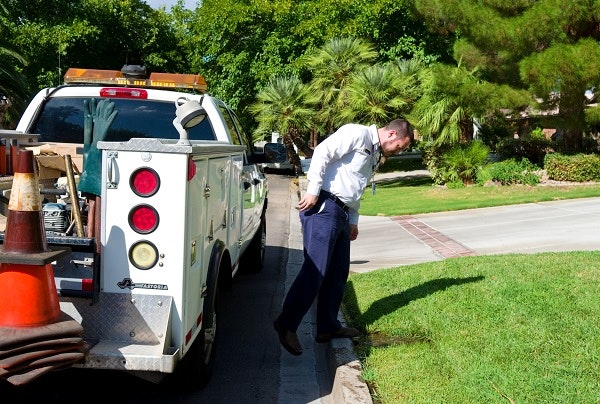 Another important partner is the Desert Research Institute, an environmental research nonprofit attached to the state university system. The institute helps WaterStart and its incubator companies test their inventions.

WaterStart and its four water partners developed a priority list of innovations they want to encourage. These include water conservation improvements for hotels and commercial kitchens, technologies to capture nitrates and phosphates in wastewater as a resale commodity and identifying operational efficiencies for water utilities. It offers grants of up to $100,000 to companies with promising innovations that target the priority list.

The eighth round of grant funding was announced (PDF) Oct. 10, with proposals from companies due by Oct. 27.

One example is a software system developed by an Australian company called RedEye to help utilities organize their engineering drawings. The software is cloud-based and mobile, allowing engineers to access records anywhere.

The thing that attracted us to Nevada, mostly, is the infrastructure they offered and the ability to link us up with the end customers.

It may seem esoteric, but actually locating the right plans before, say, digging up an old water line can be challenging for a utility with a century of engineering records. If the right drawings can’t be found, new drawings must be commissioned before a single shovel of dirt can be turned.

"Well, that cost gets passed on to the ratepayer," Allen said. "We really see any technology that helps a water manager more efficiently and reliably provide services — that’s a water technology."

With WaterStart’s help, RedEye opened its first North American headquarters in Nevada and brought along two employees from Australia. It hired a third employee, and plans to hire eight more as it grows. The Southern Nevada Water Authority is using the software to organize thousands of engineering drawings.

Another Australian transplant is STAR Water Solutions, which uses natural materials to build stormwater filters. The company treats polluted stormwater by assembling the right combination of soils and plants from the same local area in which the stormwater problem exists.

It developed a software program that helps identify filter materials to deal with different pollutants. The goal is to use natural materials to develop low-maintenance filters that can help capture stormwater, thus reducing flooding concerns, and to transform it into clean water for reuse.

With WaterStart’s help, STAR opened an office in Nevada and has begun working with two manufacturers — one in Las Vegas and another near Reno — to build its filters. It is also working with the Desert Research Institute to test the filtering capabilities of natural materials found in Nevada.

"The thing that attracted us to Nevada, mostly, is the infrastructure they offered and the ability to link us up with the end customers," said chief executive Chris Rochfort. "I’ve got something like seven to nine pilot projects on the books from one day’s worth of meetings. That’s pretty amazing for a company from Australia."

Rochfort said he expects the company will hire 10 to 20 people over a three-year timeframe, and its manufacturing in the state is expected to contribute to more employment.

Everybody and their mother wants to claim their city is going to be the next Silicon Valley.

Not everyone is thrilled with WaterStart’s direction. Howard Watts, spokesman for the Great Basin Water Network, a Nevada-based environmental group, said the program seems overly focused on the needs of its four large water-user partners, and on urban water issues.

About five out of six Nevadans live in either the Reno or Vegas metro areas. Yet Watts would like to see more of WaterStart’s work address rural needs in the arid state, such as new ways to treat and track groundwater and protecting water resources from mine contamination.

"In principle, we totally agree Nevada should be a leader in water innovation," Watts said. "But a lot of what they’re aiming at is helping out the [Vegas] resort corridor. Most taxpayers or ratepayers won’t really see a direct benefit. We should make sure we are doing things that are going to support all our communities."

He also said WaterStart should add desalination technology to its priority list. While it’s unlikely Nevada will tap the ocean to meet its water needs, breakthroughs on desalination could help treat brackish groundwater in the state.

Innovation also could make desalination cheaper and more environmentally friendly for California and Mexico, with whom Nevada shares Colorado River supplies. If they obtain more of their water from the ocean, Watts said, it would take pressure off the Colorado River, potentially easing that supply for Nevada.

Allen said WaterStart is working on projects that support rural areas. For instance, Winnemucca Farms has been the nation’s largest potato grower for many years. But potatoes are relatively thirsty, so the company wants to transition to less water-intensive crops, such as snap peas.

So one of WaterStart’s goals is to support research into new food crops and growing methods that are appropriate for Nevada. This will help farms prosper with less water, which then helps rural communities that depend on farming.

The organization is only two years old. Allen hopes it evolves to a point where entrepreneurs and investors are drawn to Nevada simply because it provides a great laboratory for solving water problems. Which is sort of what happened as Silicon Valley evolved by creating the semiconductor, the building block of the computer age.

"Everybody and their mother wants to claim their city is going to be the next Silicon Valley," Allen said. "The fantasy would be that we wouldn’t need to be here in 10 years. That we’ve helped drive enough of an ecosystem where you don’t need a contrived organization to do the matchmaking."