How Marks & Spencer is cooking its way to a cleaner future

How Marks & Spencer is cooking its way to a cleaner future

When you think of clean cookstoves, Marks and Spencer (M&S) is not the first name that comes to mind. And yet the U.K.-based retailer is the first in its sector to commit to increase the focus on clean cooking with the Global Alliance for Clean Cookstoves, building off its positive experience with a UNICEF-developed improved cookstove project in Bangladesh.

This commitment to clean cookstoves is the latest offshoot of the company's sustainability plan, known as Plan A. The company launched Plan A in January 2007, establishing 100 commitments to achieve in five years, including a carbon neutrality goal. The plan since has been updated to Plan A 2020, with the company setting a goal of becoming the world's most sustainable retailer.

"Climate change is a big issue for business, especially retail that relies in raw materials being available to sell," said Carmel McQuaid, head of sustainable business, Plan A at M&S. "There was always a focal point on how to become carbon neutral."

The retailer began implementing its Plan A goals by looking for opportunities to lower emissions within its own operations, such as energy efficiency improvements and the use of renewable energy. Efficiency improvements alone — including in stores and across its fleet of trucks — account for reductions of around 16,000 tons of carbon dioxide (CO2) per year in the company's U.K. and Ireland operations, according to the firm's website. The company's gross global CO2 emissions for 2013 were 566,000 tons, according to its Plan A report 2014. 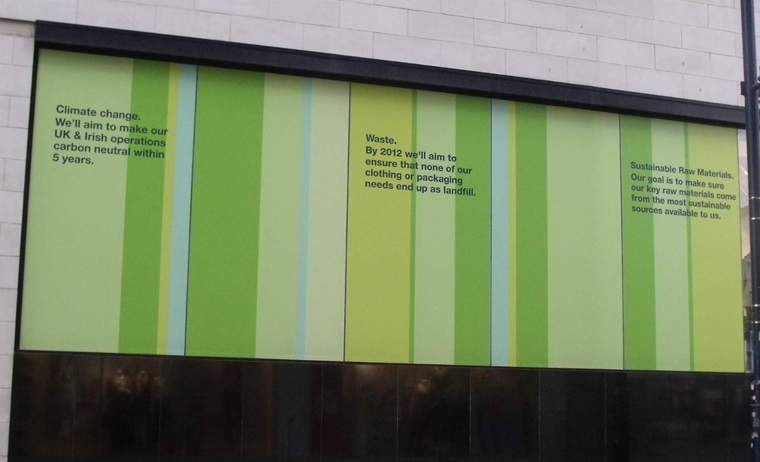 FlickrElliott Brown
This 2011 photo shows some of the ever-expanding retailer's green goals.

By 2012, McQuaid said progress was evident. "But there's only so far energy efficiency and renewable energy can go to deliver reductions in the timeframe science indicates is required," she added.

The firm turned to the voluntary carbon offset market to help meet its carbon neutrality target, working with The CarbonNeutral Company — and in the process, becoming the fifth-largest voluntary buyer of offsets, according to a new Ecosystem Marketplace report that analyzes CDP data.

M&S has purchased carbon offsets from the Kasigau Sustainable Farming project in Kenya developed according to a Verified Carbon Standard (VCS) methodology, the VCS Sabah rainforest rehabilitation project in Borneo and a VCS waste-to-energy project in Wuhe, China, among others.

"Ideally, we would have wanted to buy from projects closely related to our business, but there's not a lot [of offsets] in the market via supply chains," McQuaid said.

Once M&S signed the contract to work with The CarbonNeutral Company, the retailer said it also was keen to work with an NGO partner to find ways of making the carbon finance go further and bring more benefits to the communities, she said.

"M&S asked its NGO partners if they had any interest in carbon finance to extend their programs, and UNICEF stuck its hand up," said Rebecca Fay, London-based global marketing director for The CarbonNeutral Company. The NGO presented a couple of clean cookstove projects, and the Bangladesh one was deemed "the best fit, in terms of what was already in place to get the project developed and its alignment with M&S's business," she said.

Over the next 12-18 months, the three organizations worked closely together, with UNICEF new to the carbon finance sector and M&S new to clean cookstoves. This learning process was a real eye-opener for M&S, McQuaid said.

"Because we worked so closely with them [UNICEF], we really realized the benefits of [improved] cookstoves that, if someone had just walked in with a marketing brochure, we wouldn't have realized," she added. Improved cookstoves use less fuel wood than traditional stoves, reducing the risk of pollution-related ailments and lessening the need for women to embark on often-dangerous trips in search of fuel.

The investment by M&S allowed the project to get off the ground and enabled the first 40,000 stoves to be installed — a process completed by November — and the first verification under the Gold Standard is imminent, Fay said.

Beyond this initial investment, however, M&S officials want to raise awareness of the sector among other corporates, so officials decided to join the Global Alliance for Clean Cookstoves rather than duplicate its outreach efforts. Its commitment, announced at the Alliance's inaugural Commitment Roundtable, as part of its Cookstoves Future Summit in November in New York, comprises three parts: to work with its suppliers to understand how employees of M&S suppliers of products such as textiles, coffee and food currently use cookstoves; to promote the UNICEF project; and to work with the U.K. government's Department for International Development to raise awareness and share its experiences.

The retailer started working on these pledges even before the November summit. Together with The CarbonNeutral Company, M&S organized a roundtable in April 2014 — which included a BBQ using cookstoves — with executives from about 15 firms to showcase the Bangladesh project and encourage others to get involved.

M&S is also working with the Alliance to increase the uptake of clean cookstoves, particularly in its key supply chain countries of Kenya, Uganda and Ghana. By working with its suppliers, the firm wants to identify the barriers to clean cooking, including cost, awareness and education. While the company is open to participating in the development of more cookstove projects, the focus is on recognizing these barriers and determining who can best intervene, McQuaid said.

"If we can align it with our supply chain, that's also good," she said.

Can businesses help banish the shadow of black carbon?