How microplastic particles are turning the oceans into plastic soup

The accumulation and concentration of marine plastics have grown significantly over the past half-century. Here's why that matters.

The following excerpt is from Michiel Abbing's book Plastic Soup: An Atlas of Ocean Pollution (Island Press, April 2019) and is reprinted with permission from the publisher.

Determining how much plastic ends up in the oceans each year is complex. Scientists often quote a 2010 estimate that the 192 countries in the world with coast­lines were together responsible for about eight million tons. That is about as much as a truckload of waste being tipped into the ocean every minute of the year.

Unless there are improvements, this will be two truckloads per minute by 2030. By 2050, it will be four truckloads a minute, and by weight, the seas will contain more plastic than fish.

The contributions of each country to plastic soup vary greatly, determined primarily by population size and the presence or absence of a waste dis­posal infrastructure. The figure of eight million tons does not take into account what ended up in the oceans in the years before 2010, or the contribu­tions that shipping and fishing make every year to the plastic soup. On average, about 80 percent of the plastic comes from the land and about 20 from maritime sources.

In other words, the total amount of plastic added in 2010, including from maritime sources, was ten million tons rather than eight million. 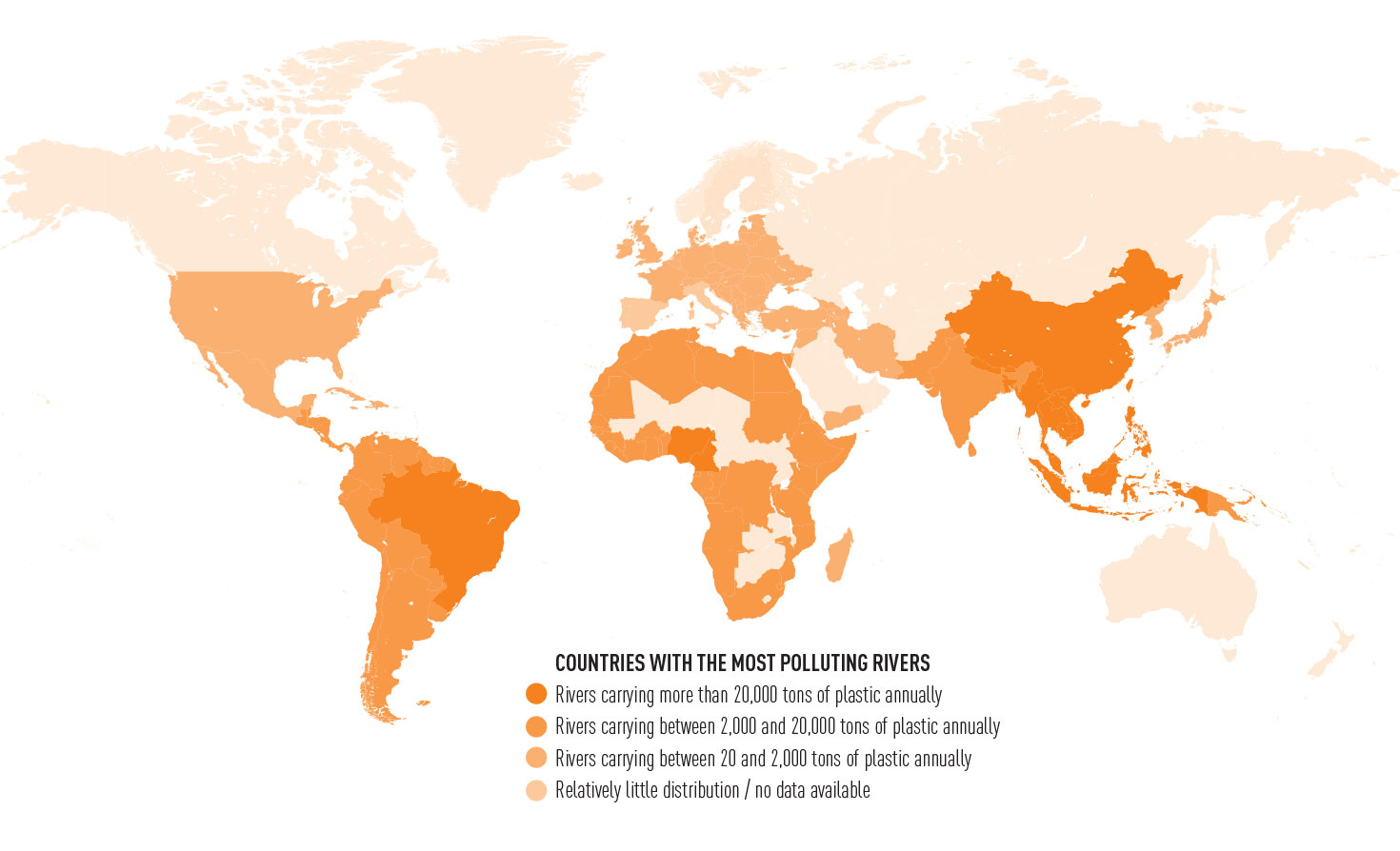 All that plastic does not degrade naturally and will remain in the environment. Cleaning up beaches and coastlines does help reduce the amount of plastic soup. Everything that washes up and is cleared away has after all been removed from the environment. The amount of plastic in the world's seas is accumulating neverthe­less: more is flowing in than is being cleared.

Although a proportion of the plastic is carried by the major ocean currents to the centers of the five subtropical gyres, the heaviest concentrations are found elsewhere. Specifically, they are found in the coastal waters off densely populated areas such as the many cities in Southeast Asia and elsewhere that are home to more than one million people. The beaches near Durban in South Africa, for example, are chock-full of plastic after every storm. Inland seas are a separate problem.

The amount of microplastics and nanoplastics have risen exponentially in a rela­tively short time. It may mean that it is already better to speak of a plastic broth rather than a plastic soup.

The con­centrations in the Mediterranean are increasing, because that particular sea only has a limited con­nection to the Atlantic. What goes in, stays there. The Red Sea and the Black Sea are among the most polluted in the world for the same reason. Countries that are located near the ocean currents are exporting their plastic, as it were. After a voyage lasting between two and five years, plastic from the United Kingdom ends up in the uninhabited Arctic zones. Even the most remote places cannot get away from the increasing levels of pollution from plastic.

Plastic does not break down chemically, but it does in a physi­cal sense, under the influences of sunlight, oxygen, and wave action. To start with, there are the kind of plastic objects that everyone is familiar with. Then you get the larger, easily visible pieces, which are broken down in turn into even smaller fragments. And those become microplastics, sometimes invisible to the naked eye. The process can then continue further, with the microplastics becoming nanoplastics. This fragmentation does not reduce the overall weight of plastic soup, it only affects its composition. The amount of microplastics and nanoplastics have risen exponentially in a rela­tively short time. It may mean that it is already better to speak of a plastic broth rather than a plastic soup.

About 3 percent of the plastic produced every year in the world ends up in the sea. Worldwide production in 2014 was 311 million tons. Taking into account the way that large pieces are broken up, a group of scientists calculated that the total number of micro· plastic particles on the surface of the oceans in that year was some­where between 15 and 51 trillion. Altogether, these microplastics would weigh somewhere between 93,000 and 236,000 tons. That is, however, only a tiny fraction of the roughly ten million tons that were reckoned to have ended up in the sea in 2010 alone. Their con­clusion was that there is, in fact, a lot less plastic to be found than might be expected. As of the time of writing, nobody has really been able to explain this mystery pro­perly. 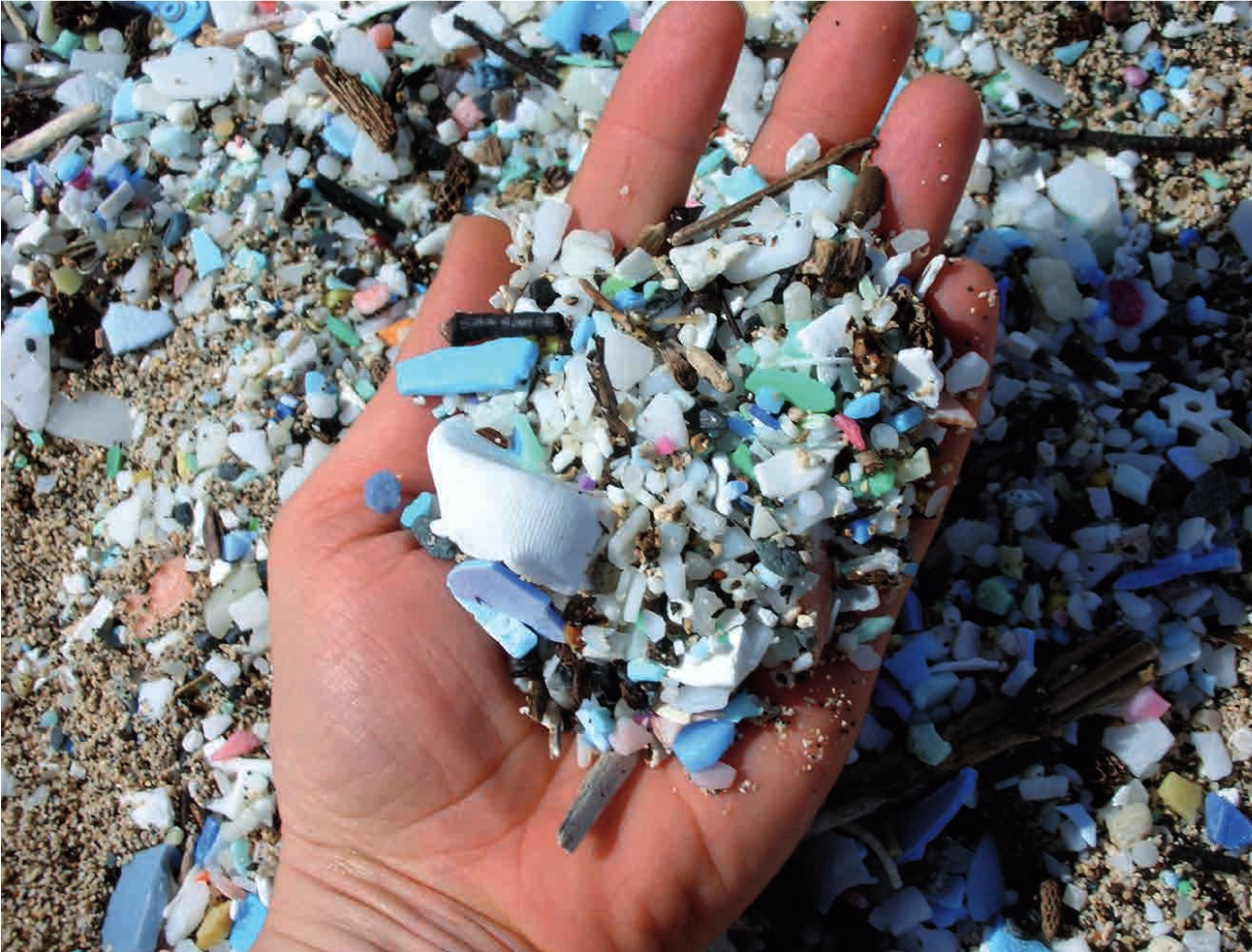 A great deal of knowledge has been acquired about plastic soup by analyzing the contents of dragnets. Fine-meshed nets extract plastic particles from the surface waters that are larger than 0.3 mm. The number of pieces is counted. It is then possible to calculate how much is rotating around, for example per square kilometer. The method has its limita­tions. There may be a fraction that is already fragmented into pieces smaller than 0.3 mm that then slip through the mesh. Even less is known about the amounts of plastic that are floating lower in the water or lying on the seabed.

Researches are nevertheless getting more insights into the complex mechanisms that come into play regarding plastic soup. It is suspected that a lot of the floating plastic does sink over the course of time. Birds also transport the plastic, picking small pieces of plastic up out of the water and flying thousands of kilometers. In the meantime, that plastic gets ground down in their stomachs into little pieces that they can excrete. This is the case for the northern fulmar, for instance. In northwestern Europe, these birds have an average of 35 pieces of plastic in their bodies. There are about two million of them in the North Sea area, grinding up and dispersing no less than 630 million pieces each year, representing a total of six tons. A proportion of that will be deposited on land, far from the sea. So, these birds are making the seas a little cleaner while polluting the land. Marine animals that swallow the plastic can also help clear up the mystery'.

Nanoparticles can spread through the bodies of animals and even reach organs. For that reason, it is suspected that they are particularly harmful.

Calculations based on an analysis of the stomach contents of fish that live at depths of two hundred to a thousand meters suggest that they ingest between 12,000 and 2 - 4,000 tons of plastic a year. All those animals with plastics in their bodies together represent a colossal and invisible reservoir of plastic waste.

The process of continuous fragmentation means that the world is confronted with two insoluble problems. There is, after all, no possible way of getting all the fragments out of the water. Anyone attempting to extract the particles would also be catching living organisms, as the two are so closely intertwined. Even if it were technically possible, the costs would be exorbitantly high. And then there is the second problem: the smaller the particles, the greater the chance that animal species will swallow them. Nanoparticles can spread through the bodies of animals and even reach organs. For that reason, it is suspected that they are particularly harmful. The fragmentation process often starts before the plastic has even reached the sea. A lot of what the rivers disgorge is already no longer whole or recognizable.

Researchers agree that the key source of microplastics is the ongoing fragmentation and that larger pieces such as bottles and plastic packaging gradually break down into smaller and smaller pieces as a result of exposure to ultraviolet radiation, oxygen, and friction. Fragmentation will proceed most quickly on rocky coastlines, where there are big waves and a lot of sunlight. The plastic becomes brittle, breaks, and is pulverized. On the other hand, plastic that is suspended in the water or that has, for instance, been encapsulated in ice will degrade little, if at all.

Animals contribute to fragmentation as well: gammarids can shred a single plastic bag into 1.75 million pieces. The fragmentation process is skipped in cases where micro plastics contribute directly to plastic soup, and that happens on a large scale. Microplastics are sometimes produced to be used in that form, as particulates that are added to care products. They are then rinsed and carried away in the wastewater, with a proportion inevitably ending up in the sea. In other cases, it is about wear and tear. Synthetic material in the rubber of car tires, for example, gets into the air, road shoulders, and groundwater as fine particulates. Plastic clothing wears away while being washed and dried in machines. A substantial proportion of these microfibers end up in the open water via the sewers. 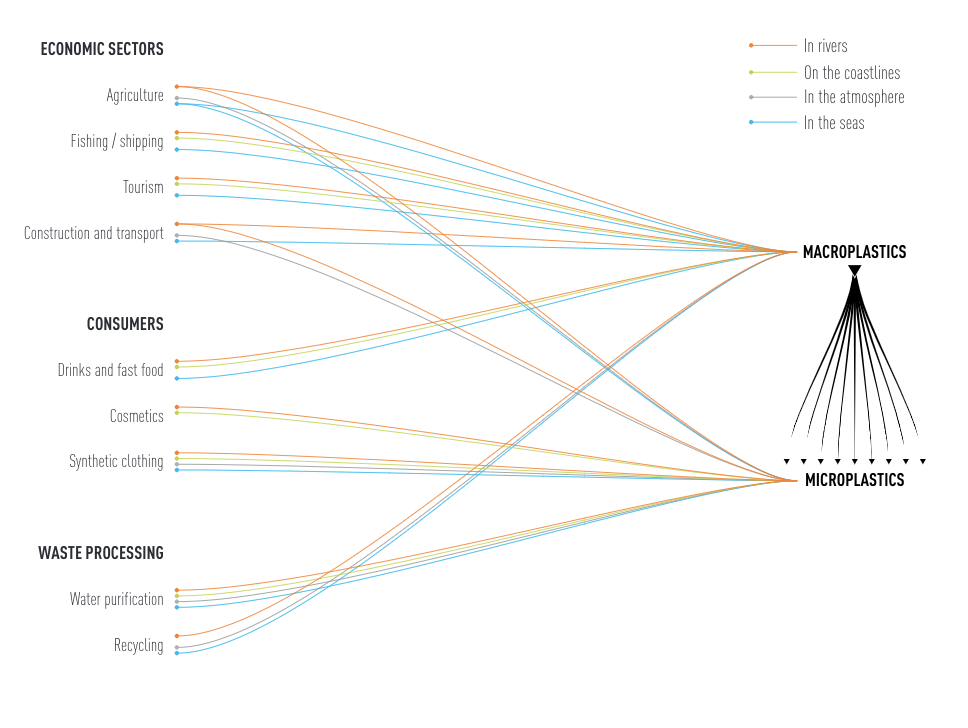 See all by Michiel Roscam Abbing