How much do companies really care about COP21?

Ikea, Volkswagen, HP and Philip Morris are among those making big pre-Paris climate commitments. But how they will follow through, and will other CEOs buy in?

Expectations may be high among government officials, NGOs and activists gearing up for the United Nations climate talks in Paris this December, but most corporate CEOs don’t expect much.

That's the takeaway from the latest in a string of somewhat contradictory reports on the role of business in the U.N.'s COP21 negotiations.

While CDP advises that more companies than ever — 158 and counting — are committing to concrete action to assist an international accord on a path to mitigate climate change, the picture emerging from PricewaterhouseCoopers' new "CEO Pulse on Climate Change" survey is one of general skepticism that the U.N. talks will propel action.

"The COP21 summit in Paris will generate headlines from now until early December," the PwC report stated. "But CEOs tell us the potential for a binding agreement isn’t the main driver for climate change action in their sector."

Consumer preference for sustainable products is by far the biggest driver of companies taking action on climate change, with 80 percent of the CEOs citing it as the main factor. The second biggest motivating factor would be a "clear, consistent and long-term national government policy framework" from their home governments.

Less than half cited the prospect of a U.N. accord as a major factor in setting corporate climate targets.

Many CEOs are motivated by sheer business opportunity — or the potential loss of business if they didn't respond to consumers' concern about the climate.

When asked what actions they’d taken in response to climate change risks, 75 percent of the CEOs polled by PwC said their companies had developed more sustainable products and services. More than half were making "strategic investments" in green growth opportunities.

Still, 61 percent also cited risk to their business operations posed by extreme weather events as spurring them to action. CEOs from companies dependent on supply chains in far-flung places were most attuned to this risk. The least concerned about risks to operations were financial services firms.

"When it comes to industry sectors, a higher proportion of financial services CEOs don’t see climate change as a risk to their business models compared to other sectors, which could highlight a disconnect with the sectors they finance," PwC said.

The wide-ranging findings — that companies are on board with climate action, but that they don't have much faith in the U.N. process — underscore entrenched challenges and divisions within the world of corporate sustainability, which are becoming more publicly visible in the run up to COP21.

For one, as activists push for more stringent climate goals and increased accountability, a stark divide is arising between European businesses and those operating elsewhere, particularly the United States. 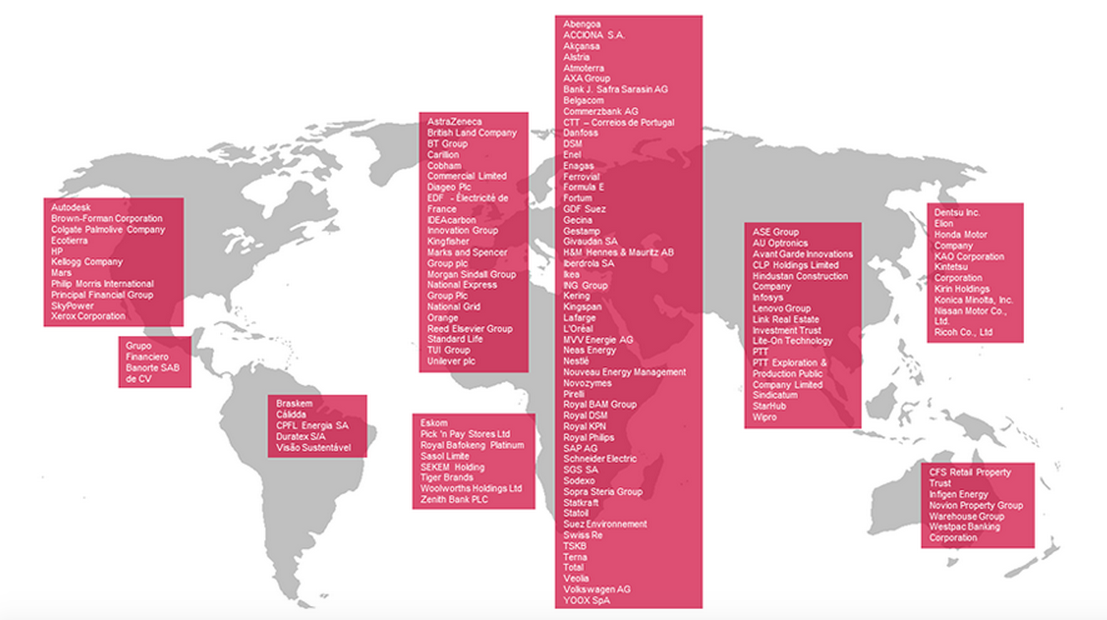 European firms already are subject to more regulation than their counterparts in the U.S., Asia and Africa. And as the United States nears a national election, the prospects for an abrupt change on climate policy mirrors the fickleness of political winds.

Another wild card is how companies that profit from fossil fuels, namely oil and gas incumbents, are positioning themselves in discussions about the transition to a low-carbon economy.

Sure, companies may have been disillusioned by previous hype cycles — and subsequent inaction — at U.N. climate gatherings, namely in Copenhagen.

But don't automatically assign CEO skepticism about COP21 to outright opposition to climate action. Three-quarters of CEOs surveyed by PwC say they want their national governments to form clear policies around climate change.

If national governments set unambiguous, long-term regulation and raised awareness among consumers, "business will follow with lower carbon, more climate resilient products, services and solutions, and some of the finance," PwC said.

The art of corporate commitments

Over the last year, advocacy groups have stepped up calls for companies to make formal climate commitments ahead of COP21. One complicating factor is that companies already set sustainability goals all the time.

Corporate climate commitments often come as part of slick annual sustainability reports, or, in the event of something more out of the ordinary, a sustainability-centric press release.

Businesses are motivated in these pursuits by all kinds of internal and external pressures. Drivers can include looming regulatory changes, exposure to financial and operational risks, or the branding and talent attraction benefits that can come with being seen as green.

The problem always has been that individual climate commitments are non-binding — and the way they get set in the first place can be all over the map.

For example, setting goals based on what's actually occurring with the climate may seem like a forgone conclusion. But "science-based goals" are just now gaining real traction among NGOs and advocates.

Even if goals are set in line with current climate science, the next question becomes who is responsible for enforcing them. The United Nations certainly doesn't occupy that role, and the absence of uniform national policy makes government intervention highly unlikely.

As a result, self-policing by companies, their competitors and NGOs — groups with all sorts of complicating business ties — has become the de facto method of evaluating performance against sustainability goals.

What COP21 has provided is a rallying point for third-party groups to define key levers for corporate climate action, hopefully cutting through some of the noise in the crowded landscape of environmental goal setting.

The duo of the Carbon Disclosure Project and the coalition We Mean Business have been out in front collecting corporate commitments in several categories:

A range of industries are represented on the running lists of companies that have signed on.

While commitments such as procuring 100 percent renewable energy are nothing to scoff at, the process of securing new COP commitments does raise familiar questions — namely, how these goals will be accomplished, and what happens if they aren't.

Take the commitment to put a price on carbon as an example.

The lists of committed companies compiled by CDP and We Mean Business aggregate businesses that have signed onto existing carbon pricing frameworks, such as the U.N. Global Compact’s Business Leadership Criteria or the World Bank’s Statement on Putting a Price on Carbon.

The U.N. framework outlines fairly specific criteria for signatories: Set a price "high enough to materially affect investment decisions"; publicly advocate for "the importance of carbon pricing through policy mechanisms"; and then publicly report progress on those efforts.

Still, no time frame for completion is included in the language, and there is also no stipulation about how a price should be determined.

Questions to answer before COP

In addition to the veracity of corporate climate commitments, trends among companies that have signed on to date raise other issues to consider before U.N. delegates descend on Paris in December.

First is the lack of geographic diversity among companies making commitments for what has been billed as a key moment for global solidarity on climate action.

More than 60 of the companies are European, with 11 from the U.S., seven from South America, nine from Japan and about 15 from the rest of Asia, as of a CDP report in mid-summer.

One explanation could be that several American companies that don't appear on the list, including tech titans Google and Amazon, already have set independent 100 percent renewable energy goals. Microsoft is an example of a company absent from the COP commitments list that already has implemented (and discussed) its carbon pricing strategy.

Another potential reason for the concentration of companies across the Atlantic is proximity to the proceedings in Paris and the European Union’s stricter regulatory climate.

For more than a decade, the EU has operated a large cap-and-trade system. Critics still contend (PDF), however, that the system’s “excess emissions allowances” have “resulted in a carbon price that is too low to promote low-carbon solutions.”

Aside from the European domination of COP commitments, another curious development on the road to Paris has been the role of oil companies.

Although it seems financially suicidal for fossil fuel incumbents to lobby for a carbon tax, a group of (mostly European) oil companies formally has written the U.N. asking for “certainty” on the issue.

Some have questioned the underlying intent of oil companies already combating falling prices. Others say that oil companies would be wise to engage on climate issues now for the potential to reap the benefits of nascent markets such as carbon capture and sequestration later.

As the Guardian has reported, back channel lobbying ahead of COP21 is also already in full force — but not necessarily in the way that climate advocates might have hoped. Many large businesses, about 77 percent according to a CDP survey, are engaging in climate policy through third party business groups, some of which actively undermine new emissions restrictions.

“The key is now for business to find its voice,” Steve Howard, chief sustainability officer for Ikea, said in 2013. “We cannot defend the status quo and at the same time build a sustainable future at pace and scale.”

Stay tuned to COP21 coverage on GreenBiz for more on which companies are committing to new climate measures — and what it all means for business.