How much will it cost to turn the tide of the urban water crisis?

"The city of Atlanta has a $3 billion to $4 billion capital program around water and sewer," Reed recently explained at the GreenBiz VERGE 2014 conference in San Francisco. "We had terrible water wars in Atlanta between Georgia, Alabama and Florida."

Though the city still has nine figures worth of debt tied to water bonds, Reed has overseen a push to invest $270 million in a new reservoir and cut consumption by 20 percent — moves that could be good for future generations in need of clean water but that also run up against more immediate financial disincentives.

"That actually hurts us, although it's the right decision long term," Reed said. "We are the folks that sell water. When we reduce water usage, it hurts us in terms of our capacity to pay back bonds."

Beyond individual illustrations of the volatility now seizing urban water politics, a new in-depth report by The Nature Conservancy underscores the much broader global implications of rapid population growth in cities paired with unprecedented threats to  their water supplies. Add to that mounting pressure on cities to take action on other environmental woes, like ill effects of climate change, and it becomes an even taller order for budget-constrained local governments.

The Nature Conservancy found that 1 in 3 of world's 100 largest cities — which are cumulatively home to some 700 million people —  are currently "water stressed." That means water use by all sectors exceeds 40 percent of total availability from watersheds.

"Cities face twin challenges: water that is both scarce and polluted," the report authors state. "Rising demand has been allowed to grow unchecked, competing users upstream do not talk to or trust one another, increasingly unpredictable rainfall patterns have been altered by climate change, and the watersheds where our water comes from have been degraded."

One central tension illuminated by The Nature Conservancy report is a history of short-sightedness when it comes to where our water is coming from.

Watersheds already in use are increasingly jeopardized by pollution, and new potential water supply options to meet increasing demand don't look much better.

Significant deforestation has already impacted an estimated 40 percent of the hundreds of urban watersheds analyzed in the report, despite warnings from some in the water industry about resulting increases in pollutants since as far back as the 1980s.

"I was surprised seeing the trend over time," said Robert McDonald, lead study author and The Nature Conservancy's senior scientist for urban sustainability.

Add to that an anticipated 10 percent increase in the utilization of agricultural lands as a source for urban water by the year 2030. The use fertilizer is projected to grow 58 percent during the same period, raising serious questions about the safety of water originating in those areas. 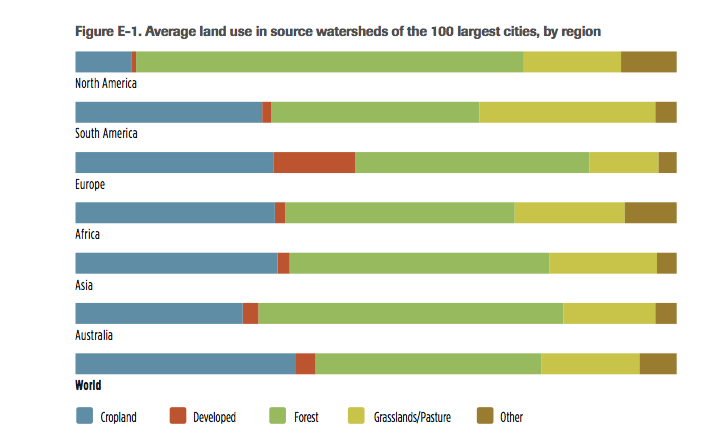 When it comes to how cities have attempted to deal with those dynamics, McDonald and his co-authors found a stark economic divide.

"Wealthy cities have the option of importing water, while lower-income cities mostly have to rely on water resources found nearby," the report states. "Cities that can afford to will be tempted to direct future investments toward moving more water ever greater distances to meet demand, but this is not a sustainable long-term solution."

Already the report notes that roughly 43 percent of water supplied to the world's 100 largest cities comes from such "inter-basin transfer," or moving water to different locations. That pencils out to 3.2 million cubic meters of water covering a distance of 5,700 kilometers every day in artificial channels.

The challenge now: Sketching out executable, scalable strategies to address the root environmental problems - and, perhaps more to the point, figuring out ways to pay for them.

The economics of urban water

The new TNC report crystallizes five core strategies to bolster the world's "natural infrastructure" for water with the core goal of reducing the amount of sediment and nutrients found in urban water supplies: 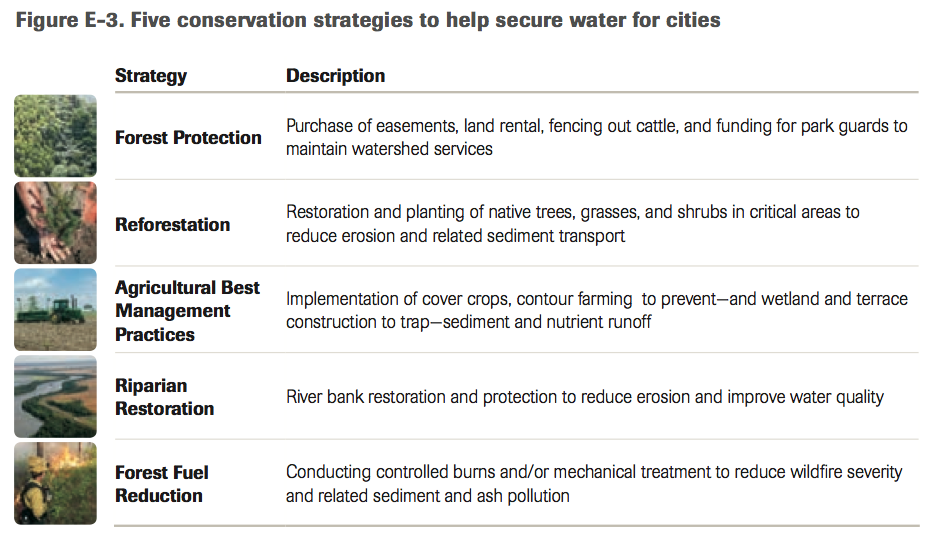 While the approaches themselves are nuanced, the underlying economic logic is pretty straightforward.

Still, McDonald notes that one of the more encouraging factors is how investment can be leveraged in cities with smaller watersheds. For one out of every four cities analyzed — many of them places like Sringar, India, with its fairly large 1 million-resident population and fairly small 1,120-hectacre watershed - the net return on investment would actually be positive.

But then there are places like Bangkok, Thailand, with its massive 14.4 million-hectacre watershed, where treating a huge geographic area becomes much less cost effective. The chart below on conservation costs per hectacre help illuminate why the size of a city's key water sources remains such a daunting economic barrier: 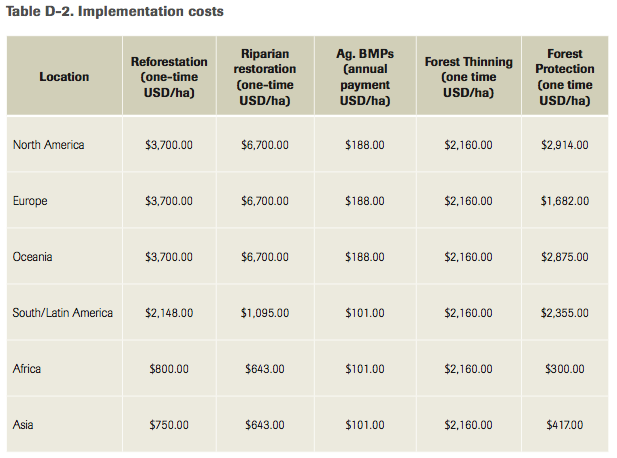 For cities that do draw on large watersheds, the report advocates for increased pooling of resources between localities to better distribute costs. The Nature Conservancy itself has experimented with collective water funds in portions of South America over the last decade, McDonald noted.

And there are companies of all sizes angling to get in on the emerging global market for clean water, from Coca Cola to socially-oriented startup.

In the meantime, there are also long-term economic and environmental pressures to keep in mind.

In the wake of the global financial crisis, analysts have been sounding alarms about risk associated with water stress undercutting the stability of the multitrillion-dollar U.S. bond market. Detrimental effects of climate change on urban water supply and increased demand for water are two other huge variables.

"This particular report is just about the now," McDonald said. "All of the challenges outlined in the report get harder both because of climate change... [and] also just the dramatic growth of cities."