From Jules Verne's novels to Gene Roddenberry's "Star Trek," science fiction has helped accelerate humanity’s drive forward. Many technologies we take for granted today — tablets, video conferencing and even lunar modules, to name a few — once only existed in the imaginations of prescient writers.

But science fiction also is important because it allows us to depict how society could function differently. It is the first step toward progress, allowing us to picture the future we want, and ponder ways to work toward it. Likewise, it also makes us aware of futures we’d rather avoid — think "1984" or "Elysium" — and how we might prevent them.

At its core, science fiction simply reflects present society’s hopes and anxieties. And this sentiment is shared by those engaged in sustainable business. We recognize that business-as-usual could lead to a dystopian future marked by extreme social inequality, climate change impacts and even the world’s sixth mass extinction event.

Climate change is so dire we need a new kind of science fiction to make sense of it, futures writer Claire Evans recently wrote in The Guardian:

The stories we tell ourselves can help us understand, and maybe even adapt, to this new world. But the dour dystopias and escapist fantasies of our current science fiction diet just won’t do. We need something new: a form of science fiction that tackles the radical changes of our pressing and strange reality. We need an Anthropocene fiction. 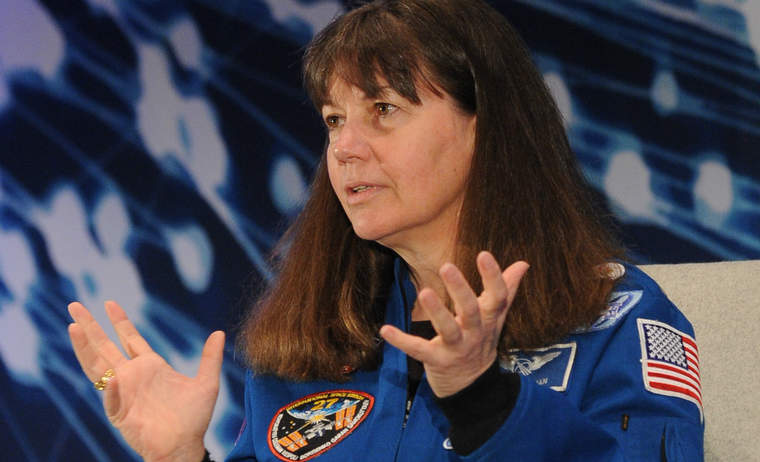 Damon stars in "The Martian," which came up several times at the GreenBiz VERGE event in San Jose, California, drawing the link between space travel and sustainability on Earth. In the film, Damon’s character is left behind after a mission to Mars and must innovate with limited supplies.

"People went to go see the movie, and they thought, 'Wow, living on Mars might be something we could really do,'" said NASA astronaut Cady Coleman during a discussion on sustainable space exploration. "And it brought them into that world, and it’s a world that we at NASA live in every single day: looking at systems to help us get to Mars."

We’re doing things up there that can’t be done down here but have a lot to do with life on Earth.

Like Damon’s character, we on Earth must make do with limited resources to not just survive, but thrive. But unlike his fictional astronaut, we can’t count on holding out for a rescue mission — we’ve got to learn to make the most of what we’ve got.

Some say that given the the multitude of problems on earth, we should focus on saving this planet rather than exploring space. Others argue that because we’re already doomed, space travel is the only way to ensure humanity’s long-term survival.

But these aren’t mutually exclusive aims, according to the conversations at VERGE. Instead, figuring out the same systems that will allow us to travel to and settle on Mars also will help to tackle some of Earth’s most dire sustainability challenges.

"We’re doing things up there that can’t be done down here but have a lot to do with life on Earth," Coleman said.

Water is what makes life on Earth — or anywhere — possible, but we continue to treat it as if it were an infinite resource. Although increasing water scarcity is starting to shift attitudes toward such water-saving technologies as water recycling, NASA has been at it for years.

Space stations and shuttles must use water hauled up from the planet’s surface, which means astronauts must make good use of every single drop for drinking, bathing and all other uses.

Today, NASA can recycle up to 85 percent of the water its astronauts consume, according to the agency’s Jason Crusan, and this is expected to hit 90 to 95 percent by the time we’re ready to venture to Mars. (To show how recycled wastewater can taste and look fresh, Santa Clara Valley water reps were passing out samples at VERGE.)

Although space stations in orbit can be resupplied with water and other critical resources, the farther we travel, the more closed-loop our systems will need to be. Based on current propulsion technology, it would take around six months for astronauts to travel to Mars and, once there, they would need to continue to make do with what they brought with them.

NASA now knows for sure that there’s water on Mars, Crusan said, but its salt content is 1,000 times that of levels adequate for human consumption. In order to take advantage of the red planet’s water resources, the agency must develop nothing less than epic desalination technologies — which also could apply to Earth.

Astronauting can make one work up quite an appetite and, with no Whole Foods scheduled to open in orbit anytime soon, NASA is looking to grow grub in space.

In late 2016, the agency’s Advanced Plant Habitat will attempt to grow vegetables in space, and learn of long-duration microgravity exposure to plants in space. They hope to grow wheat and rice for nutrition, as well as potatoes, legumes and leafy vegetables such as lettuce.

“It’s using a lot of what we learned over the years to build closed-loop systems to make a plant chamber that’s able to control the temperature, control the humidity, control the carbon dioxide and also the lighting,” Crusan said. "If you’re a farmer and you’re growing a crop, you can’t control a lot that lighting or weather. Think of this as a way to study science in a very controlled environment and get the optimum levels."

NASA already succeeded in growing lettuce on the International Space Station using the Veggie system, a precursor to APH developed by a firm called Orbital Technologies. Astronauts made history when they enjoyed the first "space salad."

That’s one small bite for a man, one giant leaf for mankind.

NASA wants to work with business

Space exploration has created new markets and technologies that have spurred our economy and changed our lives in more ways than we might realize. Artificial limbs, anti-icing systems on vehicles, fire-resistant materials and freeze-drying all originated from NASA research. Solar power, water purification and real-time weather visualization and forecasting also trace their roots to the space agency.

NASA even has a technology transfer program, which offers a wealth of open-source data for entrepreneurs to avail themselves of. The agency also offers thousands of patents for all manner of technologies it has developed with U.S. taxpayer money.

Interestingly, around half of the experiments done on the International Space Station are actually funded by the private sector — pharmaceutical companies, for example, pay NASA to research new medicines.

Although not supported by NASA, one of the most science fiction-sounding things to happen in recent years was Tesla CEO Elon Musk’s 2013 call for the creation of a "Hyperloop" — a conceptual high-speed system that rockets passengers in capsules through tubes riding on air cushions fast enough to travel from Los Angeles to San Francisco in a half hour.

The Hyperloop is going to do for the 21st century what the railroad did for the 19th.

The company is taking an alternative approach to making the Hyperloop a reality. Rather than directly hiring a massive staff of engineers and other support, it is tapping into the collective knowledge of more than 420 people from NASA, Boeing, Airbus and SpaceX — who are volunteering to help the project in their spare time. Global engineering firm AECOM and vacuum company Oerlikon also have signed on, enhancing the project’s credibility.

Tube travel might sound like something out of "Doctor Who," but we already have the technical ability to built it.

"It’s a massive project that goes way beyond the technology part of making it," Dirk Ahlborn, CEO of Hyperloop Transportation Technologies, a leading firm responding to Musk’s call, said at VERGE. "The technology part is fairly simple."

The real challenge might be regulatory. Technology may change fast, but bureaucrats don’t, which could complicate the commercialization of the Hyperloop in the United States. That’s why, when the company begins construction on the Hyperloop sometime next year, it will be on private property.

But Ahlborn thinks the first commercial Hyperloop won’t be built Stateside, but in the developing regions of the global South. Cities such as Beijing and Bombay have legendary transportation problems, and the Hyperloop could help address them. If powered by renewable energy, the Hyperloop could provide a form of fast and efficient sustainable travel.

"The Hyperloop is going to do for the 21st century what the railroad did for the 19th," Ahlborn said.

NASA's Cady Coleman on the necessity of circular economy thinking

Astronaut Cady Coleman on sustainability missions and beyond