Across the United States, the utilities that provide natural gas to homes and businesses have rapidly increased total spending, tripling from roughly $5 billion per year to $15 billion between 2009 and 2017, according to data from the American Gas Association.

Many factors have contributed to this increase, including investments in automation and improved inspection capabilities. The rate at which old pipes are replaced with new pipes also has increased, continuing investment in new assets expected to be in service well beyond the timeframe of mid-century greenhouse gas commitments which may require their retirement. 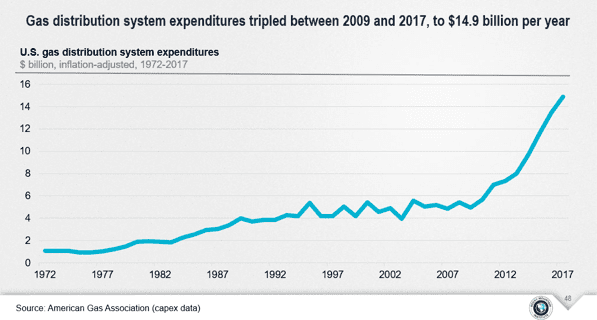 Despite these increases in spending, America’s gas infrastructure is getting older. As RMI’s new analysis, "The Impact of Burning Fossil Fuels in Buildings," shows, in 2004, the average gas main (the gas pipes running under city streets) in service was 28.1 years old. By 2018, that had increased to 33.8 years old. A quarter of active gas mains are more than 50 years old. One out of every four miles of gas mains in Massachusetts was installed before 1940. A Chicago pipe just retired this year had been in operation since 1859.

Age is just one factor gas utilities consider when planning gas main replacement projects — other factors such as pipe material can be more critical — but the increased spending on an aging system does call into question the wisdom of doubling down on a fossil fuel delivery network that’s becoming more expensive at the same time the need for climate action is becoming more urgent. 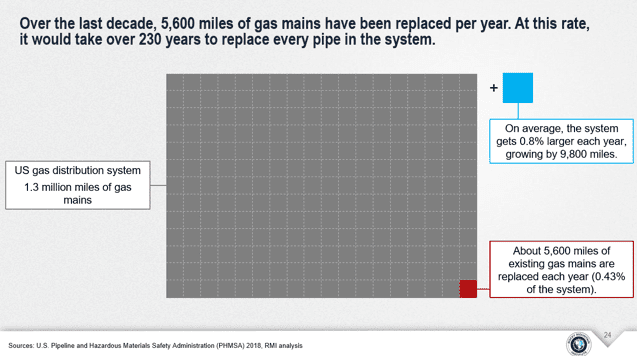 While it may be tempting to throw more money at this problem, we quite simply can’t spend our way out of this one. In places such as Massachusetts, with a disproportionately high share of the nation’s older and leak-prone pipe, public policy already supports "accelerated" pipe replacement, but utility programs will take decades longer and cost billions of dollars. With the American Gas Association reporting that annual spending on the gas distribution system already has increased from around $5 billion to $15 billion over 10 years, further acceleration of pipe replacement would be extremely expensive and likely insufficient.

Abundant supply has kept gas prices low, but that disguises the long-term costs that continue to accrue from increasingly expensive gas infrastructure. And because gas utility customers are typically on the hook for infrastructure investments, these customers will bear the costs — either of continued increase in long term pipe replacement needs or of attempts to accelerate massive new investment programs.

This process is already playing out in Illinois. The state recently approved Peoples Gas’ massive infrastructure replacement plan, which entails replacing all gas pipes that run under Chicago. By the time the work is finished in 2040, hundreds of thousands of customers could be paying $750 a year for the replacement effort, a report found. Peoples Gas says the entire project could end up costing between $8 billion and $11 billion. This total cost will be between $11,000 and $16,000 per customer served by Peoples Gas.

Not only are main replacement and other gas system investments a significant financial burden that will take decades to complete, but doubling down on fossil fuel infrastructure is also entirely incompatible with climate change goals. Several states with the oldest gas infrastructure also have ambitious emissions reduction targets, meaning they need to be working swiftly to reduce fossil fuel use and the associated emissions. 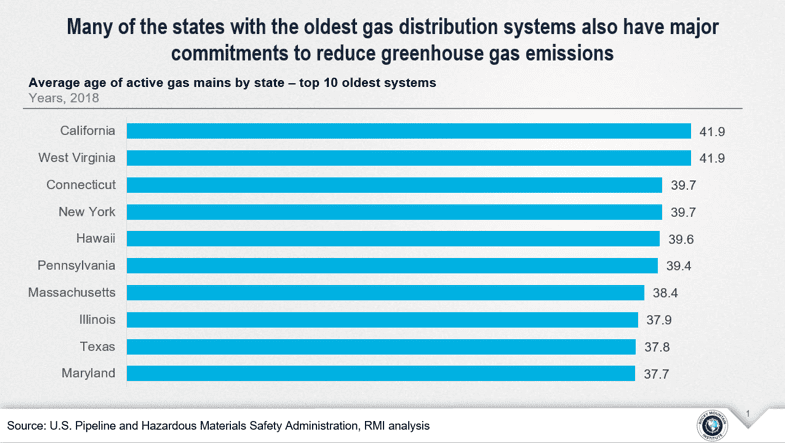 Instead of continuing to invest in pipe replacement and other gas assets, we can set a path toward retiring them altogether. This starts with moving away from burning gas in homes and buildings and transitioning to efficient electric heating, water heating and cooking. Relying on appliances such as heat pumps eliminates the direct greenhouse gas emissions associated with burning gas, and retiring old pipes eliminates methane emissions associated with leaks. Heat pumps also add a new level of comfort, dynamically adjusting heating output in ways gas appliances cannot.

The first step on this path away from fossil fuels in buildings is to stop making the problem worse: Stop constructing new homes and buildings connected to gas. PG&E in California became the first U.S. gas and electric utility to endorse this perspective earlier this year. PG&E has provided letters of support to 22 cities in Northern California which are considering local building codes that require or preference all-electric new construction starting in 2020. Not only is this critical to meeting climate change targets, it’s also the most cost-effective approach. Previous RMI research found that building new, all-electric homes in four U.S. cities (Houston, Oakland, Providence and Chicago) is cheaper than building with gas. Analysis from E3 (PDF) reinforced this conclusion across California, finding that "all-electric new construction is expected to be lower cost than gas-fueled homes that have air conditioning" and that most retrofit scenarios also offer savings. A key reason for these savings is avoiding the cost of building new gas lines to and inside buildings.

As for the vast network of gas assets serving existing buildings, there will be opportunities to pursue electrification as an alternative to expensive replacement or other planned projects. In some cases, when all customers served by an existing gas asset can switch to electric alternatives to their gas service, the asset can be retired instead of replaced. Locations where significant gas system investments are to be made represent a good starting point for utilities, policymakers and other stakeholders to target building electrification efforts. Any major gas investment could offer an opportunity to avoid unnecessary spending, and an electrification pathway can be more cost-effective, depending on local system and building factors. In most cases today, gas utilities have an obligation to serve any customer who is able to pay for service, meaning that utilities would have to pursue a voluntary, consensus agreement with all customers in order to retire a shared gas asset. To enable targeted gas retirements at scale, policy and regulatory reform must enable a more straightforward pathway to avoid unnecessary gas expenditures when electrification alternatives are available.

The first step on this path away from fossil fuels in buildings is to stop making the problem worse: Stop constructing new homes and buildings connected to gas.

This work is beginning to happen. In California, PG&E’s gas system costs have risen as a result of increased investments in safety, reliability, leak detection and other efforts to reduce risk and enhance performance over the last decade. As PG&E seeks to balance the need for these investments with the importance of customer affordability, the company has pursued electrification alternatives where doing so was feasible and cost-effective. The most successful efforts have occurred where a small number of customers agreed to convert appliances to electricity, resulting in significant cost savings on gas asset expenditures. However, these efforts are not always successful. The economics of fully funding customer electrification with utility funds have not always proved cost-effective, particularly when multiple buildings are served by an asset and the cost of converting all of them exceeds the planned investment. Still, over the past few years, PG&E has avoided several million dollars in gas system expenditures that otherwise would have to be recovered through gas rates.

For this to work at scale, utilities can’t do it on their own. Significant new regulatory and policy changes will be needed, including creating new flexibility in the way utilities account for operational and capital expenditure and establishing new standards for how to fairly compare and allocate the costs of switching off gas versus those to reinvest in the gas network. Retiring existing gas infrastructure requires current gas customers to forgo gas completely; policy and regulatory approaches will be needed to address situations in which electrification offers the most cost-effective pathway and address the risk that individual customer demands for gas could impose excessive system costs compared to alternatives. Additionally, gas-only versus combined gas and electric utilities may need different incentive structures to encourage them to explore alternatives to major gas system investments.

Addressing the vast U.S. network of aging gas pipes is a daunting prospect, but it also represents a critical opportunity to chart a new course, one that taps into the ever-cheaper supplies of clean energy and eliminates the harmful emissions produced by fossil fuels in buildings — all without sinking billions of dollars into new infrastructure we don’t need.

6 myths about the end of the IT lifecycle