The Gulf city has become the poster child for building to withstand extreme weather, climate change and social or economic shocks — but there's a long way to go.

Our GreenBiz Evergreen column brings to light GreenBiz stories from the past that remain relevant today. In light of Hurricane Harvey's devastation to Houston this week, we resurface this August 2015 tale of resilience efforts in New Orleans. Hurricane Katrina was 12 years ago this week. Also worth a second look: 4 crucial lessons from flood damage in America

On Tuesday, just shy of 10 years to the day after Hurricane Katrina hit New Orleans and unleashed a chain of events that would kill 1,800 people and cause an estimated $135 billion worth of damage, the Gulf city released a first-of-its-kind resilience plan intended to avert a repeat of history.

Undertaken in coordination with Rockefeller Foundation offshoot 100 Resilient Cities, the new Resilient New Orleans plan melds economic development and environmental sustainability with what is billed as a way to shift from reactive to proactive disaster response.

“After the last decade of Katrina, Rita, Ike, Gustav, Isaac, the BP oil spill and the Great Recession, it is safe to say that New Orleans has faced the biggest challenges any American city has ever faced,” Mayor Mitchell Landrieu wrote in a foreword to the new resilience strategy. “We not only came back, but we are rebuilding New Orleans better and stronger than before.”

While New Orleans has a volatile history of handling what 100 Resilient Cities diplomatically calls “unique experience with major urban emergencies,” this track record also has propelled the city to the forefront of a dual public and private sector rush to build for resilience — mitigating fallout not only from increasingly likely extreme storms or climate change impacts, such as sea-level rise, but also underlying stressors, like income inequality and violent crime.

That effort is gaining traction among public officials, NGOs and businesses in big cities such as Los Angeles and New York. And it's all happening at a time when the budget-constrained federal government and a lack of international climate action are throwing cities, with their own varied financial pictures, into the spotlight to react.

In the process, big questions are arising, each tailored to local social, political and economic dynamics. Where should development be concentrated in the first place? Who pays for costly infrastructure upgrades? And who ultimately will benefit from the fruits of all the flashy planning efforts?

So far, that includes a new $14.5 billion structural coastal flood protection system, along with the plan released this week calling for an overhaul of local transportation systems, the introduction of “green infrastructure” and putting to use one-time disaster funding (including BP's multibillion-dollar oil spill settlement).

But moving forward will entail bridging entrenched gulfs in the experiences of people on the ground in the city — particularly when it comes to stark racial and class divides — amid renewed outside interest.

For instance, New Orleans has seen a jump in venture capital funding from $16 per capita in 2010 to $32 per capita in 2014, mirroring national trends showing an improved investment climate. Dozens of organizations, ranging from local nonprofits to hulking corporations such as Walmart and McDonald's, have contributed in some way to the busy “Katrina10” slate of anniversary events. 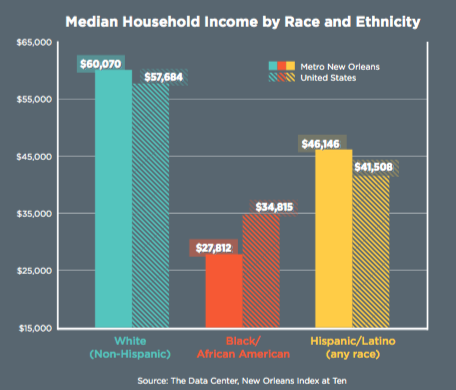 Drilling deeper down into local economic data, however, still reveals deep discord as to whether the city has made good on vows to improve conditions for all residents.

Beyond well-documented struggles with education and a spike in violent crime this year, census data shows that the number of black middle class households in the city, or those bringing in $35,000-$100,000 per year, dropped by nine percentage points from 2005 to 2013. The share of black households earning more than $100,000 also has dropped nine points since the storm, according to an analysis by FiveThirtyEight.

“Nearly four out of five white residents believe the city has mostly recovered, while nearly three out of five blacks say it has not,” the New York Times recently reported, “a division sustained over a variety of issues including the local economy, the state of schools and the quality of life.”

Still, the city's advocates contend, if New Orleans can put the social, economic and environmental pieces together to implement its lofty new resilience plan, any city can.

“The truth of the matter is our educational attainment is much lower than most other places. Our health is lower,” Landrieu said in a recent video (below) produced by 100 Resilient Cities. “What a strange place for the people to be showing the country that it can really work.”

Resilience from the ground up

The 10th anniversary of Hurricane Katrina is being marked by the city with a week of high profile events, a 10,000-person volunteer drive and even “resilience tours” by sea plane. All of the fanfare was punctuated by the city releasing the new 90-page Resilient New Orleans plan.

The optimistic approach to the anniversary of Katrina is no doubt intentional, given how visible the city's failings were in the aftermath of the storm — particularly when compounded by the costly shortcomings of federal agencies including FEMA.

Brooke Smith, director of strategic partnerships for the Mayor’s Office of New Orleans, recalled a “loss of trust” between government and civil society after Katrina. Such skepticism is still evident in other events taking place this week in New Orleans, such as the “People's History of Katrina Conference,” which will cover topics including “disaster capitalism,” police brutality and inadequate city services.

Perhaps it comes as little surprise, then, that the city's new planning documents emphasize pushing resilience beyond rhetoric (tag line: “strategic actions to shape our future city”), and addressing social iniquity in tandem with environmental issues and disaster preparedness.

“We must align our infrastructure and urban environment with the realities of our delta soils and geography,” the report reads. “Our adaptation must be both physical and behavioral. Rather than resist water, we must learn to embrace it.”

Embedded within those two short sentences are a range of potential approaches to resilience, from permeable multi-use green infrastructure to workforce development for poor residents who lack in-demand technology skills. 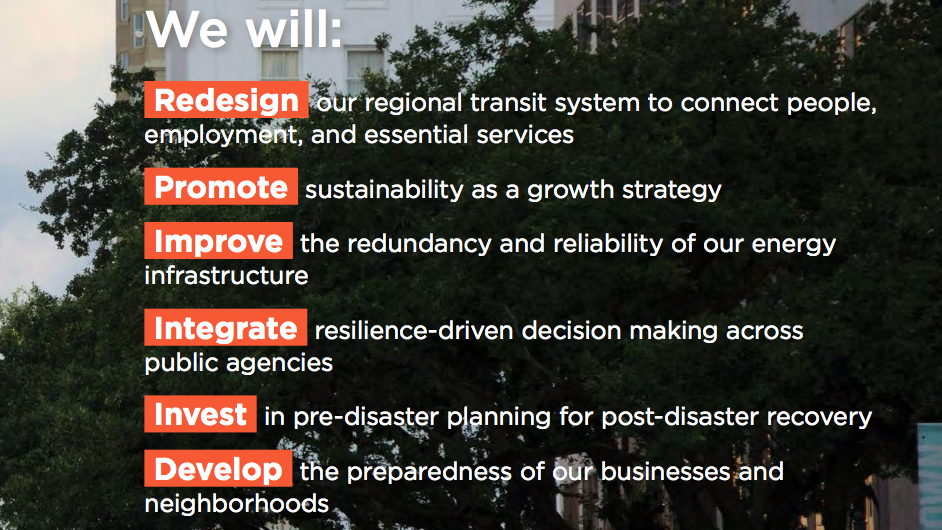 As devastating as Katrina was, hurricanes and floods are only two of the (big) environmental risks facing the city. Also at issue are “cumulative physical stresses,” such as land subsidence and the loss of coastal wetland buffers. Roughly 1,900 square miles of coastal land have been lost since 1932, and 1,800 more are expected to be lost without remediation by 2060.

Given that urban sprawl in New Orleans and elsewhere already has severely constricted the surface area where large amounts of rain or flood waters can be absorbed, the new resilience plan seeks to avoid sole reliance on hard infrastructure such as levees.

“Infrastructure that tries to keep the water out is destined to fail,” 100 Resilient Cities CEO Michael Berkowitz told GreenBiz. “This is not just New Orleans. It’s a problem that’s been exacerbated by the Corps. of Engineers.”

In addition to better environmental education, the city already has started experimenting with ways to increase the utility of under-used green space, turning vacant lots into rain gardens, adding green roofs to buildings and evaluating unconventional materials such as pervious pavement.

When it comes to policy, new rules require developers to include runoff mitigation plans in their applications to the city. A resilience retrofit financing program with Deutsche Bank-AllianceNRG is also in the works.

Recognizing that extreme storms are increasingly likely with accelerating climate change, New Orleans' plan includes a call to design and implement a targeted climate action plan with 2050 greenhouse gas emissions targets. Creating a resilience and sustainability department within the mayor's office will be another priority.

Noting that “Louisiana provides the U.S. with more oil and gas than we import from Saudi Arabia,” the plan also calls for beginning a transition away from heavy fossil fuel dependence. First steps will include launching a one-year energy efficiency challenge for downtown businesses, launching a microgrid pilot project and exploring renewable energy generation potential with utility Entergy.

Although enthusiasm about bringing technology into the resilience fold also abounds in city planning circles, from harnessing smart phones for communication sans landlines to slicing and dicing data on various risk factors, specifics on these topics are largely absent from the New Orleans plan.

However, the city is working with technical services firm iParametrics and insurer Swiss Re to develop a “pre-disaster plan for post-disaster recovery,” including efforts to identify what type of insurance — risk pooling? Green infrastructure modeling? — could apply to the city. Specific recovery plans for small businesses and individual neighborhoods are additional goals.

Given New Orleans' first-hand experience with several of the worst case scenarios confronting resilience planners, pulling off implementation of the new plan could be a major motivator for other locales mulling similar action.

At the core of these disparate issues is the notoriously mundane — yet exorbitantly expensive and critically important — issue of resilient infrastructure.

“In some ways, infrastructure can be great. It can take average cities or poor cities and really accelerate their growth and development,” Berkowitz said. “At the same time, history is littered with bad infrastructure.”

Robert Traver, director of the Villanova Center for the Advancement of Sustainability in Engineering, served on the external review board that oversaw the government analysis of what went wrong in New Orleans after Katrina. He now focuses on avoiding similar scenarios elsewhere.

“One of the things we learned out of New Orleans was everything was not treated as a system,” Traver told GreenBiz. “The pump systems were run by the system designed for a smaller storm; the levies were designed for a hurricane. They didn’t come together."

“Maybe this is not an area we want to rebuild,” Traver explained. "Of course, you have to do that before the flood hits.”

Instead of an all-or-nothing outlook, he points to localized zoning and redevelopment decisions. In New Orleans, it was decided not to rebuild a Six Flags amusement park. Traver asks whether one-story residential neighborhoods also might have been lofted to include a second level when rebuilt.

Part of the problem is policy related. The U.S. lacks a national flood policy, resulting in a mishmash of federal, state and local responsibilities, and antiquated government funding requirements often result in rebuilding outdated infrastructure instead of improving it.

Scrambling to fix infrastructure that was outmatched in the first place also doesn't come cheap. Some estimates peg disaster relief as up to 15 times more expensive than proactive risk mitigation.

“Prevention is a lot cheaper than repair or recovery,” Traver said. “We are pushing the bill down the road.”

And besides, for all the financial and political nuance, getting a handle on vulnerabilities early is what really can make or break a city's capacity to respond to duress.

“We have to now understand, 'What is our risk?'” Traver said. “New Jersey knows where the problems or liabilities are. So does New Orleans. But you go to the rest of the country …”