How next-gen geothermal could boost the future of energy

<p>By juicing geothermal with CO2, a team of scientists hope to overcome limitations to this potentially powerful form of renewable electricity.&nbsp;</p>

Harnessing naturally occurring heat trapped between layers of rock below the earth's surface, geothermal power plants are capable of supplying clean, renewable electricity around the clock. This valuable trait should position geothermal power as an important asset within emerging sustainable energy systems that rely heavily on intermittent renewables such as wind and solar.

But despite more than 50 years of commercial activity, geothermal power's path has been more rocky than disruptive.

That's largely because the medium- to high-temperature sites required by conventional geothermal power plants — known as hydrothermal sites — are limited. In the United States, which leads the world [PDF] in geothermal power with an installed operating generating capacity of about 3,790 megawatts as of the end of 2013, development is highly concentrated in the West, primarily California and Nevada. This adds up to just 0.33 percent of the country's electric generating fleet, according to the Federal Energy Regulatory Commission's (FERC) most recent infrastructure update [PDF]. Among electric fuel sources tracked by FERC, only waste heat and "other" account for less.

But there may be a solution to geothermal power's geographic limitation, which could open up the way for this subterranean resource to play a much greater role in energy systems of the future.

A novel approach to geothermal

Funded by National Science Foundation and Department of Energy grants, a team of scientists from Lawrence Livermore National Laboratory (LLNL), the University of Minnesota (U of M) and Ohio State University (OSU) has developed a novel geothermal power plant design that leverages unwanted, captured carbon dioxide to boost both output and efficiency compared to conventional geothermal plants. The approach also extends the potential reach of geothermal power generation across the country. 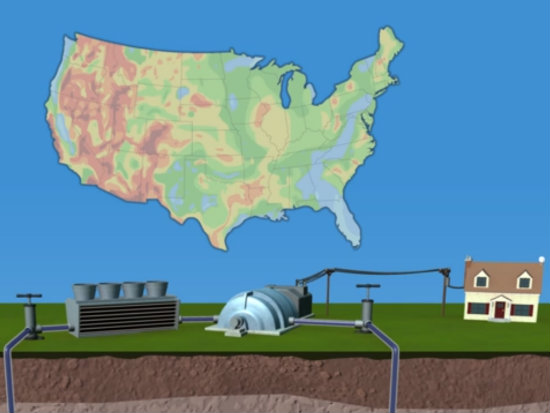 "There's an opportunity to deploy geothermal in many more places than possible with traditional plant designs," said Tom Buscheck, a geoscientist at LLNL, in an interview following his presentation of the concept at the American Geophysical Union's annual meeting in San Francisco last week. "We can harvest heat over much larger areas, in sedimentary formations with very permeable rock. I am hopeful. Geothermal has really been overlooked."

The research team believes it can enable geothermal power generation in most U.S. states west of the Mississippi River and even on the East Coast in states such as West Virginia. A spinoff of the University of Minnesota, Heat Mining Co. LLC, expects to begin construction on a pilot plant next year that could open the way to future commercial development in unconventional locations.

But, said Buscheck, the geothermal community needs to think out of the box.

In a traditional geothermal power plant, heat is harvested by tapping hot water deep under ground. That heat then turns a turbine to generate electricity. LLNL's "multi-fluid" design presented by Buscheck — which builds on the work of research collaborators Jeffrey Bielicki at OSU, Martin Saar at the U of M and others — is aimed at making geothermal power economically viable outside of geologic hot spots. It plans to do this by injecting carbon dioxide and nitrogen into concentric, horizontal wells, partly replacing water.

One advantage of adding CO2 is that it extracts heat more efficiently than water, noted OSU's Bielicki. The research team believes that its new design, depicted in the video below, can boost power generation at geothermal plants by at least 10 times.

"Our approach is far more efficient than conventional approaches," said Buscheck. Separating nitrogen from the air and adding it to the mix boosts power further and makes the approach more cost effective. "When I added nitrogen to the system, we discovered that we could drive more flow out and generate more power. We think we can cover the cost of capturing CO2 by adding nitrogen."

In addition to enabling geothermal power generation in places unsuited for conventional plants, Buscheck says LLNL's multi-fluid design can allow geothermal plants to store energy underground in the form of pressurized CO2 and nitrogen for days or even months. "This could be very useful in areas that have experienced a large expansion of wind and solar," he added.

One challenge, of course, is that such geothermal plants likely would need to be co-located with a large source of carbon dioxide, such as a coal-fired power plant, where CO2 would be sequestered — and the coal industry is still struggling to master this in a cost-effective way.

"The cost of capturing CO2 is immense. So you need to capture the value of the CO2 and utilize it in a beneficial way," said Buscheck. He adds, however, that injecting the horizontal wells with nitrogen only could also be economically viable. But his preference would be to use CO2, too: "We can reduce emissions both by sequestering CO2 and by storing renewable energy. When you add CO2 to the equation, you can actually have a negative CO2 footprint."

As with conventional geothermal plants, LLNL's concept leverages technologies and research from the fossil fuel industry. "This is all about synergy," Buscheck stressed. "With geologic CO2 storage, by far the biggest challenge is over-pressure. With traditional geothermal, the biggest challenge is under-pressure. One system has what the other system lacks."