With growing momentum behind the transition to a low-carbon economy, they refashion themselves as future-forward or run the risk of becoming obsolete.

As the first major oil and gas company to set such an aspiration, the announcement represents another sign that major change is coming in the sector in the wake of global consensus — achieved at the Paris climate conference in 2015 — that the world will work towards limiting global temperature rise to "well below" 2 degrees Celsius.

Banks and investors are increasingly looking to align their investments with the Paris Agreement, demanding greater transparency from energy companies on just how they are preparing for the low-carbon transition while plummeting costs and soaring demand for renewables are transforming the global energy market.

With this growing momentum behind the transition to a low-carbon economy, oil and gas majors now have a choice: take bold steps to refashion themselves as the low-carbon energy companies of the future, or continue business-as-usual and run the risk of becoming obsolete.

But as primary energy suppliers — and sources of significant emissions — how can oil and gas companies secure the long-term prosperity of their businesses while doing their part to put us on the path to a climate-safe, prosperous future? That’s where science-based targets come in.

Only a finite amount of emissions can be produced if the world is to stay below the 2 degrees Celsius warming threshold. This is often referred to as the global "emissions budget." Breaking down this budget to the sector and company level is at the core of the Science-Based Targets initiative Sectoral Decarbonization Approach (SDA).

Under the approach, each company is given their own slice of the budget. If your emissions reduction plans allow you to stay within your slice, then you have a science-based target.So, what does this mean for oil and gas companies?

If we look at the International Energy Agency’s (IEA) 2 degrees (2DS) and beyond 2 degrees (B2DS) scenarios we can see that between 2015 and 2050, absolute CO2 emissions from all the world’s energy use needs to fall by 63 percent and 88 percent to give us a fifty-fifty chance of limiting global temperature rise to 2DS and 1.75 degrees Celsius (B2DS), respectively.

For a company to align itself with a 2 degrees Celsius future and secure a science-based target, they would need to align their level of ambition with those set out in such scenarios.

The only way an oil and gas company can align with 2 degrees Celsius scenarios without reducing the emissions intensity of its energy products is by declining the production of its energy products. If the company wishes to grow its production of energy, it will need to increase its share of production from low and zero-carbon energy sources. In doing this, the company has reduced its emissions intensity so that it can grow production without exceeding its carbon budget. 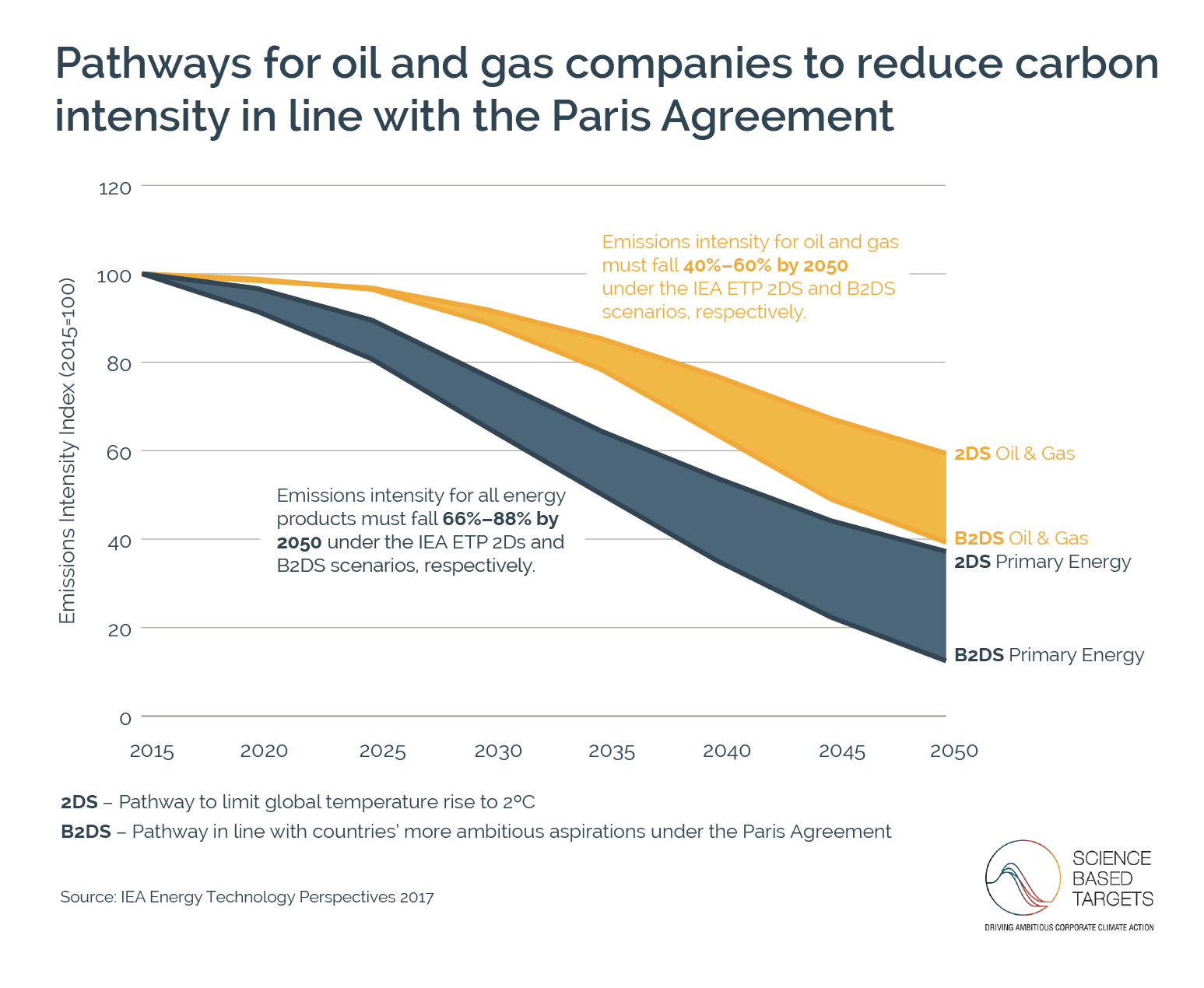 Essentially, this means transitioning from the current mix dominated by fossil fuels towards one that is dominated by renewables.

Companies such as Orsted — formerly Danish Oil and Natural Gas (Dong) and now the world’s largest operator of wind farms — and Total are already leading this shift. Shell’s ambition will also see its spending in clean energy sources double, putting it on the path to a more diverse and lower carbon mix of energy sources. So, how can the Science-Based Targets initiative help?

Knowing how much and how quickly they must reduce their emissions and diversify their business models helps oil and gas companies prepare and transition early.

It is time for oil and gas companies to embrace the opportunities of the once-in-a-generation economic transition. The Science-Based Targets initiative aims to guide the transition. Its SDA approach, for example, is a sector-specific method that helps companies understand their own emissions budget and set science-based targets in line with this budget.

Knowing how much and how quickly they must reduce their emissions and diversify their business models helps oil and gas companies prepare and transition early, leaving them less exposed to transition risks including high reliance on unproven technologies like carbon capture and storage (CCS) technology.

We are currently developing a methodology tailored to the oil and gas sector, with the aim to complete this in Spring 2019. In the meantime, the first step for oil and gas companies wanting to future-proof their growth is engaging with Science-Based Targets initiative, helping us to develop the methodology for the sector and indicating their intention to set a target by committing to our call to action.

The math in climate finance isn't adding up

You, too, can master supply chain emissions

See all by cynthia cummins