The backstory on how the Butter Solar Project spreads solar across the Midwest.

Last week, Organic Valley became the latest company to announce it is on track to be powered by 100 percent clean energy. That makes the dairy co-operative the largest food company in the world to do so, according to its marketing team.

But if you are just focusing on the headline, you’re missing most of the story.

That’s because Organic Valley figured out a unique deal structure that is creative and complex, necessitating collaboration with organizations from different sectors. The result: 32 megawatts installed at 10 locations feeding into 13 municipal utilities in three states, known collectively as the Butter Solar Project.

Collectively, the Butter Solar Project spreads the benefits of community solar to 23,000 people in rural communities in the Midwest, and gives Organic Valley, Dr. Bronner’s, Clif Bar and the city of Madison, Wisconsin, the right to talk up their role in helping make that happen.

Here’s how the arrangement works

The energy developer — OneEnergy Renewables — built solar projects. The local municipal utilities — the Upper Midwest Municipal Energy Group (UMMEG) — buys the energy from the solar panels to power its customers. Then, the organizations committed to transitioning to clean energy — Organic Valley and others — buys the renewable energy certificates (RECs) from the solar projects.

By buying the RECs, the companies are enabling the municipal utilities to build new solar projects. UMMEG, a joint action agency, buys wholesale power for its customers, meaning one of its most important functions is finding affordable energy. Without RECs offsetting costs, it doesn’t pencil.

This is a project that exemplifies using business to have a positive impact on the planet and people living on the planet.

In other words, deal structure catalyzed a chain reaction that brought more clean energy to the grid while creating a new model that others could emulate.

"This is a project that exemplifies using business to have a positive impact on the planet and people living on the planet," said Darcy Shiber-Knowles, senior quality, sustainability and innovation manager at Dr. Bronner's. "The scale of it and the potential for it to be replicated as a model are all really exciting. I want this type of model to be copied and I hope it spreads." 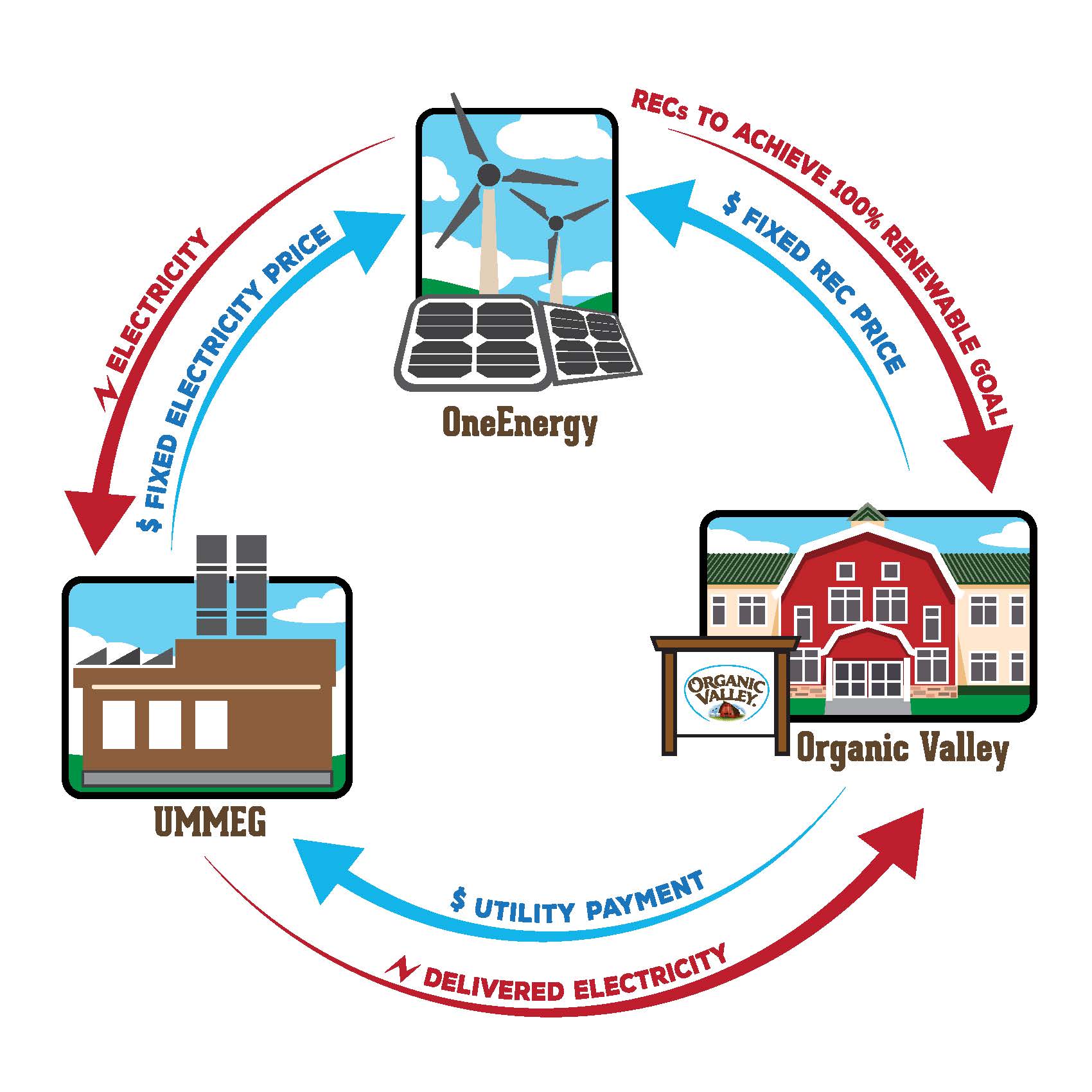 How did Organic Valley come up this a unique structure that added 32 megawatts of solar in the Midwest? It started with the cooperative setting a goal in 2017 of achieving 100 percent clean energy.

Though the organization has gotten large — it did more than $1 billion in sales last year — the company aims to continue to support its region when thinking about its energy strategy, according to Stanley Minnick, Organic Valley’s energy services and technology manager.

"This notion that we could just buy our way into clean energy without additionality, it wasn’t an option for us," Minnick said in a phone interview, referring to when companies buy RECs from existing clean energy projects without building additional renewable capacity. "We wanted to make sure that our investment was going to contribute to more projects and produce energy near our headquarters and facilities."

If someone made me put a term to [the project], I would call it hyper-additionality, because it was kind of all or nothing.

Minnick said Organic Valley reached out to its local municipal utility to explore the idea of adding solar to its energy mix to benefit its customers (which included Organic Valley) and sell the RECs to Organic Valley. As it turned out, there was more interest in clean energy options from other service areas than Minnick anticipated — 10 communities in total, which spanned UMMEG’s 13 municipal utilities.

Now Organic Valley had a new challenge: The demand for new solar projects outstripped the company’s REC requirement. So it had to find other organizations to buy the additional RECs to keep the cost of solar low for the rural communities.

Organic Valley reached out to its co-op brand brethren, Clif Bar and Dr. Bronner’s, as well as Lime and the city of Madison, and got them to buy the rest of the RECs.

"Without any of the partners serving the same role as us, none of those projects would have penciled out financially," Minnick said. "If someone made me put a term to [the project], I would call it hyper-additionality, because it was kind of all or nothing. We had to go for it all or we weren’t going to get anything.

Why did Organic Valley use RECs to meet its clean energy goal?

According to the company, Organic Valley had some constraints on what type of renewable procurement deal it could seek. As a cooperative, its ability to benefit from tax credits for solar was limited, and the Wisconsin regulatory environment made a power-purchase agreement (PPA) an unattractive option.

RECs, which verify clean energy has been created, are sometimes considered a less beneficial procurement option, as it can be unclear where the power comes from and don’t necessarily lead to more renewable generation capacity being added to the grid.

Organic Valley’s arrangement is a creative application for RECs, in which the company was involved as a partner to know where and when clean energy was coming online.

"We’re basically sharing the bounty of these projects with everyone in these small towns and communities," Minnick said.

What’s next for Organic Valley?

While happy with last week’s announcement, the company sees this as just a step in its journey. As a cooperative, many emissions associated with the company are from the farms it represents — nearly 2,000 farmers in 34 states. Also, a portion of its emissions (the company is unsure what percentage) comes from its agricultural activities.

Last week’s deal doesn’t address either of those impacts. Organic Valley is now looking at what it would take to become carbon-neutral.