It’s time to face climate change with acceptance. Not acquiescence, not resignation. But acceptance that we are where we are, it’s regrettable and scary, and we have to deal with it. Now and for the rest of our lives.

Getting to climate acceptance is a difficult personal journey. For many of us, it’s a difficult professional journey too. If you’re not there yet, it’s time to get there quickly. We’ve run out of time for all the other approaches.

Climate of depression, angst and anger

It’s easy to see why so many of us are stuck in very dark places about climate change. The news is bad, and the politics are worse.

Our political leaders (using the term loosely) are losing ground. Far from leading us toward solutions, too many are denying the problems, despite science and the views of the general public. Some are even trying to legislate away the science.

The more you know, the worse it gets. After decades working in corporate sustainability strategy, I thought I understood climate change pretty well. Then I had the privilege of getting to know John Englander and his work on sea-level rise. John taught me how much damage is already done, and how much sea level rise is already "baked in" even if we could shut off every greenhouse-gas source today. It’s a stunning message, but it leaves too many audiences stunned rather than energized.

The stages of climate grief

I struggled with this personally. I felt the depression, the hopelessness, the anger, the malaise. Seeking a path forward, I looked at all the climate models for analysis and policy insights, from IPCC to SDGs to TCFD. None really helped me move past my depression.

Finally, where I least expected it, I found a useful model for coming to grips with climate change: the old, controversial Kübler-Ross five stages of grief model.

It is a decision to give up the simplistic denial, the pointless anger, the trivial bargaining and even the hopeless depression that absolve us of any responsibility to act.

We are reacting to mourning and loss on a global scale. Look at Kübler-Ross's five stages of grief. You can map virtually everything you have said or heard on climate change against one of the stages:

To be rigorous, I’m not saying everyone moves through these stages in order. As the Kübler-Ross experts note these days, people "forget that the stages are responses to feelings that can last for minutes or hours as we flip in and out of one and then another. We do not enter and leave each individual stage in a linear fashion. We may feel one, then another and back again to the first one." Unfortunately, when it comes to climate change, people seem to stay in one stage forever.

Climate acceptance doesn’t mean being content with an awful reality. In the Kübler-Ross model:

[Acceptance] is often confused with the notion of being "all right" or "OK" with what has happened. This is not the case. Instead, this stage is about accepting the reality, and recognizing that this new reality is the permanent reality. It is the new norm with which we must learn to live.

How do you reach climate acceptance? It’s a decision to accept the new reality. It is a hard decision, but there is a calm and a peace once you get there. It is energizing, not numbing.

What do you do when you get there? As a new arrival at acceptance, I’m still working this out. So far, I’ve found four key steps:

Paradoxically, acceptance of the ultimate climate negative can be a true positive for many of us. This isn’t some other form of denial: there will be lots of people who lose in this process, whose homes and jobs and communities won’t be viable. But overall, development will still happen, people will get jobs, people will even take vacations and build vacation homes — just not in the same places and same ways as before.

As the Kübler-Ross experts say about acceptance: "Finding acceptance may be just having more good days than bad ones. … We can never replace what has been lost, but we can make new connections, new meaningful relationships, new inter-dependencies. Instead of denying our feelings, we listen to our needs; we move, we change, we grow, we evolve."

It's time to stop clinging to a world we’ve lost. It’s time to move, change, grow and evolve in the new climate reality we’ve created. 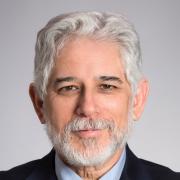 Corporate sustainability under Trump: Stakes just got a lot higher

See all by Scott Nadler