How to repackage packaging

This is adapted from "The Future of Packaging: From Linear to Circular," by Tom Szaky and 15 industry leaders in innovation and sustainability (Berrett-Koehler Publishers, 2019).

Everyone who touches packaging has a role to play in ensuring that its value is captured and that it doesn’t add to the world’s pollution. But who should be first in line to take financial responsibility? Is it the producers who make it, the retailers who sell it, or the cities where all of this takes place? Or is it, perhaps, the consumers who choose to buy it?

Despite the global fragmentation of laws and waste management systems, government has a major role in changing consumer and industry behavior when it comes to wasteful packaging. We see that especially when encouraged through a mode we all understand: money — in the form of fines, penalties and incentives. When such levers are put into place, people improve their behavior quickly and dramatically.

Businesses are subject to vast amounts of government regulation in the interest of protecting consumers and ensuring a level playing field. Among other things, laws today require that labels and packages provide more facts about the contents inside and aim to preserve our health. In the world of consumer packaged goods, we see this with certified-organic and organic-transitional labeling, specific ingredient bans, fair-trade sourcing conditions and acceptable levels of certain chemicals in products and packaging. 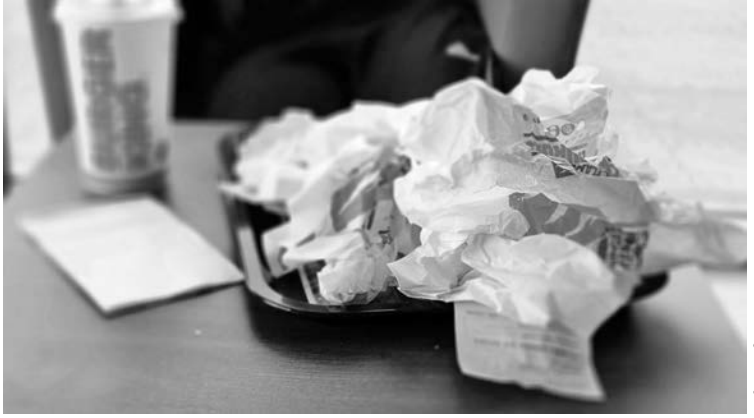 But can you think of any laws regulating the end of life of the packaging itself? Many such laws exist around the world, especially in developed countries. In the United States, some mandatory recycling laws exist at the state and local levels, but federally there are none.

Business brings tax revenue and jobs to cities, states and countries, so business interests often drive government regulations. But there are regulations that businesses don’t like, mainly those that cost money and reduce the ability to maximize profits. For most businesses and entrepreneurs, regulations are often viewed as financial and legal barriers to growth, and corporations see it as an obstruction to their desire to maximize return for their shareholders.

While their member companies finance recycling and resource management systems throughout the world, trade associations such as the American Institute for Packaging and the Environment and the Grocery Manufacturers Association have opposed legislation in the United States under the philosophy that packaging disposal, recycling and litter cleanup costs should be the responsibility of government.

Thus recycling laws get left to the states in the form of bottle bills; the banning of Styrofoam containers, plastic bags and drinking straws; and guidelines for the disposal of e-waste, paint and pharmaceuticals. This means the make-use-dispose linear economy pipeline currently employed around the world becomes only more and more pronounced and entrenched as time goes on. Year after year manufacturers create new products at a fraction of the cost of their predecessors, so more people now own more and more things —things that have a shorter and shorter useful life.

Policies like bottle bills tend to get pushback from industry. Although bottle bills provide consistent, high-quality recycled material, industry often argues that such regulations are cumbersome, expensive and a logistical nightmare. As a result, they end up not being passed; in the end governments can regulate only to the point that society is willing to bear.

Even with broad availability of recycling programs in much of the United States, the recycling rate for PPP — including traditional curbside recyclables such as aluminum, glass, plastic, paperboard, newspapers, phone books and office paper — has been stagnant for the past decade.

One solution may be to shift the responsibility from taxpayers and governments to product manufacturers, as they have the distinct ability to choose what package forms they use for their products. With this in mind, should they be the primary responsible party to pay for the proper end-of-life management of their products and packages, even if this cost finds its way to the consumer in the end?

Extended producer responsibility (EPR) is the policy concept that extends a manufacturer’s responsibility for reducing upstream product and packaging impacts to the downstream stage, when consumers are done with them. There are more than 110 EPR laws currently in place for over 13 product categories in more than 30 U.S. states. The United States, however, is currently one of only three nations of the 35-member Organization for Economic Co-operation and Development that does not have an EPR system specifically for packaging in place or under development.

EPR packaging laws have been in place for up to 30 years in 11 countries in Asia, South America and Africa, as well as in Australia, 34 European nations and five Canadian provinces. While not all EPR programs are alike, the best ones are not voluntary in nature and produce recycling rates far higher than what we have experienced in the United States. British Columbia and Belgium, both of which have EPR packaging laws in place, have attained nearly 80 percent PPP recovery.

Voluntary industry-led programs, while laying a foundation for collection and recycling systems, rarely lead to systemic changes that significantly increase the quantity and value of the materials collected, and they do not provide a sustainable funding source across all producers in a certain category. For instance, although voluntary initiatives to collect plastic films at retail outlets have helped reduce contamination of plastic bags in the recycling stream, many U.S. municipalities deem this effort insufficient, resulting in a flurry of bag bans and fees seeking to significantly change consumer behavior and decrease the use of plastic shopping bags. 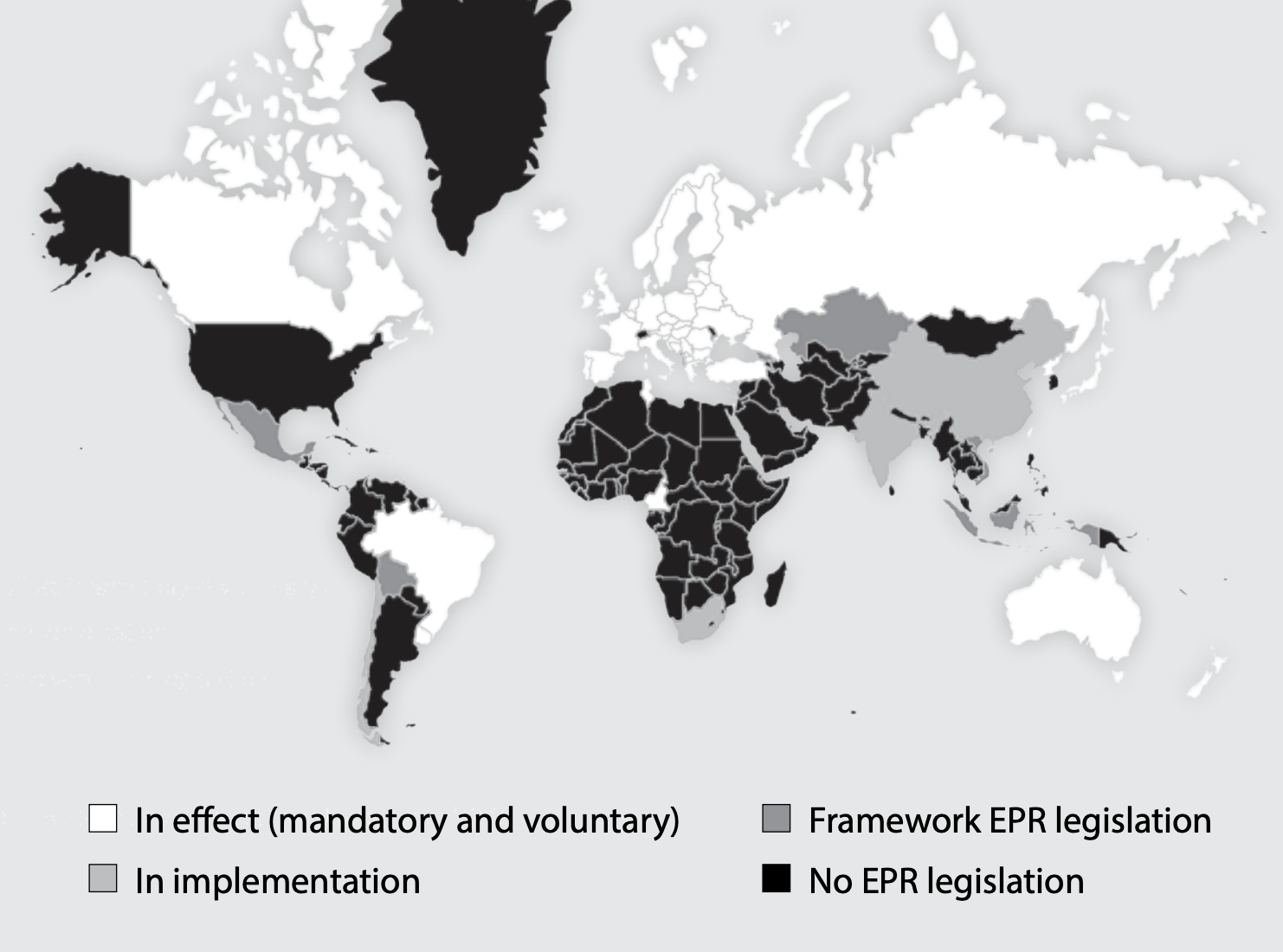 EPR laws that require brand owners to cover the cost of recycling post-consumer PPP provide an incentive to producers to reduce the amount of packaging they use, incorporate environmentally preferable materials into their packaging, and maximize material recovery and quality. In contrast to the fragmented municipal programs currently in place, well-designed EPR systems provide consistency by establishing statewide producer-funded programs that accept the same materials in all cities and towns and convey the same educational messaging.

Such policies also help meet the supply needs of industry. Today many brand owners that pledge to incorporate recycled content into their products often cannot procure enough recycled material to meet their needs. With strong EPR laws, producers stand to gain access to greater amounts of post-consumer recycled material. These programs also offer financial incentives that encourage manufacturers to design their packaging to be more recyclable.

EPR packaging laws are spreading globally and growing in viability partly because the recycling or disposal cost is typically paid by manufacturers and their consumers, not taxpayers and government agencies, freeing up millions of dollars for other municipal services. In addition, these programs provide a direct financial incentive for manufacturers to use materials that are less expensive to recycle, increasing their value and opportunity to be brought back into the circular economy.

EPR packaging systems are continually evolving. The most innovative are those that charge a fee to manufacturers for each packaging material type based on its cost to recycle or dispose of. One such system charges manufacturers less for producing glass than plastics, as well as less for PET and HDPE containers, compared with films, polystyrene and other plastics that are not easily recycled. This closed-loop recycling system provides a direct financial incentive for manufacturers to choose environmentally preferable (often more highly recyclable) materials in their packaging.

To be clear, all of this extra cost does directly end up in the price of the product a consumer pays in the end. But perhaps this cost is better incurred at checkout than in negative externalities — like greenhouse gas emissions, marine debris, resource scarcity, toxicity, and food and drinking-water pollution — and continuing the burden on municipalities and taxpayers to subsidize waste.

Editor's note: This excerpt was originally attributed to another author in this essay collection and the byline updated to correct that error.

See all by Scott Cassel