Diamonds are prized for their multifaceted glint. Their impact on culture is likewise many-sided: On the one hand, they are valued as symbols of prosperity and devotion. On the other, they are synonymous with the dark economics of "blood diamonds," mined in war zones and sold to finance conflicts.

Any large-scale retailer of diamonds and the "3TG conflict minerals" — gold, tin, tantalum and tungsten — should be aware of the points along its supply chain where these resources may be introduced, but no regulation mandates their monitoring or disclosure. Choosing to protect both diamond miners and the environment from unregulated small-scale mining operations is a lifetime commitment for companies, it's also one that consumers are beginning to expect.

"Shoppers are increasingly unwilling to source diamonds from unethical sources," said David Bouffard, vice president of corporate affairs for Signet Jewelers, which credits more than 60 percent of its sales to diamond products, during a June 7 GreenBiz webcast. "They now want to be assured that companies and industries manage supply chains so that the products they buy are not associated with human rights abuses or environmental damage."

This month, Signet became the only U.S. jeweler to file a fourth consecutive Conflict Minerals Report to the Securities and Exchange Commission in accordance with Section 1502 of the Dodd-Frank Act, which asks companies to voluntarily disclose conflict minerals originating in the Democratic Republic of Congo (DRC) and surrounding countries. It was one of four companies to have its filing independently audited in 2014, 2015 and 2016, along with technology companies Kemet, Philips Electronics and Intel.

"We see this not only as a moral imperative but a business imperative," Bouffard said. The moral imperative is clear: A decade-long civil war in Sierra Leone, fueled by sales of unregulated diamonds, claimed over 75,000 lives and displaced millions of people. And money raised through sales of conflict minerals is believed to be behind recent violence in the Central African Republic, which borders north of the DRC.

While the United Nations’ Kimberley Process Certification Scheme, created in 2000 to prevent future tragedies such as the one in Sierra Leone, certifies the origins of blood diamonds in conflict zones, it has been criticized for ineffectively stopping international conflict diamond sales. This leaves businesses to dig into their footprints to find risk points.

"The jewelry supply chain is complex and global, and the highest-value materials are found in some of the world’s least developed places," Bouffard said. "The primary risk point is at the mining companies — or the 'diamond choke point' — where it’s possible to establish the origins of minerals and metals." 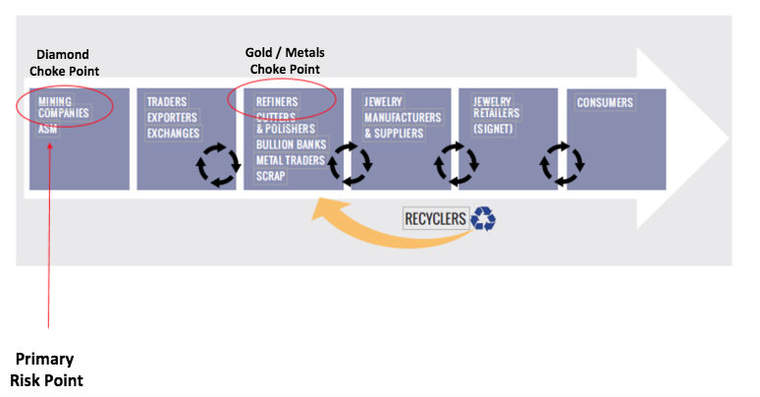 The art of conflict management

"ASM is the biggest risk as it’s largely unregulated," Bouffard said. Entirely moving away from conflict-riddled areas won’t solve the industry’s problems, though, as about 100 million people are employed in artisanal and small-scale mining (ASM) in 80 developing countries worldwide, comprising 20 percent of gold and diamond mining.

"ASM is undertaken by individuals using rudimentary tools in conditions of overcrowding" and often using child labor, said Dorothée Gizenga, head of the Diamond Development Initiative (DDI), an organization that works to ensure the safety and sustainability of diamond mining communities. "Formalization seeks to integrate ASM into the formal economy in ways that benefit miners and communities."

Signet focuses on building strong relations with its suppliers, as well as funding organizations such as the DDI, to ensure safe and fair conditions for its diamond miners — some of whom work in ASM operations — while creating greater value for a new wave of millennial customers who want proof that their purchases are ethically sourced. The company is a founding member of a group that developed guidance on safely sourcing minerals (PDF) through the Organization for Economic Cooperation and Development (OECD).

Further measures such as the "open-source" Signet Responsible Sourcing Protocol (SRSP) for gold (PDF), 3Ts (PDF), diamonds, silver and platinum group metals (PDF), released between 2013 and 2017 — with plans to launch a protocol for colored gemstones in 2019 — allow the company to operate in high-risk areas while establishing best practices for the industry.

Signet is the only U.S. jeweler to file a fourth consecutive Conflict Minerals Report to the SEC in accordance with Section 1502 of the Dodd-Frank Act.

As the world’s largest retailer of diamond jewelry, with annual sales of about $6.4 billion through brand-name stores such as Kay Jewelers, Zales Jewelers and Jared The Galleria of Jewelry, Signet could stem the flow of conflict minerals throughout the luxury market.

Focusing on supplier relations, in 2005 Signet became a founding member of the Responsible Jewellery Council (RJC), which publishes a best-practices guide for jewelry material sourcing. Signet mandates RJC certification for its suppliers.

"Signet has 200 major suppliers [of a total of over 800 suppliers], representing approximately 98 percent of billables," Bouffard said. "Nearly all of these 200 are either currently RJC members or in the process of becoming members. Since we began mandating RJC membership, Signet has not lost a supplier for this reason." The only reason it would disengage with a supplier is if it refuses to comply with RJC guidelines, he said.

Bouffard said Signet’s compliance requirements and guidance distribute the risk and cost of compliance throughout the supply chain: "It’s not an incremental expense, but we’re asking suppliers to join the RJC and make claims about the provenance of goods that they’re manufacturing and selling to us. It’s an expense borne throughout the industry."

Partnering with the DDI has allowed Signet to make a direct, positive impact on mining communities. It funded two mobile classrooms for DDI’s mobile schooling initiative.

"Children in artisanal mining families often don’t have access to school, their future is bleak and they have a high risk to be pulled into mining operations," Bouffard said. Schooling takes children away from the mines and gives them the skills to create the infrastructure mining communities lack.

By 2020, Bouffard said that Signet wants to bring the RJC to India and China, both of which are diamond-refining hubs. It is also refining the tools of its ethical supply chain management processes. Currently, Signet uses inventory management software to track the diamond supply chain, but "it is not yet possible to track all diamonds to an original producer source." That because many stones are traded several times before being set into jewelry.

Many stones are traded several times before being set into jewelry.

"Substantial quantities of diamonds are recycled so their original provenance is lost," he said. "Collaboratively with others in the industry, we are currently exploring the possibilities that new technologies like the blockchain might create to further enhance the transparency and integrity of the complex global diamond supply chain."

Despite challenges and setbacks, Signet wants to "help all actors in the industry understand why progress is in their own interest, identify and isolate bad actors and establish clear governance and transparency."

Like anything worth passing down through generations, perfecting the process takes patience and commitment.

Supply Chain Challenges -- Tackling the Devil in the Detail