<p>What do Northern California&#39;s Bay Bridge, a huge soccer stadium being built in Brazil and some of the most popular films and video games produced by Lucasfilm have in common? Technology that Autodesk believes can help change the world for the better.<br /> &nbsp;</p>

Animation. It's not just for cartoons anymore. Animation and its more sophisticated sister, simulation technology, are becoming more important to businesses, though it might not be readily apparent to consumers.

About half the images in an IKEA catalog use simulated backgrounds.

As much as 90 percent of car commercials use computer generated imagery.

In product and building design, 2D imagery has been around for years and 3D renderings are considered table stakes for design tools. The latest in simulation software can pull volumes of complex data beyond simple measurements (think comparative load or stress tolerances) and layer that information into images.

Depending on the tool used, the results can be striking, almost life-like visualizations that show how a product, building or structure, like a bridge, will perform based on how it is used, the conditions around it, its design, materials and even variables such as the position of a joint -- before a single component is manufactured or ground is broken.

It's precisely that type of technology that Autodesk sees as a growing element of its business and an essential tool for sustainable design. The $2.2 billion design software company has made a major bet that the rest of the business world will see the benefits of simulation technology as well.

Autodesk has invested more than half a billion dollars in simulation tech since 2005 and developed products as well as a pay-as-you-go model in order to put simulation capabilities into the hands of more people, CEO Carl Bass and several of the companies executives told tech reporters in a recent media summit.

The two days of briefings expanded on the company's Autodesk University users conference last fall, which focused on the future of cloud computing, its myths and realities and how Autodesk is leveraging cloud capabilities in its products. The media summit coincided with the rollout of the newest Autodesk offerings as well as in-depth looks at the capabilities provided by those tools. 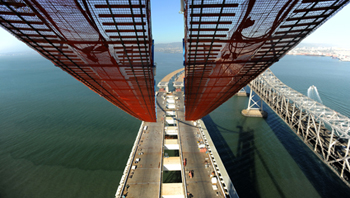 The show-and-tell sessions included a tug boat trip out to the San Francisco-Oakland Bay Bridge, where a seismic retrofit is under way and a visit to the headquarters of LucasFilm's visual effects division, Industrial Light and Magic.

Damaged during the 1989 Loma Prieta earthquake, the seismic retrofit of the 75-year-old Bay Bridge has finally reached its home stretch. When a tug boat laden with tech journalists chugged beneath the bridge, workers were installing the main cable for the new 525-foot tower on the eastern span.

The section of the bridge with the tower, designed as a visual signature for the structure, forms what will be the world's largest self-anchored suspension span. Its construction was just one of a series of complex projects that make up the $7.2 billion overhaul of the bridge, which is scheduled to be complete next year.

Simulation technology has been key throughout the design and construction process -- and not just for engineers and builders, said bridge project spokesman Bart Ney, in a major nod to Autodesk's products. The technology also has been a mission critical communication tool in helping the public understand the project and got an extreme test in 2009 when the communication team needed to prepare the San Francisco Bay Area for a three-day bridge closure over Labor Day weekend, he said. 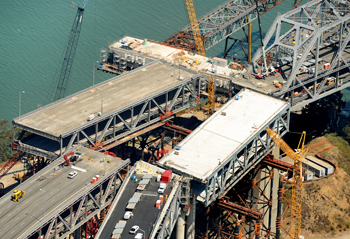 During that time, bridge workers cut loose and slid out a portion of the bridge's East Span -- and then moved a 3,600-ton double-deck section into place to connect the bridge to a short detour necessary for the broader construction project. The 280,000 drivers who typically use the bridge each day had to make other plans for trans-Bay travel that weekend, and the visual simulations that appeared in newscasts and public service announcements in the weeks before the holiday alerted motorists to closure.

Completing that portion of the project, in itself a huge engineering challenge, and getting the public's support wouldn't have been possible without simulation technology, said Ney.

"The entire (engineering) operation was like a complex ballet," he said, "but you don't even get to do this unless you get people to buy in. Animation has become a very important communication tool for the (California) Department of Transportation.

"Caltrans was the first to use animation in this manner and I think you're going to see this technology used by other transportation departments in the world to build the infrastructure we need."

In Brazil, the stadium architects of Castro Mello Arquitetos and EcoArenas, a sustainable design and consulting firm, have a green vision for the cities in Brazil that will be hosting the 2014 FIFA World Cup soccer games. The plan, called CopaVerde, calls for a series of new facilities that are to be constructed as green buildings.

As part of what is intended as a friendly competition among a dozen cities, Castro Mello and EcoArenas are constructing a stadium in Brasilia built to LEED Platinum standards, the highest level of certification available from the U.S. Green Building Council.

The structure's features will include a white roof with space to accommodate a 2.5 megawatt solar power system, which would be the largest in the world, as well as ponds and cisterns for stormwater management.

"And within a 3-kilometer radius, a walkable distance, you'll find all the services of a city," said said EcoArenas founder Ian McKee. "That would be a first in a country known for its traffic problems." 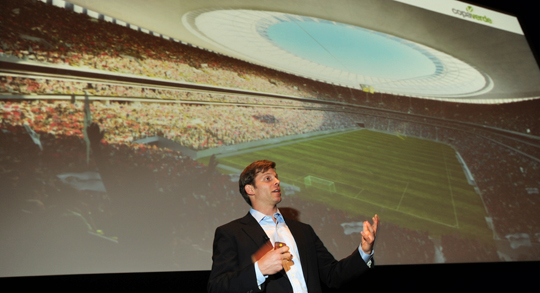 CopaVerde is more than a plan for sustainable sports arenas, said McKee, whose colleagues also are using Autodesk tools. "We launched this competition as the best way to transform cities," said McKee, speaking at ILM before a projection of the planned Castro Mello stadium. There's no better way to send a message globally than to use sports and entertainment."

Dave Story, the new CTO for LucasFilm, strongly seconded that notion. The company has been using Autodesk software along with a formidable array of proprietary tools developed by LucasFilm for years, he said. 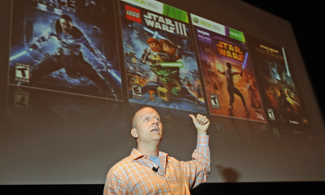 Tracing the history of LucasFilm, Story said the evolution simulation and collaborative visualization technology has helped the company meet growth challenges that include:

Complexity. People in the film industry "come to us with their hardest shots," he said. "We push hard on Autodesk to make their tools better and we do (the same)," said Story.