Sky’s West London campus is undergoing a transformation. In November the doors to its new Believe in Better Building were opened, and by the end of this year three more buildings will join it as part of an ongoing plan to streamline operations and bring around 8,000 staff together on the one site.

Around this ambitious redevelopment, Sky has set itself a raft of environmental and community engagement aims. During Green Sky Thinking week, Sky hosted an event with principal contractor Mace to share how the two organizations worked together to deliver on these mutual goals in the development of the Believe in Better Building.

David Hickey, Sky’s construction director for the campus master plan buildings, explained, “We want to create something that is attractive, makes people want to visit and works for Sky as well.” The Believe in Better Building is the latest part of this vision. It’s home to the Sky Academy Careers Lab, a new full-day careers experience for 16- to 19-year-olds, and Sky’s new training and development suite, as well as working space for over 200 staff.

Part of Mace’s success in tendering to construct the Believe in Better Building is because of ideas it brought to the table around community engagement, which mirror many of Sky’s own Bigger Picture commitments and its planning obligations. “Societal engagement is an important factor,” said Hickey. “A lot of the time on construction projects it can tend to drift from focus. It was something we were absolutely passionate about with Mace to try and make sure it made a difference.” 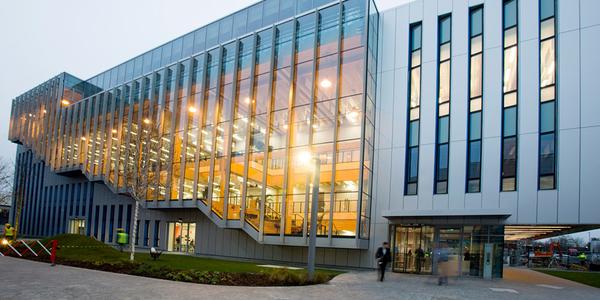 The project has established targets for local people working on-site and building experience for trainees and apprentices, which are spread over five years. To meet these, Sky and Mace’s project sustainability teams and Sky’s construction employment and skills team joined forces. Eighteen months in, it’s up to 56 local people working on site — against a target of 40 — and seven apprentices against a goal of 10.

But it goes deeper than the numbers suggest. Frank Spraggs, employment and skills manager at Sky, said, “If you want to make a tangible difference, it’s about asking what careers you can offer people. What I didn’t want to do was run a course saying you get a CSCS [Construction Skills Certification Scheme] card and you can be a laborer.” Instead the training has been used to create “super operatives” with several CSCS qualifications. Those who work on-site for four months will be funded to take further qualifications if they choose.

“So people can see the progression. It gives them a sense that they can make a career of it. We’ve trained 144 people, we’ve got 56 now working on site and we only lost two people who said it wasn’t for them,” added Spraggs.

Over 10 months the project team has completed 441 hours of local volunteering, including work to maintain the neighboring River Brent for the Canal and River Trust, achieved over $12,000 of fundraising, $11,500 of sponsorship and has implemented initiatives such as trialing work experience with the Teenage Cancer Trust (an existing partnership Mace shared through the project) for young people in remission — two of which are directly employed with Mace.

Stephanie Taylor, sustainability manager for Mace, agreed the collaborative approach has worked well: “All the community events, the career projects, all the fundraising was done together and it brought a lot more involvement and greater outcomes.”

As much as the partnership between Sky and Mace has been crucial in amplifying community engagement and delivering on its skills and employment goals, it’s also been a key driver in delivering the project’s environmental aims.

“This project was exciting for me for two main reasons,” said Taylor. “One of them was the clear direction from the client who from day one established a clear set of KPIs around what they wanted us to deliver. And on the back of that the opportunity for a full-time sustainability manager on the project to help shape the strategy and push well beyond what we committed to at the tender stage.”

Campus-wide aspirations include BREEAM Excellent environmental ratings for the buildings, and specific KPIs around aspects such as responsible sourcing, the distance materials travel to site, biodiversity and the embodied carbon of the builds.

A big visual clue to how the last one has been achieved is the exposed glulam timber frame on show inside the Believe in Better Building. This has helped cut a big chunk from the building’s embodied carbon and marks it out as the U.K.’s first multi-story timber commercial office structure. And as Taylor said, the frame is also lighter than a conventional concrete frame, which means fewer foundations are required, meaning less material and lower carbon.

In fact, so impressed is Sky with the timber frame solution of this building that it changed the design of two others it’s constructing on site to adopt the same technology. This goes to show how a combination of clear vision and consistent collaborative effort can go a long way.

This article originally appeared at 2degrees.