How to survive like 'The Martian'? It's beyond science

Watching astronaut Mark Watney "science the shit out of" his predicament in the film "The Martian" had me on the edge of my seat. But not because of science; it was because of his attitude. It's the attitude of a human being faced with the ultimate scarcity scenario: If I mess up, I die.

I won’t spoil the plot, but Watney finds himself the only person alive on a dead planet. True, it’s Mars, but I couldn’t help but imagine this could be Earth, the blockbuster version of Easter Island. Our Earth when we reach the final moment of consumption and nothing is left but us.

In this light, Watney is confronted by the final scene of our unsustainable, industrial path to living. And he wants to live. His attitude allows him to turn scarcity into abundance. Not enough food to live? Grow potatoes fertilized with human poop. Not enough moisture? Burn a fossil fuel to make water. Can’t communicate with words? Go binary. Maybe we can science the shit out of un-sustainability.

What I love about Watney is how he is able to accept and own his predicament, and do what needs doing. He doesn’t waste a second in denial about why he has no food, or why the climate of Mars is changing. It simply doesn’t matter because it distracts him from action. Watney doesn’t expect someone else to make things better, he does it, now.

In his quest to create abundance Watney is fantastically creative with his analytics: Photovoltaic solar power is harnessed to give him mobility — which gets him to the Pathfinder so he can recycle technology and call Earth — so that he can coordinate a rally point and make a ridiculous Iron Man assent using all the air in his suit for propulsion.

And Watney is not alone. He has a host of colleagues working with him to solve his rescue dilemma. The Chinese reveal a secret booster program that can get to him in time. A zany orbital dynamicist demonstrates a planetary fly-by using a pen and childish rocket sounds. His own crew adds years to their mission by going back to retrieve him. Smart people are working hard, solving problems, together.

The Mars landscape is beautifully portrayed in the movie. But it is a landscape devoid of water, clean air and human community. Watney sums it up for us: "At some point, everything goes south on you, and you’re gonna say, 'This is it. This is how I end.' You can either accept that, or you can get to work."

I love that Watney, the crew and the Earth all refuse to accept that this is the end, and get to work. At the core of the movie is a simple message — every human being has a basic instinct to help each other out.

It gives me hope. Hope that as we confront the challenges of human sustainability that we can get to work, helping each other out.

We’ve never known greater challenges than our time. The U.N. is hosting a global discussion on climate change this fall. Substitute the word "planetary" for global; it feels different. Planetary climate change. The climate of Earth is changing. The storms we are enduring look a little like the Mars storm that crushes Watney like a bug.

Now substitute "ship-wide" for "planetary." It feels different again. Our ship, which flies along in space, has problems with our energy, water and food systems. Space, which Watney reminds us, does not cooperate. If we mess up, we die.

If you do the math, by 2050 we need to feed 9 billion people a day. We are going to have to science the shit out of this. Let’s get to work. 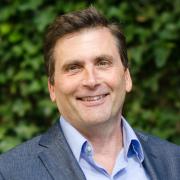 Founder and CEO
Paladino and Company

The case for a human-centered sustainability strategy

See all by Tom Paladino