In honor of Independence Day, the following is adapted from The New Grand Strategy: Restoring America’s Prosperity, Security and Sustainability in the 21st Century, by Mark Mykleby, Patrick Doherty and Joel Makower, published by St. Martin’s Press.

What does America stand for?

In these hyperpartisan times, one might think any assertion of national purpose would be controversial. On the contrary. The nation’s founders believed a shared and enduring purpose was so important that they put it at the top of the Constitution:

We the people of the United States, in order to form a more perfect union, establish justice, insure domestic tranquility, provide for the common defense, promote the general welfare, and secure the blessings of liberty to ourselves and our posterity, do ordain and establish this Constitution for the United States of America. 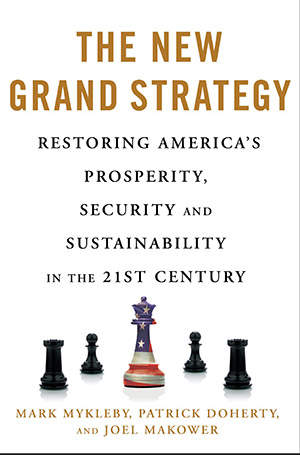 Those aren’t just 52 well-crafted words. As Hubert Humphrey reminded us, they’re a call to action and demand constant tending from all of us. The Preamble’s six action words — form, establish, insure, provide, promote and secure — are the great purposes of America’s experiment in self-government. Each represents a thread that, woven together, creates the fabric of who we are and what we are supposed to do as citizens. They are the table of contents for America’s user manual.

As such, the Preamble gives the United States an irreplaceable endowment, a permanent keel to our ship of state. Through those six words, we know why we have a government. We have a test by which we can judge any given course of action. And in that light, these words not only express the promise of America, they also articulate our obligation to America.

Eleven years before the Founders wrote the Constitution, Colonial America was more focused on one massive precondition for self-government. In 1776, Thomas Jefferson and the signers of the Declaration were focused on self-determination:

We hold these truths to be self-evident, that all men are created equal, that they are endowed by their Creator with certain unalienable Rights, that among these are Life, Liberty and the pursuit of Happiness. That to secure these rights, Governments are instituted among Men, deriving their just powers from the consent of the governed. That whenever any Form of Government becomes destructive of these ends, it is the Right of the People to alter or to abolish it, and to institute new Government, laying its foundation on such principles and organizing its powers in such form, as to them shall seem most likely to effect their Safety and Happiness.

Jefferson, while acknowledging in his correspondence that he was “not an advocate for frequent changes in laws and Constitutions,” noted that institutions must “change with the change of circumstances” and “keep pace with the times,” adding, “We might as well require a man to wear still the coat which fitted him when a boy, as civilized society to remain ever under the regimen of their barbarous ancestors.”

For some American generations, living up to the Declaration of Independence and the Preamble to the Constitution means going further than being educated on the issues, participating in civil society and voting. Every so often, it falls to a particular generation to choose a new strategic direction and the governing institutions that support it. Every so often, we need a new approach to how we create the conditions at home and abroad in which we may live out that manifold purpose amid the unique set of challenges, opportunities and knowledge that define the current era.

Every so often, it falls to a particular generation to choose a new strategic direction and the governing institutions that support it.

Over the past century, this was required in the midst of the Great Depression in 1933, at the advent of world war in 1941 and at the dawn of the Cold War in 1947–53. Not only did Americans respond to the challenges, internal and external, that threatened to derail our forward progress, we did so in a way that allowed us to continue advancing the Preamble’s purpose.

This is one of those times. We, all of us alive today, are part of the next chosen generation.

The cause of all mankind

“The cause of America is in a great measure the cause of all mankind,” wrote Thomas Paine, a political activist, philosopher and revolutionary, in Common Sense. His pamphlet, published in 1776 just before the signing of the Declaration of Independence, and 11 years before the Constitution, was a hard-hitting argument for independence. As we would say today, it went viral. It was sold and distributed widely and read aloud at taverns and meeting places. George Washington read it to his troops, who at the time had surrounded British troops in Boston.

Paine is credited with turning the tide of public opinion at a crucial juncture, making it “common sense” that fighting for independence was the only option to take, and it was an option that needed to be taken immediately. It was a call to arms that inspired British subjects in 13 of the 20 British colonial possessions in North America to seek independence from the Crown. Thomas Jefferson may have been the political philosopher, but Tom Paine was the campaigner, the master marketer who sold the “cause” of self-determination to enough fellow colonists to ensure the success of the revolution.

So, what is the “cause of America”? What do we stand for?

We can sum up the great challenge of our era in two words: “global unsustainability.” We, as human beings, simply cannot continue on the economic, social and environmental paths we’ve been on. And the cause we must embrace as a nation is to lead the world’s transition to a more sustainable order. No one else is in a position to do this.

We can sum up the great challenge of our era in two words: “global unsustainability.”

Global unsustainability is not an over-the-horizon danger. It is right here and now. It is causing Americans, and all humans, daily harm. In describing this challenge, we see four global dynamics — what we call “strategic antagonists” — that make the current U.S. and international order unsustainable:

These four intertwined and fused dynamics — or, more accurately, disruptions — make for an immense, wicked problem that is signaling that the global system is now in a process of disarray. Until the United States digests, processes and addresses this wicked problem, the nation will face even more rapid degradation of domestic and global conditions.

The cause of America will be found in taking on the immense global challenge of our age, global unsustainability — environmental, social and economic well-being — not by turning our backs on this reality. Our cause is to figure out a sustainable way forward and lead the rest of the world in that direction.

To do so, we need to get on with the hard work of fixing ourselves instead of squandering precious time on ideological debates and ineffectual dithering. This requires that we, with intellectual and emotional honesty, take stock of where we are, where we are going and from where we’ve come. We need to look at ourselves not only from the perspective of America as defined by our national borders, but also as an actor in a global system, subject to forces and dynamics of a world in which we represent only about 4 percent of the population.

By demonstrating that we have the courage and vitality to reinvent ourselves, we can revive the quintessential American characteristics of innovation, optimism and boldness that the world has come to expect from us.

And, in the process, perhaps America will even earn the credibility and influence needed to lead on the global stage in the twenty-first century.

History's Lesson: Sustainability Requires Everyone in the Trenches

Why sustainability should be America's 'grand strategy'