How to Talk About Climate Change

First, the good news: A vast majority of Americans -- as many 90 percent, depending on how you phrase the question -- think the U.S. should act to curb global warming. Most expect the benefits of a national response to outweigh the costs.

Now, the bad news: Very few have acted on those beliefs. Only about 10 to 12 percent have contacted government officials, given money or volunteered with an organization working to reduce global warming.

So we're concerned, but apathetic.

Those are among the findings of an exceptionally detailed public opinion study called Global Warming's Six Americas 2009: An Audience Segmentation Analysis. The 132-page study breaks down the populace into six groups, which it calls Alarmed, Concerned, Cautious, Disengaged, Doubtful and Dismissive, and analyzes each of their views. It was conducted by the Center for Climate Change Communication at George Mason University, which is led by Ed Maibach.

Disclosure: Ed is a good friend and running buddy. He's also a prominent expert on social marketing, a professor of communications at George Mason U. (PhD., MPH, with prior experience at Porter-Novelli and the National Cancer Institute) and very thoughtful on the topic of how to talk about climate change. When we sat down recently, I began by asking him which of the study's findings had surprised him.

"I found nothing more surprising than the fact that of the group of people most concerned about climate change -- the group we call alarmed -- 75 percent say they have rewarded and punished companies based on their environmental performance, but most hadn't taken the time to write or call their congressman," Ed said.

"They are more comfortable expressing their wishes through they shopping patterns than they are by acting as citizens in a democracy," he added.

It's no wonder many companies that care a lot about their brands -- I'm thinking here of Starbucks, Nike, Coca-Cola, Disney and others -- want to be seen as caring about climate change, along with most of their consumers. Their customers are paying attention.

Americans tend to see themselves as consumers, not citizens, Ed explained. "Therefore it's not surprising that this is how many of us choose to express our wishes for a better world," he said.

Unfortunately, politicians haven't heard the message of public concern, which is why so much horse-trading and compromise was evidently required to get the not-strong-enough Waxman-Markey climate change bill through the House. That's also the reason why the bill faces uncertain prospects in the Senate. Advocates worry that the climate bill is vulnerable to the distortions and cable-news soundbites that have brought more heat than light to the current health care debate.{related_content}

One problem unearthed by the Center for Climate Change Communication interviews is that Waxman-Markey's cap-and-trade approach is among the least popular energy and climate policies. Among all groups, there was more support for funding research into renewable energy sources (92 percent), requiring automakers to increase the fuel efficiency of vehicles (79 percent), providing tax rebates for people who purchase energy-efficient cars or solar panels (85 percent), expanding offshore oil drilling (75 percent) and requiring utilities to produce at least 20 percent of their electricity from wind, solar or other renewable sources (72 percent). 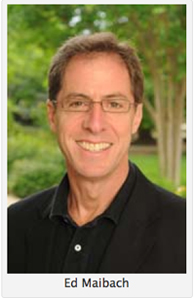 By contrast, only 53 percent supported cap-and-trade, which was described like this:

Create a new national market that allows companies to buy and sell the right to emit the greenhouse gases said to cause global warming. The federal government would set a national cap on emissions. Each company would then purchase the right to emit a portion of this total amount. If a company then emitted more than its portion, it would have to buy more emission rights from other companies or pay large fines.

No wonder it's a tough sell. Worse, only 33 percent of those interviewed supported a 25-cent increase in the gasoline tax, even with revenues returned to taxpayers in the form of lower federal income taxes -- a simple and effective way to encourage both less driving and more fuel-efficient cars.

So how should we talk about climate change? Maybe by talking about energy instead, Ed suggests. Government actions aimed at saving energy -- which have the added benefit of making our economy more efficient -- enjoy strong support.

"Dick Cheney was distinctly out of step when he said that conservation is a personal virtue," Ed says. Efficiency a surprisingly popular public policy. "The actions that will really make a difference -- reducing our energy use -- there isn't much controversy about that." No wonder the cash for clunkers program was such a hit.

"The economy and energy have more salience and presence than the environment or global warming or the phrase climate change -- which is very abstract," Ed says. "It doesn't mean much to people and it has no emotional resonance."

Language matters. So Ed suggests that those who care about the climate change get away from descriptors like "greenhouse gas emissions" or "GHGs" or "CO2" and instead go with "heat-trapping pollutants," a phrase that White House science adviser John Holdren has used.

"It's concrete, it's easy to understand and it's accurate," he says.