The twin cities of Minneapolis and St. Paul rule green sports, whether at the US Bank Stadium (Minnesota Vikings), the University of Minnesota’s TCF Bank Stadium or CHS Field (St. Paul Saints). But there's even more on the menu when it comes to the sustainability of food at the Target Center, home of the NBA's Timberwolves.

David Fhima is the groundbreaking owner and chef behind the tasty, clean, healthy French-Mediterranean menus at one of Minneapolis’ finest restaurants, Fhima’s Minneapolis. And since 2016, he has brought that same culinary excellence to the Minneapolis Target Center as "nutritional curator" for the Timberwolves and WNBA’s Lynx. In this conversation, Fhima shares more about his culinary philosophy, his journey to Minneapolis and his approach to his work with the teams.

Lew Blaustein: David, this story promises to be as good as a meal at one of the restaurants inside Target Center, so let’s dig in. How did you end up as the Timberwolves' chef?

David Fhima: Well, I was born in Casablanca, one of 17 children, but grew up and went to schools all over the world; from Paris to London to Geneva to Strasbourg. This influenced me greatly. I was always fascinated by food and was cooking from a very young age in my mother’s kitchen and before I knew it, it became my life’s work.

I came to the United States in 1982, found my way to Los Angeles where I worked at some of the top restaurants prior to moving to Minneapolis following a former relationship. Seeing the need for a food scene in the Twin Cities, I opened my first restaurant here in 1993, Minneapolis Cafe.

I found myself questioning why arena food was average at best when it didn’t have to be.

Over the years, Timberwolves players and management would come to my restaurants. They enjoyed the food and the ambiance, and we became friends. Several years ago, Timberwolves management approached me, namely Ryan Tanke and Ethan Casson, about upgrading the Twolves and Lynx food and beverage experience at Target Center, as major renovations to the arena were planned.

Previously, I had traveled with the team on a few road trips experiencing other venues. I found myself questioning why arena food was average at best when it didn’t have to be. I knew I could do it better, do it right. I was convinced that this would be an awesome undertaking when I realized that Ethan’s and Ryan’s standards were very aligned with mine. They were not about smoke and mirrors, but instead about quality, great ingredients and more importantly giving me the autonomy to create. Much of the credit is due to them and the organization as a whole. The Wolves and Lynx are world class organizations constantly searching how to be the best in every aspect.

Blaustein: What do you mean when you talk about "doing it right"? What is your culinary philosophy?

Fhima: My simple philosophy is this: Respect the ingredients.

It won’t be good if it’s full of additives and if the sources are suspect. Food needs to be clean. If you can buy local, great. Green and organic is great, but clean, to me, is a culmination of local first, organic second, sustainable third.

This is basic stuff, and, as I like to say, the art of doing simple, well, is a lost art.

With that as our philosophy, the trick was to change an entire arena and we couldn’t switch overnight. We’re not feeding 100 or 200 people, we’re feeding 19,000. We did, however, progress quicker than anticipated, becoming more local and sustainable, while always setting our goals higher. Among our successes are that all concession stands emphasize clean ingredients. Fhima’s concession stand is all organic; the rest are getting there. Target Center is one of the only sports arenas in North America that can say this.

Levy Restaurants, the concessionaire representing Target Center, does most of the purchasing for the concessions stands and they are doing it in partnership with us, with our clean philosophy in mind. We have a weekly meeting where we discuss many things including product quality and guest experience.

How many microwaves do you think we have at Target Center?

Blaustein: I have no idea…

Blaustein: I should’ve guessed. Talk about what makes the Target Center restaurants and concession stands so sustainable, so healthy.

Fhima: With no microwaves, everything is prepared day of. In the restaurants, we only cook with rice bran oil — it has no trans fats and there’s no waste with it. We partner with local farmers for our produce and our meats. All of our fish is sustainably caught and raised. We’re working to eliminate plastic straws throughout the arena. At the concession stands, how about making hot dogs without nitrates? Done. Healthier ketchup? Done.

Fans who used to eat out before the game changed their habits by eating at our Target Center restaurants.

Next year, we’ll be pushing the envelope even further, working with local farmers who grow produce like lettuce and tomatoes hydroponically — in a water-based, nutrient-rich, soil-less environment. This can be done indoors, when it’s minus 30 degrees Fahrenheit outside. Which, if you haven’t heard, happens here from time to time.

Blaustein: I’ve heard. Did the move to healthy and local cost significantly more? If so, have those cost increases been passed on to fans? What has been the reaction?

Fhima: Through this "go local, organic, clean" process we have not needed to raise pricing. We have stayed competitive, if not less expensive than other large stadiums in the area.

Blaustein: That’s a big deal. I’ve heard many chefs emphasize healthy and organic food. I haven’t heard them use the word "clean" before when talking about food. But it’s a big thing with you…

Fhima: Look, the pollution of our food over the last 100 or so years is a big problem. It is baked in now, meaning our soil is polluted. Even if you don’t use pesticides or herbicides, the runoff is a real problem. As you might imagine, evaporation and precipitation is hard to control.

And you know what? Peoples’ palates have been hurt by this. Pollution and now climate change affects everything when it comes to food and taste. That’s why the goal of 100 percent clean is very arduous. Although we’re not there yet,  we’re not afraid of the clean food challenge. And when your palate gets used to eating clean, it’s like a great relationship. Once you have the right one, you don’t look anywhere else. It’s been a battle but we have some of the cleanest, healthiest, best food in town. We pride ourselves on being the best place to eat, period. Not just the best sports venue.

Blaustein: What are some of the items you’re most proud of at the concession stands and in the restaurants in the premium seating areas?

Fhima: Well, that’s like choosing a favorite child, which I cannot and won’t do. I am proud of most things in each area of our arena. I love that our sub-contractors are happy, making money and feel pride being at the Target Center. I am proud of the way everyone has bought into our vision of being the best in every level. I am proud at the methodical change that we have made from top to bottom and the commitment the Wolves have to getting better each year and not resting on our laurels. Our premium restaurants were packed last season. Fans who used to eat out before the game changed their habits by eating at our Target Center restaurants. Most people used to have dinner somewhere before going to the game because the quality wasn’t there. We’ve changed that model. Our premium restaurants were packed last season.

Blaustein: How have Timberwolves and Lynx management reacted to your approach?

Fhima: From top to bottom the whole organization, from the top executives — Ethan Casson, Ryan Tanke, Ted Johnson, Jake Vernon — to the sales advisers, it has been amazing. They love it. We cook for both the Wolves and the Lynx and they love it too. No one has said no to us. We work very well with Levy, which manages the restaurants and concession stands. Also, I don’t know if this is significant, but the Timberwolves had a very good home record eating our clean, healthy food. On the road? Not so good. Speaking of on the road, other sports venues have expressed interest in our way of doing things. The organization as a whole has been 110 percent on board and committed to our culinary vision. 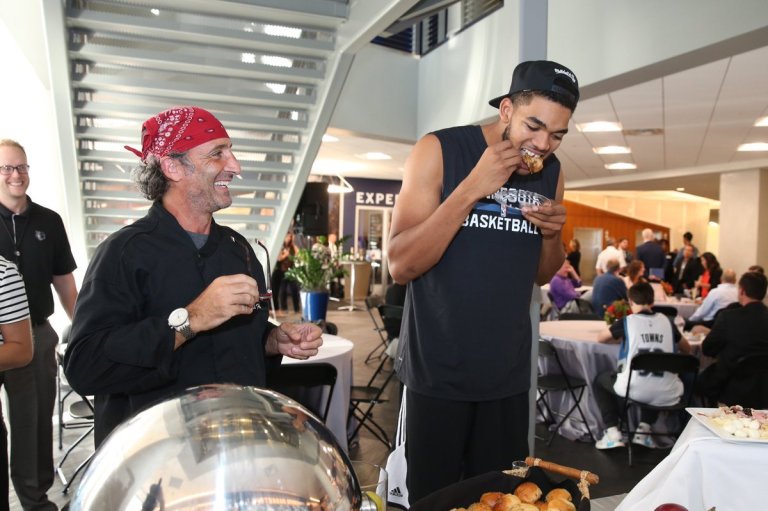 Blaustein: That’s a new link between home cooking and home court advantage. The analytics folks need to look into that. More athletes are eating vegetarian or vegan diets. Where are you guys on plant-based options?

Fhima: Every concession stand, every restaurant at Target Center, anywhere you get food in the building, has vegan and/or vegetarian options. At some of the stands you’ll find our house-made veggie burgers, they’re as good or better than what’s on the market. More and more, our players, especially the Lynx, have been asking for plant-based options. We have an amazing relationship with the players, trainers and coaches. Communication is key and we are in contact every day. Each group appreciates our contribution. A key part of the effort to win, we strive to do our part in creating meals for optimal performance. We aren’t just putting food on tables; we do our due diligence in sports nutrition research and work with players individually when asked.

Blaustein: That’s great to hear. So take out your crystal ball. Where would you like to see the Target Center food offerings three, four years down the road?

Fhima: in my view, Target Center is already a world leader in providing clean, healthy, food that maintains its savory component. We want to be 100 percent clean; we don’t believe that is too lofty of a goal. I challenge you to find an arena currently that is as comprehensive and thoughtful from the guest to the staff to the athletes. Three, four years down the road, arenas will be following suit and asking for guidance. We are ahead of the game, providing an improved all around culinary experience. We will be known in the industry for being the thought and clean cuisine leader.