How Taylor Farms is sowing the seeds for energy independence

This article is drawn from the Energy Weekly newsletter from GreenBiz, running Thursdays.

The not-so-little dirty secret of many "cleaner" cogeneration technologies available to companies today (cleaner than coal or diesel, that is) is that they’re powered by natural gas.

Increasingly, I’m hearing about installations where renewables coexist with cogen, and I suspect that will happen more frequently as more businesses start seeking to shrink the carbon footprint of their thermal energy loads.

Case in point: the hybrid microgrid powering the Taylor Farms processing plant in Gonzalez, California. Installed in December 2016, the site supports a 1.85-megawatt wind turbine, a 1-MW solar array and a 2.3-MW system called the Clean Power Station, designed by Concentric Power. The latter handles about 64 percent of the plant’s power consumption — and it uses waste heat to provide refrigeration. (The microgrid software that manages how the intermittent and "firm" loads interact also comes from Concentric.)

One of the key differentiating factors in using cogen is that it provides us firm power.

"One of the key differentiating factors in using cogen is that it provides us firm power," notes Taylor Farms CEO and chairman Bruce Taylor, in response to my questions about the rationale for this investment. "It also allows us to do load-following where we can run the cogen at the minimal amount necessary to produce only the energy required at a given time. Both of these features help to reduce our environmental impacts and move the needle to a more sustainable energy future." To be specific, the system helps the organization avoid about 10,237 metric tons of carbon dioxide emissions annually.

Purists will question why Taylor Farms, the world’s largest processor of fresh cut vegetables, didn’t hold out for batteries. Indeed, the food company is evaluating energy storage technologies as a resource at multiple locations. It has four additional rooftop solar arrays in Texas, Tennessee and California that generate about 8.4 million kilowatt-hours of electricity annually; and it uses a fuel cell at its facility in Salinas.

Meanwhile, it figures that using its own natural gas-powered equipment is about 20 percent cleaner than the existing utility grid in its locations. "We will continue to search for and invest in innovative solutions surrounding renewable and alternative energy production to minimize our impact and streamline our energy efficiency," Taylor wrote. 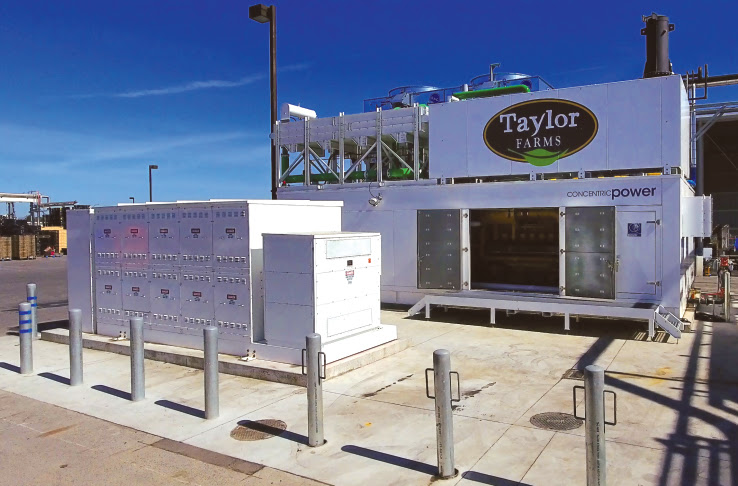 The company behind the technology that Taylor Farms settled on for Gonzalez, Concentric Power, was founded by Brian Curtis, a Salinas native who spent the formative years of his career as a refinery engineer for Chevron. Before founding Concentric in 2011, he worked for several years with the U.S. Department of Energy, within the Energy Efficiency and Renewable Energy Group.

Concentric is focused on helping process-intensive facilities — chiefly in the food, pharmaceuticals and data center sectors — transition portions of their energy loads to more efficient and less carbon-intensive power sources. Back in February, it announced a $100 million financing program to support cogen and microgrid projects that over the next two years. "Every deal that we get into will have a long-time service or asset management component to it, so you can transition components," Curtis told me when we chatted about the Taylor Farms installation.

That means, for example, that when Concentric’s technology is updated to handle biogas (a future direction) that customers could swap to those sources relatively smoothly. "We wanted to focus on technology that is ready to go now but doesn’t paint us into a corner," Curtis said.