When I mention the words “high-rise office building” what do you think of? Probably an enclosed glass and steel box, stripped of detail, perfect in its photogenic, modernist simplicity.

Perhaps, like me, you also imagine its occupants: hunched at their desks, panting for fresh air and light, mesmerized by the hum of overhead fluorescent fixtures gone buggy. In fact, our cultural understanding of “high-rise” seems to include its occupants being divorced from their natural surroundings, sequestered in a technologically advanced, artificial environment.

A lot of us have been wondering just how advanced our current model really is.

Mick Pearce is an African architect who has tried to change that model, demonstrating his ideas in two signature buildings, the Eastgate Building in Harare, Zimbabwe, and the Council House 2 Building in Melbourne, Australia. Both buildings employ common-sense passive systems for climate control based on gradients, and both were inspired by the work of a tiny insect, the termite.

The termite is one of nature's more accomplished builders, erecting the tallest structures on our planet (when measured against the size of the builder), and maintaining a constant temperature inside despite wide temperature swings outside.

The mounds that they build are extremely durable structures of mud, often employing sophisticated buttressing and, in the case of so-called compass mounds, a precise shape and siting that optimize the effects of the sun.

The compass mounds of Australia are shaped like large blades, narrow at the top and gently curved to a narrow boat-shaped footprint. They get their name from their consistent north-south orientation, and it is this orientation and shape that allow them to optimize their environment. When the sun angle is low and temperatures are chilly the mound receives the maximum exposure to its flanks and gains heat needed to warm the nest. When the sun is overhead, in the heat of the day, the narrow blade edge receives very little sunlight and unwanted heat gain. Shape saves energy, again, in the natural world.

What impressed Mr. Pearce about the local African mounds was the climate control. Despite a daily fluctuation from 40 degrees C to less than 0 degrees C, the termites are able to maintain a constant inside temperature of 30 degrees C.

Within thick, insulating walls they accomplish this by creating and constantly maintaining a draft of air from low openings to top holes. They make use of the so-called stack effect, convective airflow from cool to warm. The termites are constantly tweaking these openings for optimum performance, sometimes adding wet mud that aids cooling with its evaporative effects. 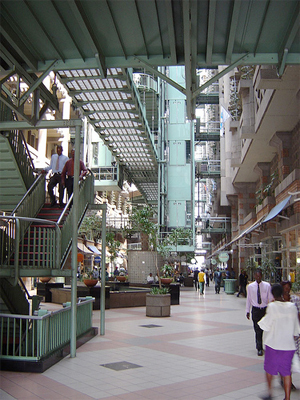 This is a classic example of surfing for free on a gradient, discussed in my last two essays, and the termites' lesson was not lost on Mr. Pearce. When the developers of the Eastgate office building asked him to design a structure with a passive climate control system in 1996, he employed some of these principles. The complex is actually two buildings that shelter an interior atrium (right). Heat gain is reduced by limited glazing, deep overhangs, and building mass, and the architect took advantage of night cooling, thermal storage and convective air currents to moderate temperatures.

During the day the heavy building mass and rock storage in the basement absorb the heat of the environment and human activity. At night, cool air is allowed into the bottom of the building and starts the convective flow that vents the hot daytime air through roof vents. This cool air is also stored and then distributed the next day into offices via hollow floors and baseboard vents.

These passive techniques, although not able to supply all of the climate control for the building, contributed to some impressive building conservation statistics. The approximately 32,000 square meter building was built with 10 percent of the typical ventilation costs for the area, 35 percent less energy costs, and 10 percent fewer typical capital costs, translating to a savings of $3.5 million for a $36 million building.

Ten years later, Mr. Pearce had perfected some of the principles tried at Eastgate, this time in a more contained, 10 story, 12,500 square meter building in Melbourne, Council House 2 (CH2). The use of gradients is also key to this design. Like Eastgate, CH2 is cooled by a timely management of the difference in temperature between night air and day air. In this case, a whole side of the building is opened up to direct air intake through automatic shutters made from recycled wood (left).

This “night purge” vents the warmer air directly from the office and shop spaces and cools down the overhead mass of concrete. The warm air rises up to openings in the ceiling and then travels through hollow floors to a vertical shaft and eventually to roof vents. This passive treatment alone is enough to keep the spaces comfortable for a part of the day. Cooled fresh air rises up through floor registers throughout the day.

CH2 also uses another temperature gradient of a fluid, water, to condition the air in the building. First, water is “mined” from the sewage supply of the city, triple filtered and then put to work flushing toilets, watering plants and conditioning the air. The AC water is run down the outside of the structure through five 15-meter “shower towers” (below) which create evaporatively cooled air for induction into the lower commercial spaces. 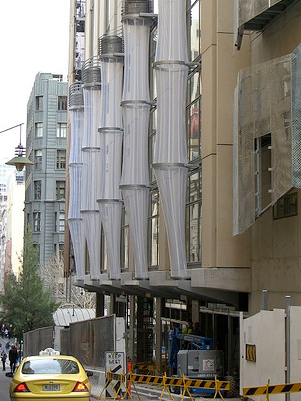 The remaining water is piped into basement storage where it is cooled through a phase change apparatus and distributed when needed. The phase change apparatus is made up of 10,000 stainless steel spheres containing salts with a high freezing point (15 degrees C) which are frozen at night and then used to chill the water for distribution during the day, much like ice cubes chill your drink as they melt. This newly cooled water is pumped from the basement to chilled beams at every level of the building. These beams are arrayed copper pipes that drop cool air down later in the day when the effects of the night purge have worn off.

This building also uses thermal mass to absorb heat, reduces heat gain by a strategic placement of glazing, and produces power and heat by photovoltaic and thermal solar panels and a gas-fired cogeneration plant. It also hosts an equivalent amount of plant leaf surface to the site (to replace what theoretically was lost by development of the land), which oxygenates the air indoors and out. The building receives a fresh air change every half hour, and the owner claims a 10.9 percent improvement in worker productivity as the biggest payback from the  $11 million (Australian) ventilation system. This increased productivity is calculated to be worth over $2 million (Australian) a year in staff time and means that the investment will likely pay for itself in 5-6 years. What a difference a difference makes!

While one architect's successful use of gradients inspired by nature is the main theme to this essay I believe there are more building lessons to be learned from the termites. These fascinating creatures don't build these mounds alone, or use any forethought, and they certainly don't understand the methods they are using. They take humble materials, however, and build 25-foot high structures that require a stick of dynamite to remove. Moreover, they maintain precise living conditions for millions of inhabitants in a complex and ordered society. They do this with brains the size of a pinhead. This is the power of the super organism, of which I will write next time.