Located just 13 miles off the coast of Rhode Island, and just 14 miles east of Long Island’s Montauk Point, Block Island (pop. ~1,000) has been called one of the last great places in the Western Hemisphere.

The island boasts 17 miles of beaches, 365 freshwater ponds, 250-foot bluffs and 150 bird species. Now the island is about to become well known for another reason — it soon will be home to the first offshore wind farm in the United States.

The high price of island living

So many people want to enjoy the beauty of Block Island, the population rises from 1,000 year-round residents to 15,000–20,000 people in the summer. However, the beauty and seclusion come at a price.

Residents pay some of the highest electricity retail prices in the nation, up to $0.50 per kWh in the summer months.

Block Island Power Company (BIPCo) provides electricity to the island’s residents with diesel — about 1 million gallons (PDF) each year — which is shipped to the island by boat. And electrical retail prices fluctuate depending on the price of that diesel (for example, in the past year prices ranged from $0.37 to $0.58 per kWh, while folks on mainland Rhode Island pay an average $0.14). 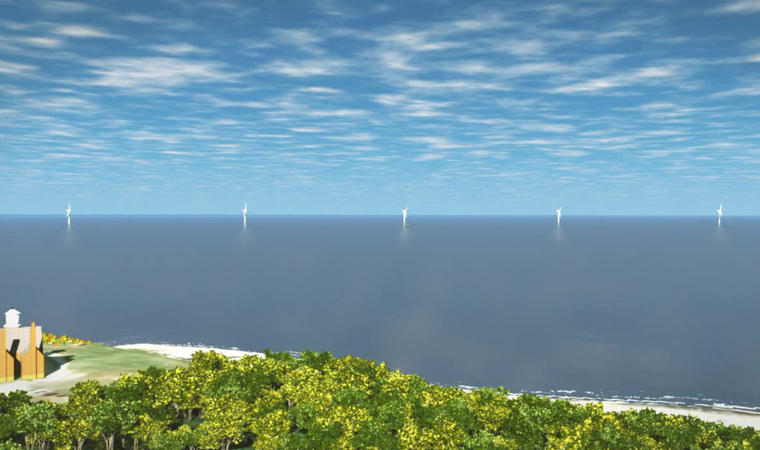 The economics are one of the main reasons wind was chosen.

“Block Island had a lot of choices (PDF) to get off of the expensive imported diesel. They could have switched to propane gensets or compressed natural gas,” said Chris Burgess, operations manager for the Ten Island Challenge, a program of Rocky Mountain Institute and Carbon War Room. “But they decided to go with renewables for a couple of reasons. One, it met the island’s ethical code of wanting to protect the environment, and two, it’s cost effective.”

To wit, Deepwater is predicted to reduce residents’ utility bills by 40 percent and lower carbon dioxide emissions by 40,000 tons annually.

Connecting to the mainland grid

Deepwater Wind will be selling its electricity through a power purchase agreement (PPA) to National Grid, an international company based in the U.K. and the U.S. Northeast with 3.4 million customers in Massachusetts, New York and Rhode Island.

BIPCo will continue to own and operate the electricity infrastructure on the island but will buy the wind power from National Grid for its customers. The wind power will flow directly from the wind farm to the island, and then — as Block Island uses only 1 MW of power during off-season and 4 MW of power during their summer peak season — the excess power (90 percent of the power produced) will be sent to National Grid’s mainland customers on Rhode Island.

A cable buried 6 feet under the ocean floor will link the wind farm and Block Island to the mainland. Thus Block Island has no need for storage, and no need for backup diesel generators, as it can purchase electricity from National Grid once the cable is laid.

Block Island had considered installing its own cable to the mainland, but at a cost of almost $40 million, it actually would not have reduced electric retail prices, as ratepayers would be footing the bill for the cable. Now that Block Island gets to use the Deepwater cable, the island only has to pay a fraction of the cost.

It’s a win-win situation, as not only does the island rid itself of diesel dependence, but also the U.S. gets its first offshore wind farm.

Wind projects face many challenges, one of which is community objections based on issues — some perceived, some subjective, some legitimate — including noise, aesthetics, bird migration or other issues.

Up until now, other proposed offshore wind farms in the U.S. Northeast have failed because of opposition from Martha’s Vineyard and Cape Cod residents disturbed by the impact on their ocean viewshed.

One of the most important things Deepwater Wind did to move the project forward was to involve the entire community of Block Island and National Grid’s Rhode Island customers from the beginning.

For example, people were concerned construction would disrupt the migration of the North Atlantic right whales. So Deepwater Wind put together a partnership with environmental groups and voluntarily imposed additional restrictions on construction activities, beyond the federal guidelines.

“Being engaged and active in both Block Island and mainland Rhode Island gave us the ability to take a group of stakeholders with legitimate concerns, bring them into the process, answer their questions and address their concerns,” said Clint Plummer, vice president of development at Deepwater Wind.

Another big hurdle was getting the right regulatory market environment. Rhode Island had to pass new legislation to allow Deepwater Wind to sell power to National Grid.

“It was critical to have a partner in government,” said Plummer, “having a state that recognizes it needs to be on the forefront of creating innovative policy mechanisms.”

The third big challenge was pulling together a global supply chain. Currently no manufacturers of offshore wind turbine parts are in the U.S. So the turbine foundations are being built in Rhode Island and Louisiana, the turbines in Europe and the cable in Korea.

However, according to Plummer, “as the industry grows and develops there will be opportunity to create a local supply chain, creating more local jobs and lowering costs.”

While financing for renewable energy projects on small islands is often difficult, Deepwater Wind has fully financed the wind farm to a tune of $290 million through underwriters Societe Generale of Paris, France, and KeyBank National Association of Cleveland, Ohio.

Obtaining financing for renewable energy projects is highly dependent on the credit rating of the off-taker. In the Block Island case, the off-taker is mainland utility company National Grid. Financing also was easier because it’s a relatively small project as far as offshore wind projects go.

“By being able to start with this small project, we could finance it with only two or three banks,” said Plummer. “There was a lot of interest from lenders because they recognized it was a good project, and we were able to pull together a financing plan that both we and our lenders are happy with.”

Similar to Block Island, islands around the world face high electricity costs and a reliance on imported fuels. RMI and Carbon War Room are working with islands in the Caribbean to help transition them off their heavy dependence on fossil fuels to renewable resources.

“There are a lot of operational challenges in getting a wind project built on a small island,” said Kate Hawley, a senior associate at RMI. “One of the reasons islands are so fascinating is that the second you put in renewables, you’re at high penetration. This impacts operational standards, protocols and guidelines. On Block Island, tying into the main grid reduces the risk for operational challenges.”

Yet Block Island, being the first in the nation, can be a great learning tool for the U.S. wind industry.

“Just as the Danes tiptoed into offshore wind by doing a wind farm very close to shore, Block Island is the offshore tiptoe for the U.S.,” said Burgess. “Now the Danes have offshore wind all over the Baltic Sea, up to 40 miles offshore. Block Island can provide us lessons that open up a whole new world of wind power.”

The U.S. Department of Energy estimates that shallow waters along the eastern seaboard could host 530,000 megawatts of wind power, more than 40 percent of current U.S. electricity generation.

The U.S. East Coast is also at the end of the pipeline for natural gas, which competes for both winter heating and year-round electricity generation. This is seen in the rising retail electricity prices in New England and severe spikes in the operating costs for generators, which reached astronomical numbers during recent winters’ polar vortices. Offshore wind can alleviate that pinch, and it’s starting with the Block Island wind farm.

“On Block Island we have shown that we can shut down an antiquated, expensive, dirty generator and replace it with clean renewables, with high levels of public support,” said Plummer. “As old fossil-fueled power plants get to the end of their life and need to be replaced in other areas of the eastern seaboard, offshore wind can provide cost-effective power.”