How an urban school's gardening project healed a community

Teacher Stephen Ritz transformed a school's lunch program by getting kids involved in community gardening — as well as nurturing their hearts and minds.

The following is an edited excerpt is reprinted from "The Power of a Plant" by Stephen Ritz. Copyright 2017 by Stephen Ritz. By permission of Rodale Books. Available wherever books are sold.

Editor's introduction: "The Power of a Plant" is the inspiring story about how teacher Stephen Ritz incorporated gardening and plants into the curriculum in his South Bronx school, moving the graduation rate of students from 17 percent to 100 percent and improved attendance to 93 percent.

After years of working with adolescents who had to be coaxed and cajoled into learning, in this new setting I was surrounded by little children who got excited if you offered them a smile and a handshake. They practically ran into class to find out what Mr. Farmer Steve was up to each day. They expected excitement. Equally exciting for me, I got to be the oldest sixth grader in the Bronx in a school that only went up to the fifth grade. I may have acted like a big kid, but I could do long division in my head. I had a driver’s license. And now I had my own master key to the building.

Our first task: Build our classroom farm. "This is a big project," I explained to the wide-eyed students. "I’m going to need everyone’s help to put all these pieces together." Just as I had seen with older students at JVL, these little guys quickly found ways to contribute. Some sorted pieces, some assembled, and together we managed to get six Tower Gardens ready to plant. 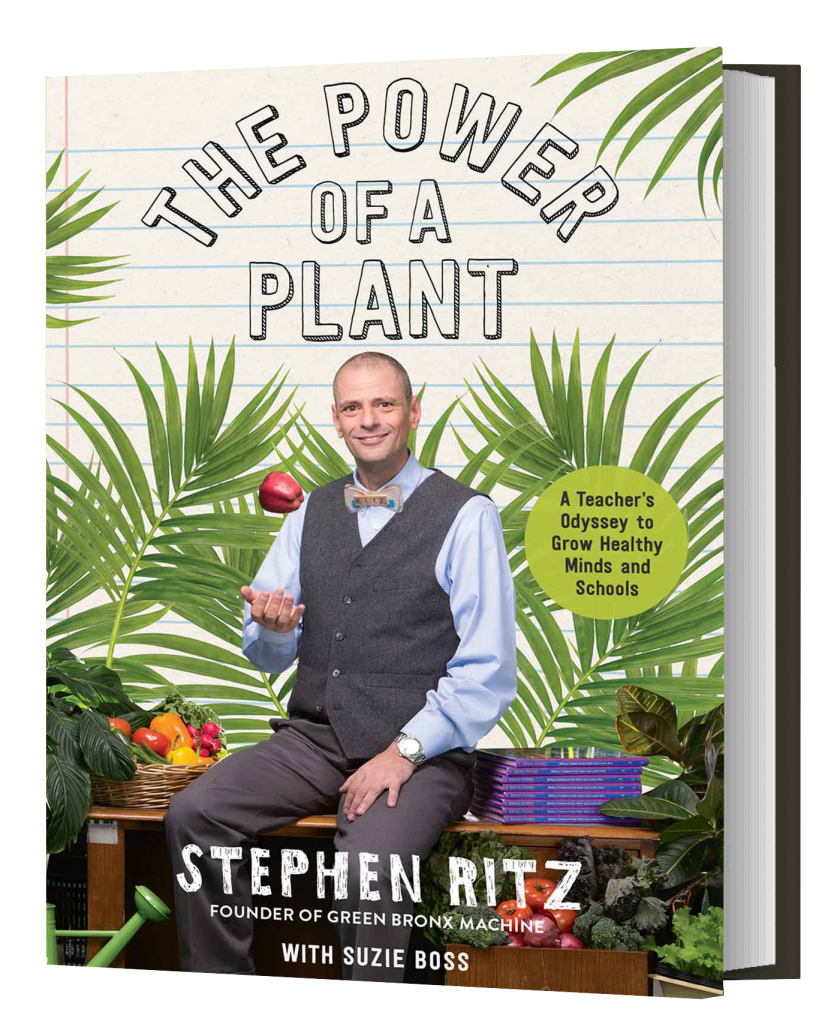 "Now we’re going to do something even bigger," I promised them. "We’re going to create life." Little farmers eagerly pushed seeds into seedbeds and waited patiently for them to germinate under grow lights. While they waited, we learned about making predictions, fractions and calculating percentages. Once the seeds sprouted into seedlings, we transplanted them into our towers.

Every day, there was a detailed lesson plan behind each adventure, carefully mapped to academic learning goals. Sometimes I crafted those lesson plans with other teachers, helping them with curriculum design. Some days, I modeled lessons while teachers observed. Other times, I’d be the one observing and coaching teachers on their craft. Every day was another chance for learning to happen across the curriculum and throughout the building.

More and more adventures unfolded almost daily. I ordered 1,000 butterfly cocoons for our future butterfly garden and delivered a batch to each classroom to observe. "Butterfly delivery!" I would sing out when I walked into the room.

I ordered worms for our outdoor garden boxes and recruited a team of willing volunteers — led by the enthusiastic student I nicknamed Worm Girl — to care for them.

I started recruiting little engineers to test-drive spin bikes that I planned to use to power blenders for making smoothies.

When I noticed that children with attention challenges seemed to get calmer around our indoor farm, I invited them to come read to the plants. This generated important information to improve instruction. Students who struggle with reading typically hate to read aloud in class. That makes it hard to know why they’re struggling. But the same students love reading to plants. While they read, I listened — and planned instructional moves accordingly.

Excitement spread from room to room as children — and teachers and even parents — wondered what in the world Mr. Ritz was up to next. I even kept a hidden stash of big plants. When students did a great job on a lesson, I would swap little plants for big ones and give my little farmers all the credit. "Look how the plants responded," I’d tell them after recess. "You’re really helping them grow." And best of all, they believed me and came back to work even harder.

Our wellness center wasn’t fully built yet, but it was already generating plenty of active learning and a positive, playful culture. When one of the boys called me Father Nature, the nickname stuck. When I praised the students for being science geeks, they responded with chants of "Geeks! Geeks! Geeks!" and "Nerd Power!"

Before we knew it, our little classroom farm was producing enough lettuce to supply salads for a weekly "lunch and learn" with the principal. Torres and a handful of children would arrive in my fourth-floor room each Friday. Many of those invited for these special events were the same children who used to be sent to the principal’s office for getting into trouble. Now they were welcoming the principal to be their lunch guest and talk about things worth knowing. Passion, purpose and hope were getting infused into the school culture.

"You know, people are starting to think differently about the children at this school," Torres told them. "We think you’re going to do things that nobody expected of you."

"Like go to a great school like the Bronx High School of Science," the principal replied. "Who’s ever heard of that school?"

Students became scholars and sketched everything to help them understand the life cycle of plants.

Only a couple hands went up, but I quickly reminded students that they already knew a graduate of our borough’s most esteemed secondary school. "Remember when you met my daughter, Michaela?" Heads nodded and smiles flashed across several faces. By now, Michaela was in college but still took part in Green Bronx Machine adventures when she was home on breaks. "That was her high school." In a community where only a small fraction of parents had completed high school, our children needed relatable role models to inspire their academic futures.

What else did they want to talk about? Health was a favorite topic. When I told them that I used to be fat — a full 100 pounds heavier — they didn’t believe me. I had to bring out photos and the XXL T-shirts that looked big enough to clothe two of me. That was good for laughs, but my example got us talking about the choices we all make about food, including the sugar in our diets and how our tastes are shaped by advertising.

"We hope that what you’re learning here about being healthier, you’ll teach your families at home," Torres told them. That prompted several students to talk about making dinner salads with the fresh produce that we were sending home to families each week.

Older students who had been attending this school for several years were quick to notice the changes happening all around them. From the addition of a salad bar in the cafeteria to the new features in my classroom, they noticed what was new — and wondered what was next.

"You guys have a lot of good ideas," I told them. "I bet some of your classmates do, too." That got heads nodding. "Principal Torres, what would you think of putting up some suggestion boxes?"

Not only did he support that idea, but he encouraged students to use their voice in other ways to help the school. That led to the launch of our first student government and a school-wide election to choose officers.

Whether it was over a shared lunch or a lesson in a classroom farm, food gave us a natural entry point for learning about all kinds of things that mattered. At CS 55, 100 percent of students are on free and reduced lunch. Across the community, 37.9 percent of residents are food insecure, lacking reliable access to affordable nutrition.

Hunger is the most noticeable symptom of problems that run much deeper. This borough leads the state in rates of adult diabetes, childhood diabetes, juvenile coronary disease, juvenile obesity, high blood pressure and hypertension. In a cruel irony that affects many of our families, obesity is the new face of hunger. People fill up and fill out on cheap foods that are calorie dense but nutritionally bankrupt. I call it a MESS: manufactured edible synthetic substances. This community is filled with a MESS. While some people call this community a food desert, I call it a food swamp.

Turning a 'food swamp' into an oasis

Tragically, children and parents who believe they are making good, healthy decisions are actually eating and drinking themselves fat and sick. Marketing disguises unhealthy choices as "natural" or "low-fat" (but still loaded with sugar). Fast-food outlets with 99-cent menus perch on street corners that children pass as they go to and from school.

Among all this branded and celebrity-endorsed junk, where was the "official healthy food" for children? How could we get back to healthier and simpler times? How could we make better decisions about building blocks of health? These questions ate at me.

Of course, hunger is also a symptom of joblessness and other issues.

Of course, hunger is also a symptom of joblessness and other issues. The immediate neighborhood around CS 55 has the highest rate of chronic unemployment, underemployment, second opportunity programs, homelessness, incarceration and crime rates, and children in shelters in the Bronx. A tremendous number of children are being raised by someone other than their parents or living in single-parent households. At any given moment, on any given day, in broad daylight, you will see scores of people congregating on Claremont Village sidewalks with seemingly nothing to do and nowhere to go.

Liquor, lotto and cigarettes are sold everywhere yet the community has neither a bank nor a public library. Instead, there are pawnshops and check-cashing counters on every block. Food pantries and food lines are everywhere. Despite being fully apprised of the data related to health disparities in the community, seeing it up close and daily continued to stun me and motivate me. In the heart of the hip-hop nation, looking at all these hungry people, I thought of Woody Guthrie’s famous anthem and wondered, was this land made fairly for you and me?

I wanted the school to become a place for people to congregate for all the best reasons. And for a community that has limited means and limited access to healthy fresh food, I knew we could grow and provide it all year long, with learning experiences aligned to Common Core and Next Generation Science Standards.

See all by Stephen Ritz