The brilliant Dutch painter Vincent Van Gogh once observed: "Great things are not done by impulse, but by a series of small things brought together." His sentiment, expressed in a letter to his brother, was specific to artistic inspiration but it also has very real relevance for the way in which corporate strategy unfolds.

One vivid illustration draws from the experience of the giant appliance manufacturer Whirlpool. From a management perspective, its manufacturing sites enjoy a great deal of autonomy. And for the past two years, the company's thoughtfully multidisciplinary sustainability team — representing expertise in environmental compliance, materials and regional context — has armed around 40 of them with a software dashboard from technology firm and energy management specialist Schneider Electric to keep tabs on energy usage, water consumption and waste metrics.

The idea originally was to provide the local teams with much more insight around where processes can be improved. But by stepping back and considering the data in aggregate, the team has found ways to scale its impact more quickly.

Within months of adopting the software at three plants in Ohio, for example, the team realized that all three shared a similar challenge — figuring out how to handle more than 20 million pounds of corrugated cardboard boxes used to package incoming components.

Sure, each site could have figured something out on its own. But by reconsidering the situation holistically, Whirlpool was able to negotiate new recycling arrangements that will save it at least $1 million over the next two years, according to Ron Voglewede, global sustainability director for Whirlpool. The trick was to stop thinking of the material as waste, he said, and look for business partners that would value the material differently.

"Once we were able to aggregate the data, we were able to start looking at the cardboard quite differently as a resource and say, 'Hey, look, we have the opportunity to turn around what we're doing in this one facility and replicate and scale it.' That's when executives started to listen," Voglewede said. "When you talk scale, you tend to get perked-up ears."

Since Whirlpool started investing in this tracking and insight, the results have been tangible: three of the Brazilian plants using the software to track more than 100 waste streams were able to meet their zero waste-to-landfill goals two years earlier than expected.

"In Brazil, we've been able to actually even look at how we make new products or introduce new separation techniques and invent new processes where we can do the segregation or even … add value to the material before it leaves the door," Voglewede said.

Those ideas are being translated and shared with operations in Mexico, the United States, Europe and China. And the teams at these sites have been trained in how to use the dashboards as part of their day-to-day processes.

Here are the latest goals (using 2022 as the deadline) that the Whirlpool operations team is using to guide its sustainability strategy:

Whirlpool currently runs 70 manufacturing and technology research centers globally. It plans to cover 50 locations with the Schneider Electric software, EcoStruxure, by the end of this year, he said. To be clear, this data still isn't updated on a real-time basis. In some cases, it is refreshed on a monthly basis but in most scenarios it's available much less frequently. 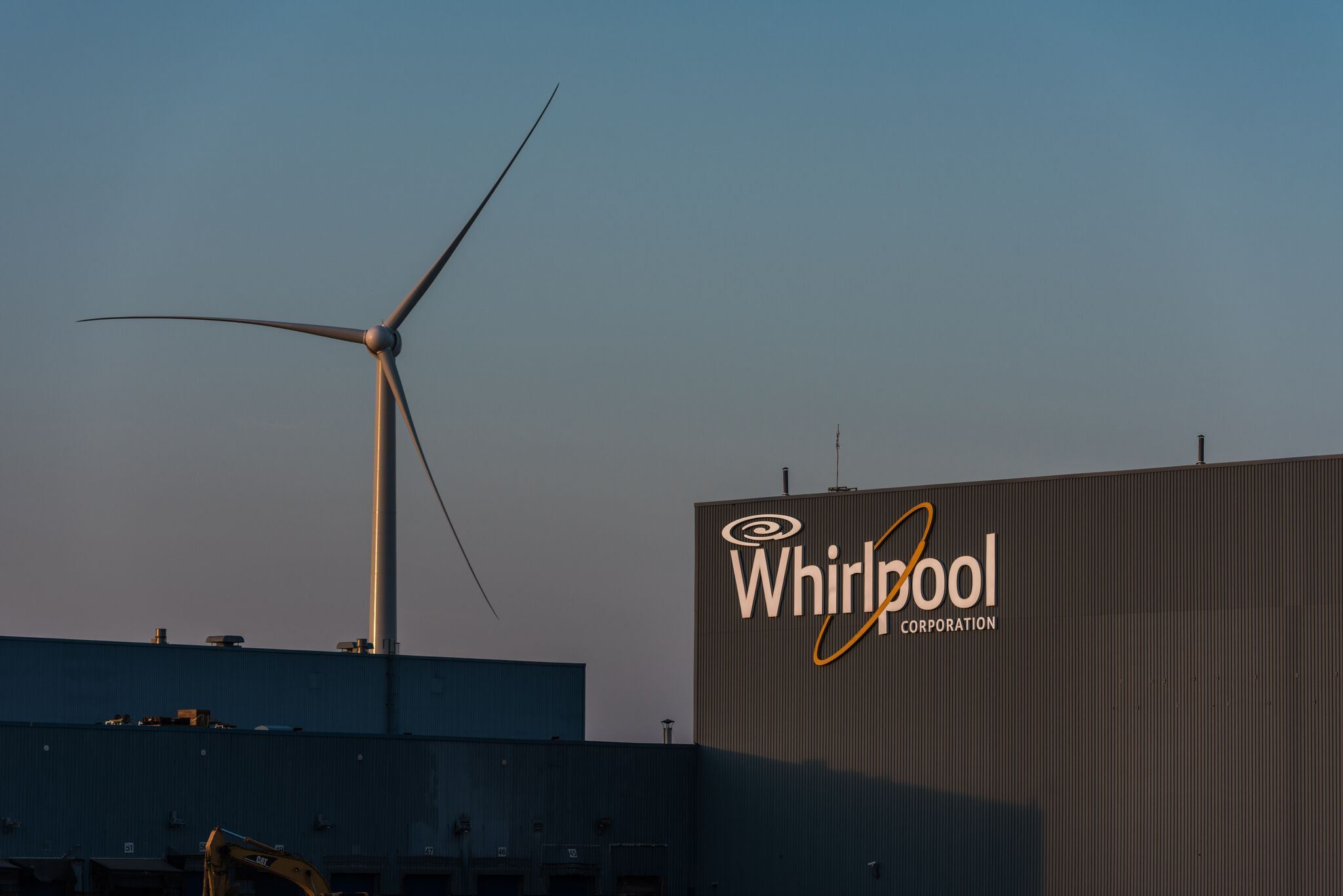 The big exception relates to energy consumption: slowly but surely, some plants are moving toward continuous monitoring, a factor that has been integral to Whirlpool's on-site renewables strategy. In late 2017, Whirlpool announced plans to build three wind turbines at its Greenville, Ohio, manufacturing site that will generate more than 12 million kilowatt-hours of power annually — partially powering the operation there. Three other sites in Ohio are using on-site wind: Whirlpool is actually one of the largest investors in this technology among the Fortune 500 set.

The company has been monitoring the business case for on-side wind and solar, as well as systems for water collection, on a regional basis "very diligently" for five years, Voglewede said. Now, it's using that data to make very strategic investments. In India and Italy, for example, Whirlpool's focus is the potential for solar. "We knew this threshold and crossover point would happen," he said.

The same sort of investment wouldn't necessarily make sense, however, in a place like Brazil where there is a higher percentage of power available on the central grid.

What advice does Voglewede have for other sustainability professionals considering a tracking system of this sort? For starters, don't talk about the cost. Position it as an investment that will come with a return — and then deliver a constant stream of examples that demonstrate its value.

"Don't try to oversell it and try to get too grandiose," Voglewede said. "But you'll have to do some of the plowing yourself and prove the point and then ramp it from there."