Whole Foods Market has been using batteries at five stores in California and Hawaii to reduce its electricity bills and cut greenhouse gas emissions. Now, the grocer is taking a closer look at how these alternative battery storage systems can cut costs and keep food cool in the event of a blackout.

"If we do not have power, we do not have a product; it doesn't take long for that product to spoil," said Aaron Daly, global energy coordinator at Whole Foods. "With changes due to climate, weather and a variety of factors, there are reasons to think we could improve on the existing scenario with storage."

At a grocery store in the Silicon Valley enclave of Los Altos, Whole Foods uses systems made by Axiom Exergy that employ frozen tanks of saltwater to store cooling energy that can keep food cool for as long as eight hours, in place of electricity — such as in cases where there's a central power outage.

Typically, the primary function of most commercial energy-storage systems is to reduce building power usage, avoid high demand charges and reduce monthly electricity bills. But companies such as Whole Foods are also evaluating different types of batteries to help integrate power from on-site solar panels into their buildings, to help them reach their sustainability goals by avoiding using fossil fuels, and to boost resilience — as is the case with the Axiom technology.

Axiom's saltwater tanks use a system called ice-on-coil that is manufactured by the air-conditioning industry. Each of the two Whole Foods tanks is filled with hundreds of yards of thin, plastic tubing that are submerged in a bath of saltwater. At night, when electricity is cheap, the tanks are recharged by sending a coolant liquid through the tubes, which generates ice around the coils. The tanks store the ice until they are needed for cooling, at which time a switch releases warm water through the tubes, melting the ice. This creates cold air for cooling. 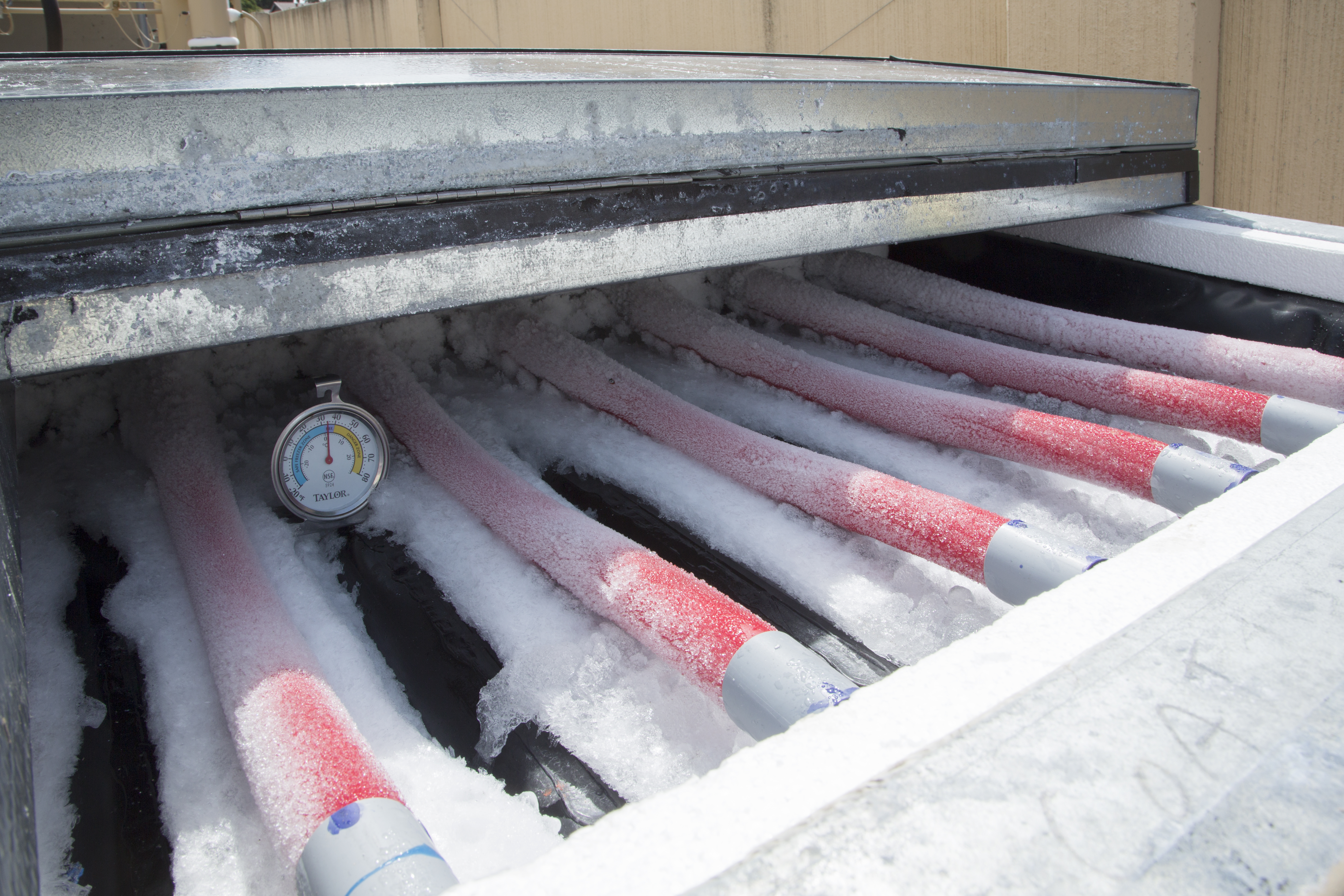 The tanks are connected to the Whole Foods refrigeration system and also to a box with a system integrator inside. The integrator is an appliance guided by advanced data analytics and computing, moving heat to and from the tanks with pumps, valves, heat exchangers and compressors.

Unlike other types of businesses, grocery stores and other companies that need to keep food cold 24 hours a day, seven days a week don’t have a lot of options to cut their power use during late afternoon and evening hours when electricity prices are high, said Amrit Robbins, chief executive of Axiom.

"To generate value, you need long-duration energy storage, you need a big gas tank," he said. "A refrigeration battery is like a Honda Odyssey, it’s big and goes forever, it’s a workhorse."

Axiom financed the battery systems, for which Whole Foods pays a monthly fee. That payment, considered alongside the lower monthly power bill for the site, amounts to less than what the grocer was paying its utility before the batteries were installed, according to the company.

Aside from the Whole Foods installations, Axiom is in the process of installing its saltwater batteries at a Walmart grocery store in Escondido, California, near San Diego.

Most commercial energy storage systems in the United States are in California, which offers generous rebates through the state's Self-Generation Incentive Program, that can equal as much as 60 percent of the cost of a system. The state also has an energy-storage mandate, which requires regulated utilities to use 1,325 megawatts of energy storage by 2020, some of which must be located at customer properties. That has created opportunities for commercial customers to try out batteries.

A refrigeration battery is like a Honda Odyssey, it’s big and goes forever, it’s a workhorse.

The overall market for commercial energy storage is still small. But analysts and technology watchers expect that more companies will opt for on-site storage technologies in the next few years, as prices fall and as companies find ways to use solar panels and storage devices to conserve energy and make their buildings more resilient in the event of a blackout.

"Commercial and industrial customers want to reduce their energy costs, they want to increase sustainability, decarbonize their energy supply, but they want to do that in a way that doesn’t require hassle," said IHS analyst Julian Jansen.

Worldwide, commercial and industrial property owners installed less than 1,000 megawatts of energy storage devices in 2017, according to research by Navigant. The research firm predicts that will grow to roughly 10,000 megawatts of new commercial energy-storage installations in 2026.