How the world can eat away at emissions

If food is the "mother of all sustainability challenges," can we stop climate change with our forks?

Environmentalists, particularly those working to protect our planet against climate change, may be surprised to learn what a huge portion of our carbon footprint comes from meat.

The latest figures from the Food and Agriculture Organization indicate that livestock accounts for 14.5 percent of all human-induced emissions. That’s more than all direct emissions from transportation including cars, planes and ships combined globally.

While the impacts of our diets largely have been overlooked in the climate change debate, a growing body of research is showing the link between diet and climate.

According to lead author Janet Ranganathan, "Food is the mother of all sustainability challenges. We are what we eat and what we eat has a profound impact on the planet. Around the world people are converging on diets high in calories, meat and dairy, with dire consequences for the health of the planet." 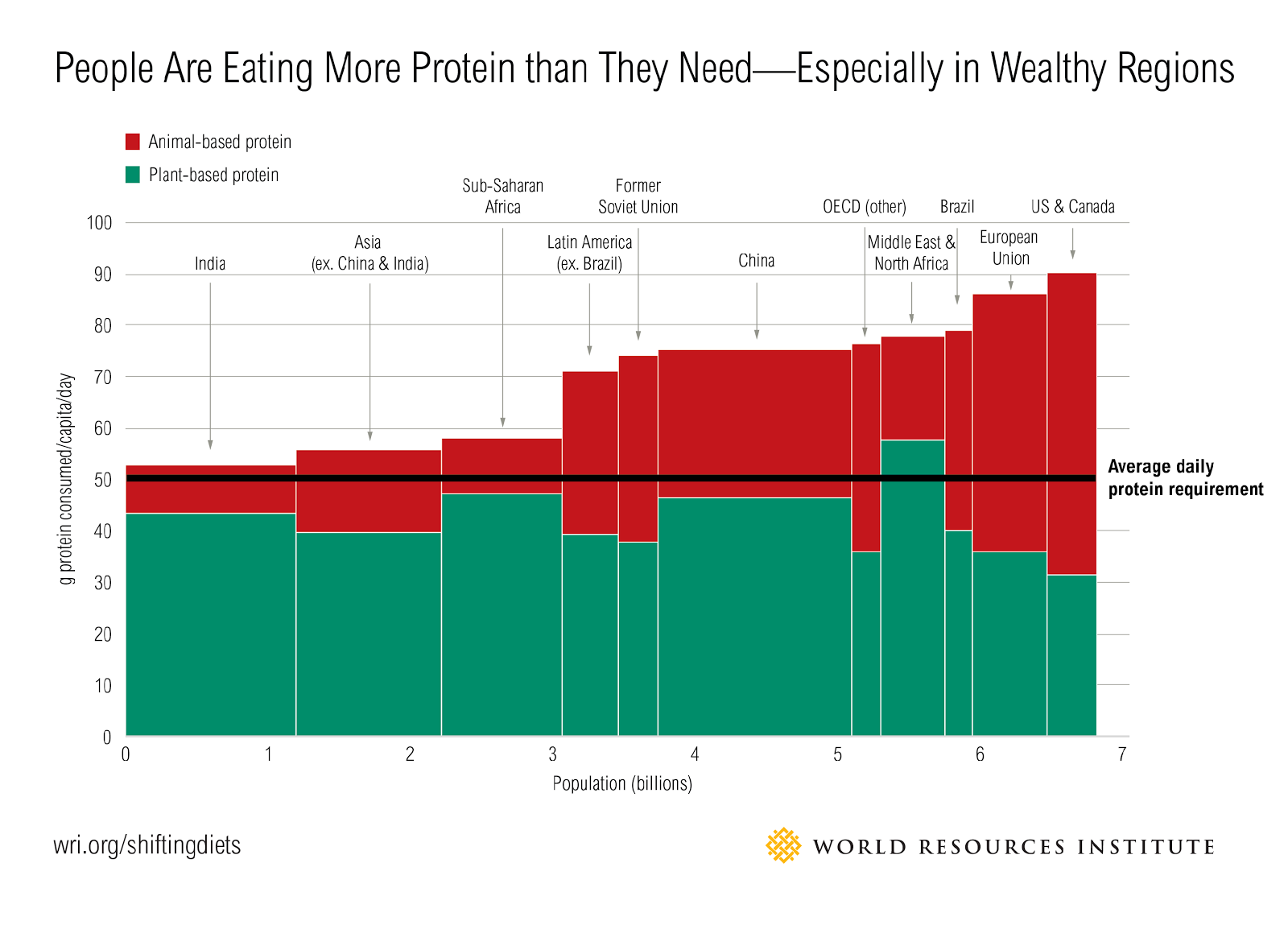 Researchers around the world have shown that various shifts in diet can lead to notable reductions in our individual dietary greenhouse gas (GHG) footprints. These range from making minor changes to going completely vegan. One U.K. study found that if average adults simply aligned their eating habits with World Health Organization dietary guidelines, they would reduce their GHG footprint by 17 percent. Another found that adopting a Mediterranean diet could generate a 30 percent reduction compared to the projected 2050 global average diet. A vegan diet may be able to reduce GHG emissions by 50 percent.

While the models vary, they all found that reductions in animal products such as beef, eggs and dairy coupled with increased fruit and vegetable consumption sizably would reduce nitrogen and GHG emissions.

Does this mean we should all become vegetarian?

Not necessarily. Small amounts of meat sometimes provide key micronutrients that can be harder to replace with vegetable protein. The issue is how much meat is consumed. According to Pierre Gerber, lead author of the FAO report "Tackling Climate Change Through Livestock," "addressing over-consumption issues where it happens is one of the entry points for reducing the impact of livestock on the environment, together with a general effort to improve production practices."

With global populations rising and a growing middle class, demand for food is growing fast. The WRI study shows how reducing current overconsumption of food is a major opportunity to reduce this environmental strain.

People in rich western nations — with the U.S. leading the way — consume more food than we need, particularly protein. It found that the agricultural land use and greenhouse gas emissions associated with the average American diet are nearly twice that of the average world diet, with 80 to 90 percent of the impacts from consumption of animal-based foods. 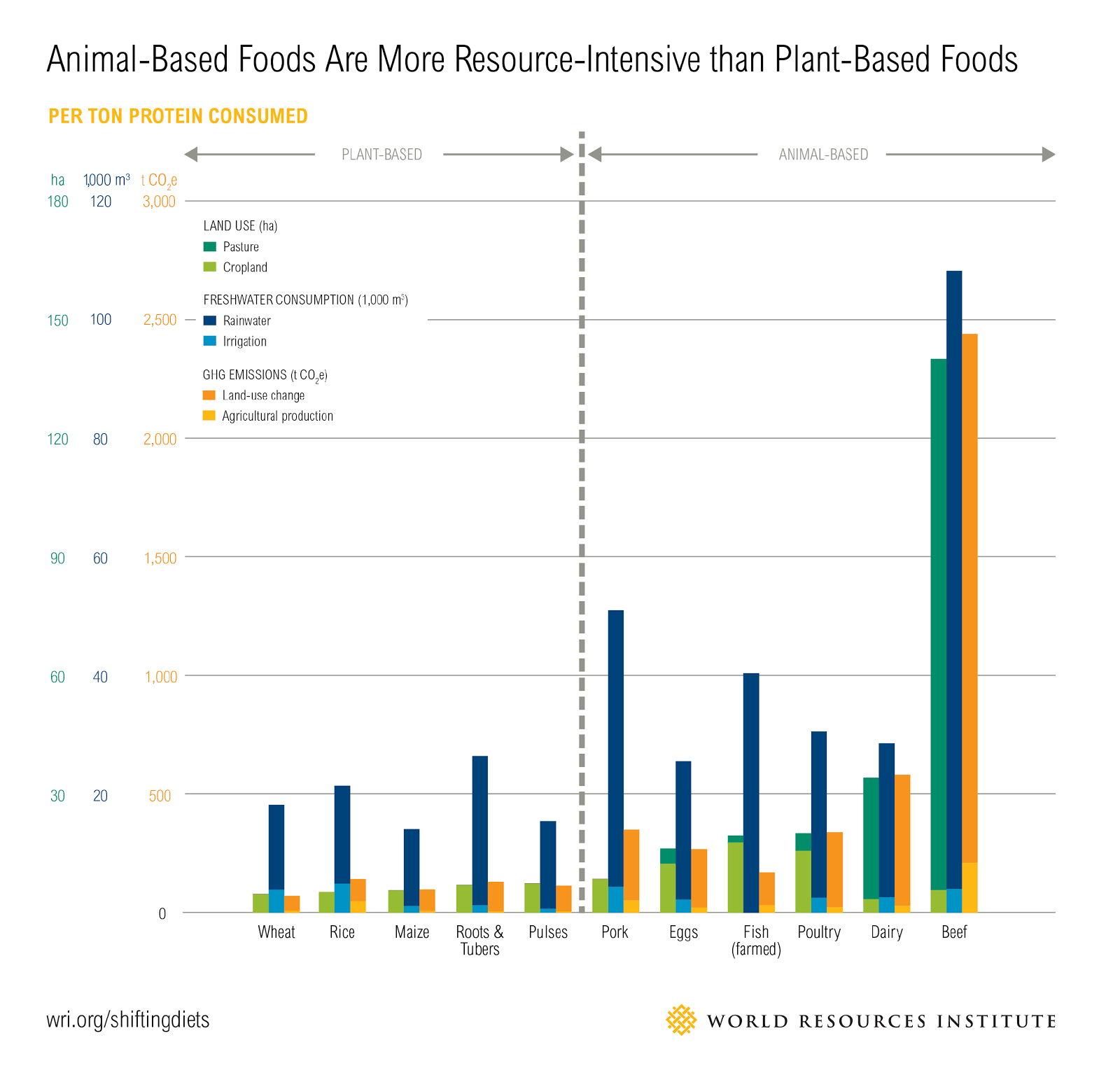 It found that for the average American diet, ambitiously reducing animal protein or going vegetarian could cut per person land use and dietary GHG emissions by 50 percent. Reducing beef alone could cut GHG emissions by 15–35 percent, depending on the degree of reduction. 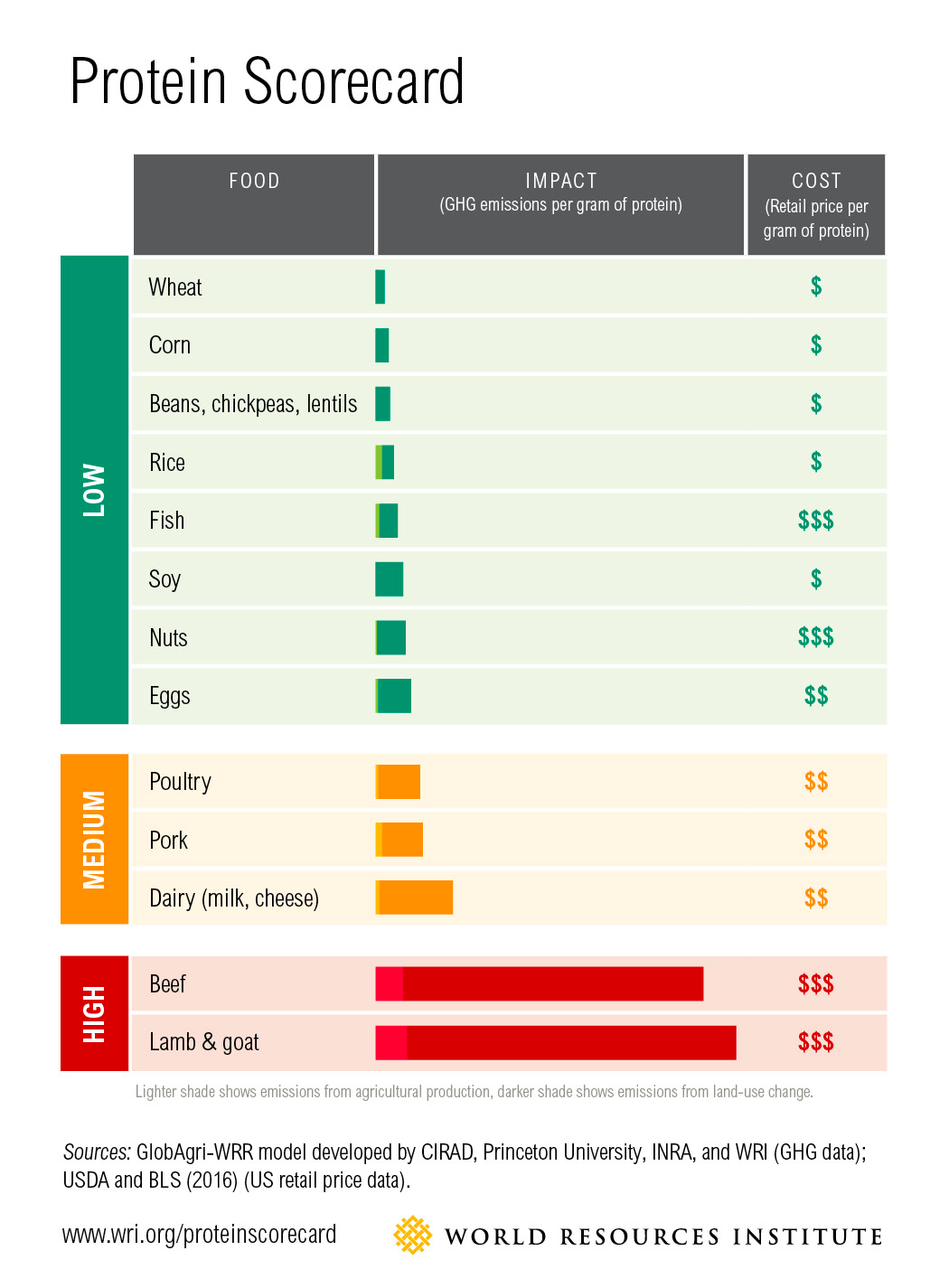 If a large number of Americans — and people in other overconsuming countries — shifted their diets, this would have a huge impact on the environment. It also would get us closer to our emission reduction goals. As a bonus, we would trim down and cut back on health care costs.

For these reasons, Ranganathan stressed, “'Shifting Diets' should be on the agenda of every world leader. It’s a threat multiplier, driving water insecurity, deforestation, climate change and a global epidemic of diet-related chronic diseases."

Dietary change has not figured into the U.S. plan for reducing emissions, nor is it something most people think about when considering climate. A study released by Chatham House, "Livestock — Climate Change’s Forgotten Sector (PDF)," highlights a real awareness gap in the recognition of the impacts of animal agriculture on the environment. The reason? Asking people to change their eating habits is perceived as controversial by policy makers and environmental organizations. But is promoting good health really controversial?

Most studies suggest we align our eating habits with recommendations for a healthy diet, eating more plants and cutting back on meat. Food is often tied up with culture and identity, things we hold dear. The good news is that the message isn’t to never have a latte, an omelet, a steak or fried chicken. It’s rather to point out that we eat too much of these things. We could have healthier bodies and enjoy a healthier planet by being more mindful and eating less meat.

Ideas for feeding the world without destroying it

See all by Mia Overall