How Yerdle helps Patagonia, REI and Eileen Fisher do 'recommerce'

Can a scrappy startup teach big brands new tricks in the age of circularity?

Nearly six years ago, two pedigreed sustainability professionals launched yerdle, a trust-based online platform to find or exchange underused goods — the ski boots, exercise equipment, baby clothes, kitchen appliances and more that take up space in so many of our attics, basements and closets.

Yerdle was a mash-up of eBay and Facebook, a way to leverage your trusted network of friends, and friends' friends, who wanted what you no longer needed, and vice versa. As I described it back in 2012:

Yerdle sees itself as a new kind of retailer — a budding, next-gen Walmart, if you will — but rather than storing things in warehouses and stores, like Walmart and others do, yerdle's warehouses are your friends' closets, attics, and garages.

The service had a modest following, but never gained sufficient traction to create a profitable company. Along the way, the founders — Andy Ruben, who had served as Walmart's first sustainability director, and Adam Werbach, an activist turned entrepreneur who sold his marketing-communications firm to Saatchi & Saatchi — started tinkering with the model.

Changing consumers' consumption habits turned out to be more complicated than simply setting up a swap shop. And warehouses, it turns out, are a necessary evil.

Today, Yerdle has grown up. (Among other things, the company has shed the lower-case Y in its name and now sports a capital letter, like most other proper nouns, and has appended "Recommerce" to its name.) Ruben has taken the reins; Werbach has moved on to other pursuits. The business model has shifted to accommodate the times.

Yerdle's pivot is to a "white label" service for apparel retailers such as Eileen Fisher, Patagonia and REI, enabling those companies' customers to return used goods for store credit. Yerdle then repairs and refurbishes those goods so that the apparel companies can sell them again as refurbished under their own brands, complete with warranties, customer service and return policies.

In some ways, it was a natural progression. The original peer-to-peer swapping model had convinced Yerdle's founders that something very powerful was going on, especially when it comes to a handful of higher-end brands.

"People aspire to certain products and brands," Ruben told me recently during a conversation in Yerdle's warehouse in Brisbane, California, about five miles up Highway 101 from San Francisco International Airport. Many of these products are priced out of reach for many customers, especially young consumers, he noted. "Buying used is a great solve for that."

Yerdle is hardly the first company to traffic in refurbished apparel. Other retailers include The Real Real, which sells high-end brands of mostly women's apparel; Rent the Runway, which offers a rental service for clothing; thredUP, "the largest consignment and thrift store"; and Renewal Workshop, which, like Yerdle, handles returns and refurbishing for a select few brands.

Buying used isn't always easy: 'Friction gets in the way.'

And don't forget eBay, Pinterest and Etsy, all of which offer recycled and repurposed fashion, some of it tricked out with embroidery or other user-created enhancements.

He explained: "Can you trust who you buy it from? What are their return policies? Is it going to be worth your time to even go on their site?" All of these things can make or break any online retailer, especially one peddling previously owned goods.

Yerdle's strategy is to enable apparel brands to develop their own online recommerce marketplaces under their own names, without having to build a whole new website or warehouse. 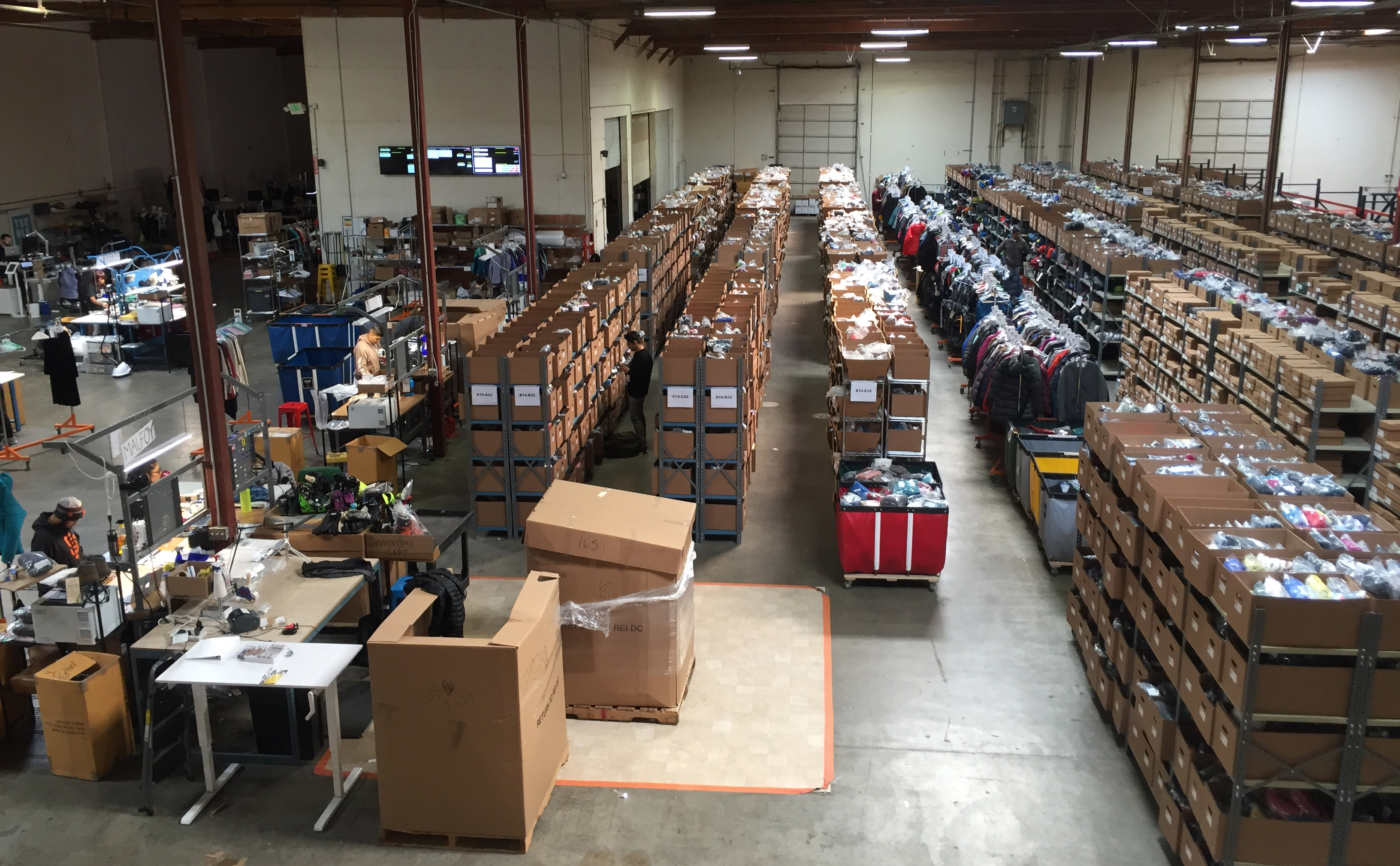 On the day I visited the Yerdle warehouse, a couple dozen employees were engaged in a wide variety of tasks: At one end, workers were opening crates of clothing returned to Eileen Fisher, Patagonia and REI, Yerdle's three current partners. Each item is inspected, inventoried, cleaned, repaired, photographed and placed on the partner's website. Eventually, it will be picked, packed and shipped to a customer.

All of this is done by Yerdle under the partner's brand. The end consumer never sees the Yerdle name.

Yerdle's recommerce play was launched in the middle of last year and ended up generating "several million dollars of revenue" in 2017, said Ruben, who wouldn't provide exact figures. "We will be five to six times that this year. The growth is pretty significant and is just growth coming from our existing partners." As Yerdle adds new partners and more consumers catch on, revenue stands to grow exponentially.

The young company's growth mirrors the growing acceptance of refurbished merchandise. "The resale space is growing at 25 times traditional retail and five times ecommerce," said Ruben. "And it's doing that predominantly because people aspire to these brands that are inaccessible based on their price point."

So far, only a handful of apparel brands are cottoning to recommerce. For many, there's a natural fear that by making refurbished versions of their products available, they'll cannibalize sales of new ones.

Ruben believes that's shortsighted. "The used business is happening whether a brand promotes it or not. So, the real question is, does a brand want to partake in what is happening in a consumer-driven economy? There is a different customer for these used products than for new products. A brand participating in this space gets access to a group of customers that weren't necessarily shopping them before."

The used business is happening whether a brand promotes it or not. So, the real question is does a brand want to partake in what is happening in a consumer-driven economy.

Patagonia is a case in point. Its Worn Wear service, which Yerdle operates, repairs and refurbishes used gear, or recycles it if it doesn't meet quality standards.

"They're loving it," said Nellie Cohen, the Worn Wear program manager, when I asked her recently about consumers' response to buying used. "We're attracting a lot of new customers to the brand. Obviously, for Patagonia, a barrier to entry for a lot of people is price. So, the opportunity to bring people into our brand who may be able to afford Patagonia, but not through us — through super-discounted or used at a thrift store — can now buy directly from us."

Patagonia began working with Yerdle way back in 2013, when the newly minted startup tested a swap service in the front of Patagonia's flagship San Francisco store. (The company is an equity investor in Yerdle.) "We're celebrating with them the fact that products should be rated by how many great experiences they have for you over the years, not just how much it costs," Werbach told me at the time.

It was a prescient move.

According to Ruben, the average age of a customer buying used is 20 years younger than the conventional customer. Millennial consumers often prefer experiences over stuff. They don't view something being refurbished or previously owned as a barrier; indeed, it can be a badge of honor, the sign of a savvy shopper. They are also digital natives, for whom shopping is commonly done on phones and other gadgets. As such, they value having all the information they need at their fingertips, literally. Recognizing this, Yerdle has stocked its clients' pages with product specs and reviews and conveniences like two-day shipping that people have come to expect with buying online.

"This is an entirely new way to think about these items," said Ruben. "It's akin to car ownership or having your music in the cloud. It's a freedom, a different way to operate. If you look at Rent the Runway and the idea of having the world's largest closet, you start to think about access to the brands and the items you want when you want them." 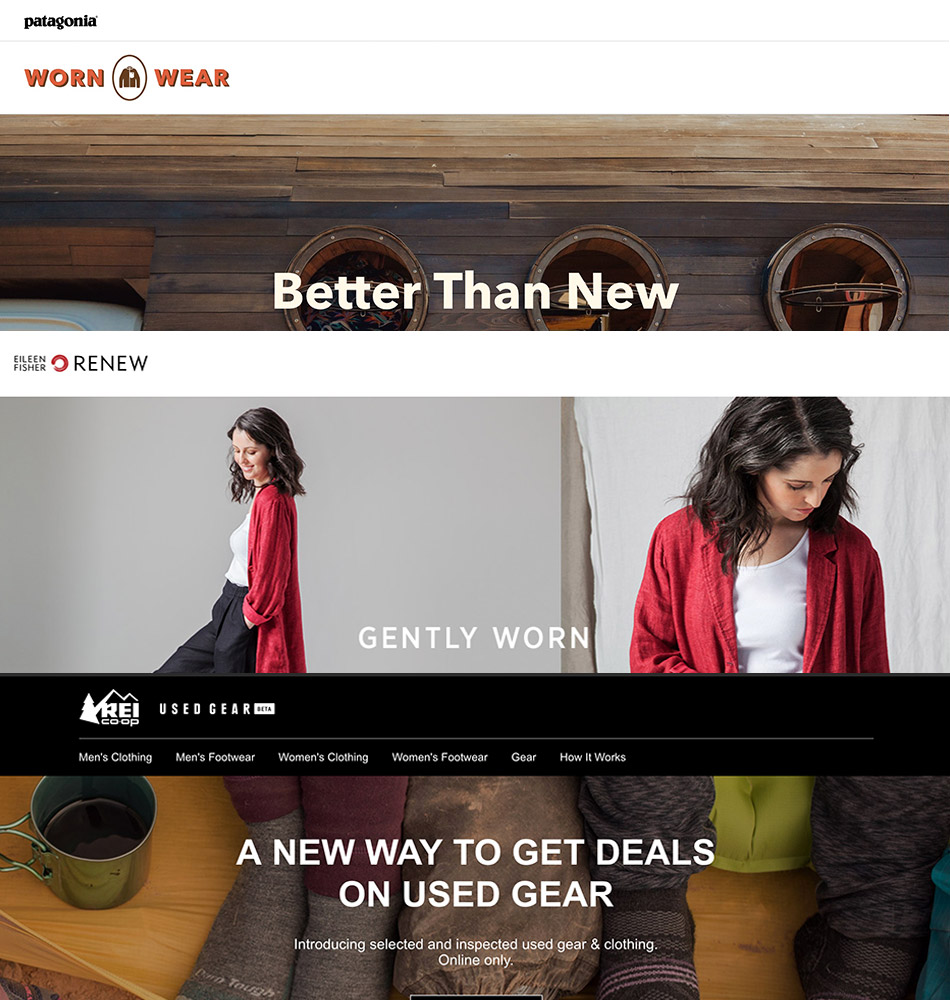 Interestingly, the sustainability part of Yerdle's value proposition is muted, to say the least. You won't find the S-word on Patagonia's Worn Wear, Eileen Fisher's Renew or REI's Used Gear websites, or any overt references to environmentalism, sustainable consumption or anything of that sort.

That's the way it should be, said Ruben. "While recommerce is the biggest thing I know of for sustainability, I love the fact it doesn't have to lead the proposition."

Indeed, recommerce brands are trying to get a handle on the reduced environmental footprint of reused goods. "The data has been hard to get at," said Ruben. "It's messy. And it's hard for a brand to really influence the customer usage. Rather, companies like Eileen Fisher and Patagonia are saying that you don't need to buy a new one if there is a perfectly good one because we've made a well-made item. We can pull it back if you're not using it and get it to the next person who will."

That is: Quality is the new sustainability.

Nellie Cohen echoes that sentiment: "Having a reuse business doesn't necessarily make sense for every company. You have to be a company that builds quality products to begin with. We've made that commitment and that is what has enabled Worn Wear to exist. If we didn't have the designers and materials developers and production sourcing teams that work so diligently behind each product we make, we couldn't do it."

Regardless whether sustainability resonates, recommerce is destined to grow in appeal among the environmentally aware, and not just in apparel. Consumer electronics, kitchen appliances, sporting equipment — almost any durable item can participate. We already buy used cars by the millions.

As it spreads to more product categories, and as enabling technologies facilitate tracking of these goods and materials, there will be a new business mindset, said Ruben.

"Brands that are following every item they sell realize that if they do their job right, every time they make a first sale, they can be setting up the next movement of that item. I would expect in two to three years to see a lot more technology helping brands follow their items — not just upstream in the supply chain but through consumer use as a way to service customers better."

And in the process, maybe sell the same item twice, thrice or more.