As the IT industry continues to grow in prominence in the daily operations of businesses -- and individuals -- around the world, its environmental reports often become nuanced affairs. Even though one firm's carbon footprint grows, a hypothetical report would say, its impacts are more than offset by the fact that it is helping its customers reduce their impacts.

But Hewlett-Packard's 2010 CSR report manages to capture the best of both worlds: Not only has the company's own emissions and energy use declined year over year, the company is also spotlighting how HP products and services are making a difference among its client base. 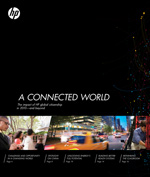 "Our strategy [to address global environmental and social problems] is to use our portfolio and expertise to tackle complex issues -- such as improving energy efficiency, enhancing the quality and accessibility of education, and making healthcare more affordable, accessible, and effective," HP CEO Léo Apotheker writes in the intro to the report. "We approach these issues in a holistic way, stretching beyond quick fixes and piecemeal solutions."

The report is available online and for download, and among the top-line findings:

The findings are about what one would expect from HP, which has long been focused on sustainability efforts, and which ranked first and second in Newsweek's two Green Rankings to date. Earlier this year, HP announced that, in the last five years, it had cut in half the energy used by its products.

The report also highlights how HP is helping to reduce its customers' environmental impacts. Among the examples called out by the company:

The company has also set a number of environmental goals for the coming years, including to reduce emission from all of its owned or operated facilities by 20 percent over a 2005 baseline by 2013. HP will also report on the progress its suppliers are making on GHG emissions reductions on a year-over-year basis, and will report on the actual savings its suppliers achieved by taking part in the China energy-efficiency program.

"HP has played a key role in getting this influential initiative off the ground," BSR's Ryan Schuchard writes in the report, "and, in doing so, raising the bar both for China suppliers and peers by showing that collaboration on climate change between suppliers and buyers is viable."