Saying that there is a whole lot of b.s. in the world of green IT is certainly not an overstatement, but only Hewlett Packard could turn that truth to its advantage.

In fact, the company has just published a research paper showing how data center operators could put the oversized loads of crap that emanate from dairy farms to work in powering computing facilities.

The paper, "Design of Farm Waste-Driven Supply Side Infrastructure for Data Centers," was presented today at the ASME International Conference on Energy Sustainability, taking place this week in Phoenix.

By turning cow manure into energy, the research paper shows how a mid-sized dairy farm -- one that numbers about 10,000 cows -- can generate one megawatt of energy, enough to power a mid-sized data center, saving on energy costs and cutting greenhouse gas emissions by 6,000 metric tons of CO2 equivalent.

Manure-to-energy is not a new technology, of course; it's been put to work in any number of areas, including a Chinese power plant, a Belgian cosmetics factory, and California's gubernatorial inauguration. And that's part of the benefit of the HP proposal.

"All of the components needed to develop something like this are already available," explained Cullen Bash, a member of HP's Sustainable IT Ecosystem Lab team and one of five authors of the report, along with Ratnesh Sharma, Tom Christian, Martin Arlitt and Chandrakant Patel. "It can be done today," Bash added.

While waste-to-energy is nothing new, HP is envisioning its use in new areas and for a new application: Data centers. Waste-to-energy provides a reliable and steady source of energy in ways that solar and wind are not able to achieve, and with 21 times the heat-trapping potential of carbon dioxide, generating energy from the huge clouds of methane that would otherwise warm the atmosphere is a classic twofer.

The circular nature of the waste-to-energy-to-data-center systems works roughly like this: Cow manure is run through an anaerobic digester to generate electricity and heat. The energy goes to powering servers, storage, and HVAC systems in the data center, and the heat can be put to use in heating the turbine in the chiller for the data center's HVAC system.

Then, waste heat from the servers and storage can be sent back to the anaerobic digester, which needs to be kept at a fairly constant temperature. And any additional energy generated by the digester can be used to power farm operations, or depending on where the farm is sited, tied back into the grid for general use.

The chart below, provided by HP, lays out how a waste-to-energy system could power a data center, and HP projects that such a system would save about $2 million per year in reduced energy costs and waste management fees, giving the project a two-year ROI. 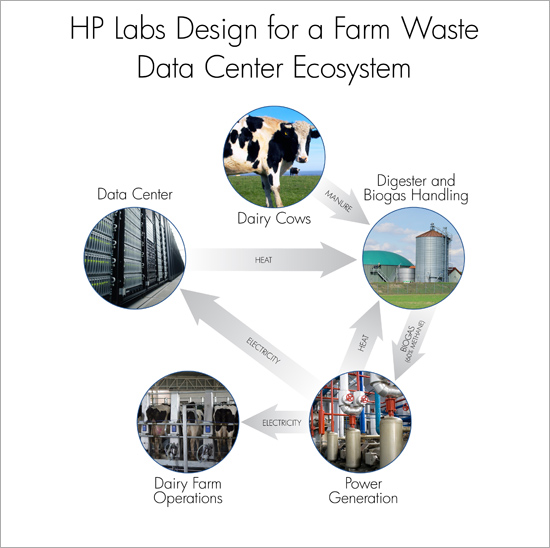 Bash explained that Hewlett Packard is not currently exploring where to put this technology to work, and that in truth no company that he's aware of is. But the technology is not that difficult, and there are plenty of areas around the world that could almost immediately benefit from these systems.

In India, there is a combination of high demand for computing power and low grid reliability. As a result, data centers often rely on inefficient and polluting diesel generators to ensure uptime. But with power coming from a nearby farm, then both needs can be met, and in a very low-impact manner.

"The idea of using animal waste to generate energy has been around for centuries," Chandrakant Patel, HP Fellow and director of the Sustainable IT Ecosystem Lab at HP, said in a statement tied to the release of the report. "Manure is used every day in remote villages to generate heat for cooking. The new idea that we are presenting in this research is creating a symbiotic relationship between farms and the IT ecosystem that can benefit the farm, the data center and the environment."

Although the idea of siting a data center near mid- to large-scale cattle operations (I imagine it's a hard enough sale to get an IT professional to move to Omaha, much less to move to Omaha and be surrounded by literal b.s. day in and day out), companies are increasingly factoring environmental decisions into their facility location plans, alongside the desire for cheap and abundant energy.

The Pacific Northwest is home to a number of huge data centers that owned by major IT players, most of which aim to take advantage of cheap and plentiful hydroelectric power, including Google, Amazon, and of course Facebook. Similarly, the Green Grid has been promoting the benefits of free outside-air cooling for data centers, which is an ever more common feature in new facilities design by Yahoo, Intel, and HP.

But of course, it remains to be seen if, where and when data centers migrate out of the city and out to the farm.