<p>As part of a larger Converged Architecture rollout, Hewlett Packard today lifted the curtain on a new modular compute facility that can be plugged in within 12 weeks and run with a PUE as low as 1.05.</p>

The modular data center revolution continued today with the release of Hewlett-Packard's EcoPOD, or Performance Optimized Datacenter. The 10,000 square foot modules will deliver computing power at high efficiency, with HP touting their "near-perfect" energy efficiency, based on estimated Power Usage Effectiveness ratios of 1.05 to 1.3, depending on the IT load.

The EcoPOD, like other modular systems on the market, can be rolled out in weeks rather than months, cut deployment and operating costs, and are designed to solidify IT's position at the heart of the enterprise.

HP designed the EcoPOD to maximize data center density, with a capacity of more than 4,400 servers that will fit in what HP estimates is 88 percent less space than a traditional data center, and us 95 percent less energy. The facility will use HP's Adaptive Cooling Technology and hot-aisle and cold-aisle containment to maximize efficiency and adaptability. 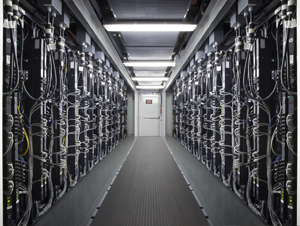 The PUEs HP estimates for the EcoPOD are dependent on location, as always with the ratio. If the POD is sited in an area that can use free outside-air cooling, the PUE can go as low as 1.05 -- with perfect efficiency being a PUE of 1.0; data center locations that need internal cooling will run slightly less efficiently at 1.3, which is still an improvement over average data center PUEs, somewhere between 2.4 and 3.0.

HP has been using their EcoPOD internally and has a few early adopters on board already. The company will make the POD more available later this year, with a starting price tag of about $8 million, according to Heather Clancy.

But more importantly than the specs of HP's EcoPOD is its existence, and how HP is positioning it. As with other modular data centers we've covered -- whether from Cisco, Capgemini, or Schneider Electric -- the central idea of modular compute centers is a recognition that IT is no longer a segmented part of the enterprise, where mortals fear to tread only when something goes wrong.

Whether you're using IT to manage your facilities, facilitate meetings, communicate with customers, track your supply chain, or report your environmental impacts -- or all of the above -- IT is core to operations, and building efficiency into IT is key to keeping the company up and running, and in the black.

And with different departments and different business areas using IT at varying times and intensities, incorporating a modular solution addresses the challenges of expandability, agility and adaptability has become a central business concern.

It's an idea that's been in the making for a long time, but which is only starting to come together in really concrete ways with the rise of smarter buildings, smart grids, telepresence and other next-generation business tools.

More specs for the EcoPOD, as well as details about HP's entire Converged Infrastructure rollout today, are online at HP.com.