As with the Consumer Electronics Show this year, the annual North American International Auto Show had its fair share of green technology - both real and conceptual - on display.

Although the majority of new additions to the cleaner-car market are hybrids, companies are stepping up their work on all-electric vehicles, with some only a couple years away from launching zero-emission rides.

Ford Motor Company announced at the show plans to increase its investment in electric-vehicle technologies in Michigan to nearly $1 billion.

Building on an earlier commitment to spend $550 million to upgrade an existing truck-manufacturing plant in Wayne, Mich., into a state-of-the-art facility for building small vehicles like the just-announced global Ford Focus, Executive Chairman Bill Ford Jr. yesterday pledged $450 million to produce electric vehicles and batteries in the state.

Toyota announced plans to capitalize on the success of its Prius hybrid vehicle with a "family" of Priuses, including a concept compact-hybrid car unveiled at the Detroit show.

The FT-CH (pictured above) is one of eight new hybrid models that Toyota plans to launch in the coming years as a way of achieving its goals of selling one million hybrid vehicles per year early this decade.

In a statement released at the auto show, Toyota Motor Sales president Jim Lentz said, "Within the next 10 to 20 years, we will not only reach peak oil, we will enter a period where demand for all liquid fuels will exceed supply." Calling for the reinvention of the automobile a century after its development, Lentz said also that hybrids are the most successful reinvention of the car yet achieved.

In addition to the new family of Prius hybrids, Toyota plans to begin sales of plug-in hybrids and all-electric vehicles in 2012, and fuel-cell vehicles in 2015. 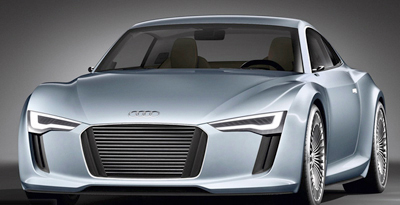 Audi's second electric concept car, the e-tron, (right) can hit 0 to 62 miles per hour in under six seconds. Weighing in at 2,976 pounds, the e-tron has two electric motors with a combined output of 150 kW. It also sports an operating range of up to 155 miles per electric charge, thanks to lithium-ion batteries located behind the passenger compartment and ahead of the rear axle.

The concept's gas-powered engine shuts off when it is isn't needed, allowing the vehicle to be run solely by the electric motor. The braking system and electric battery also work in tandem to recover and use kinetic energy that would typically be lost.

Honda unveiled its showroom-ready CR-Z sport hybrid (below) Tuesday, billing it as small, fun and efficient, without a typical hybrid exterior. Inside, the look is a bit futuristic, with 3-D gauges and black and aluminum style trim. A three-mode drive system helps drivers maneuver in sport, normal and economy settings. 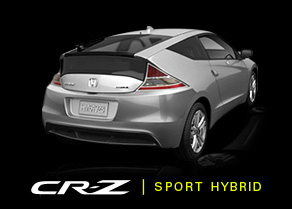 The CR-Z will enjoy an estimated fuel economy of 36 miles per gallon, and 38 highway miles per gallon on CVT-equipped models. The CR-Z, powered by a 1.5-liter i-VTEC engine, is set to go on sale in late summer.

Hyundai's entry in the race to bring more green cars to market is the Blue-Will, a plug-in hybrid concept car. The car is expected to run solely on its lithium polymer battery for a range of 20 to 40 miles. No details were released about plans or the timetable for bringing the car to the production model stage, however.

Information about the Blue-Will concept car was first released by the firm in March just before the Seoul Motor Show. Blue is the signature for Hyundai's more environmentally conscious models. Its Blue Drive emblem first appeared on the 2009 Elantra and Accent. The company has said it will begin building a gas-electric full hybrid of its next-gen Sonata this year.

Taken together with the Blue Drive products, the company says it is on track to achieve a fleet average of 35 starting miles per gallon by 2015.