<p>Using personalized profiles on software developed by IBM and Consert, a smart grid pilot project allowed businesses and residences cut energy use by anywhere from 15 to 40 percent; IBM also announced a plan to make a 60,000-resident Iowa city into a 'smarter city.'</p>

IBM yesterday unveiled the results of a smart grid pilot project that aims to show how much energy savings are possible through the use of electricity monitoring devices.

In partnership with Consert, IBM installed controller devices in 100 businesses and residences on appliances and other energy-intensive items. The controllers conveyed energy usage to the Fayetteville Public Works Commission (FPWC) over the course of six months.

The results show significant savings available from relatively easy changes to behavior. After six months of the pilot project, the average savings at homes and businesses was 15 percent; after the six-month trial period Consert has measured energy savings of as much as 40 percent in some participating homes.

A key to the project was the use of personalized, web-based displays for each business or residence that allowed facility managers or homeowners to log in and see how much energy their appliances and gadgets are using in real-time. the project also allows the FPWC to manage energy use from these devices during high electricity demand periods.

The companies' goal with the pilot project was to highlight the energy used by "ghost" devices: air conditioners, water heaters, and other devices that are using electricity even when no one is around. With the instant information provided by the smart meters, individuals and businesses are able to see when unecessary energy is being used, and turn those devices down or off. 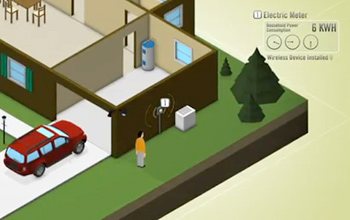 In addition to saving companies on their energy bills, electric utilities are pushing for smart grid technology as a way to reduce demand on the electric grid during peaks. With technologies like those at work in the IBM/Consert pilot project in place, a utility can cycle devices on and off for short intervals to cut down on energy used by any given location.

"The only way we're going make energy grids greener is to add instrumentation and intelligence. Projects like these illustrate that with the right technology and partnerships, it can be done," said Chris O'Connor, an IBM vice president. "Technology is at the core of the next generation of smart grids and IBM is making significant investments into research, skills development and partners to make smart grids a reality."

IBM has also unveiled a new project to take smart grids to the next level. Last week, the company announced a partnership with the city of Dubuque, Iowa, to turn that city into a keystone in IBM's "Smarter Planet" initiative.

The project will incorporate a host of smart sensoring technologies to help city officials, local businesses and residents measure and manage their resource use, with an end goal of minimizing the environmental impact of the city of 60,000 people.

The first two phases of the Dubuque partnership involve IBM's construction of a "Platform for Real-Time Integrated Sustainability Monitoring," allowing city officials to oversee current energy and water use as well as general city services.

At the same time, the city is incorporating into its ongoing citywide water-meter replacement project a device called the "Unmeasured Flow Reducer," which gives end users highly accurate measurements of water use and pinpoint areas that can benefit from greater water efficiency.

All told, the project will bring as many as 1,300 green jobs to Dubuque, through iBM's new technology services delivery center in downtown Dubuque.
{related_content}
"The results of this partnership will empower citizens with decision-making tools to change how they impact the world," said Iowa Governor Chet Culver. "The State of Iowa is a proud partner in this undertaking to contribute to global sustainability efforts."

For more information on IBM's Smarter Cities project, visit www.ibm.com/smartercities; and to see a demonstration of the company's North Carolina smart-grid technology, Consert has posted a short video on YouTube.

Episode 333: The buzz from Climate Week

Episode 332: What the heck is 'nature tech'? A green building legacy