ICLEI-Local Governments for Sustainability USA is teaming up with the Virginia Municipal League to promote greener communities through a contest to develop environmental policies and practices that reduce greenhouse gas emissions.

The partnership between ICLEI USA and the Virginia Municipal League's "Go Green Virginia" initiative is one of several recent efforts across the country to accelerate development of more environmentally friendly communities.

ICLEI and the VML chose four locales previously recognized for their sustainability efforts to participate in the Green Community Challenge. The participants are the town of Blacksburg, Loudoun County, the city of Norfolk and the city of Roanoke.

"Friendly competition can bring out the best among communities and we are excited to join VML in what will be an incredibly rewarding and valuable experience for cities, counties and residents in Virginia," ICLEI USA Executive Director Martin Chavez said in a statement.

"We hope that as a result, Virginia's Green Community Challenge will build on the great success and achievements of the highly successful Green Government Challenge to create more livable and sustainable communities throughout the commonwealth and serve as a successful model to expand to other regions of the country," Chavez said.

Full Spectrum of New York LLC, which specializes in the development of mixed use and mixed income green buildings in emerging urban markets, recently joined the Alliance for Sustainable Built Environments as a partner. Full Spectrum's collaboration with ASBE and the industry leaders that participate in the group is expected to benefit the Old Capitol Green project in Mississippi (artist's rendering, right).

Full Spectrum is the master developer for a downtown site adjacent to Mississippi's Old State Capitol. The area is expected to include residential and commercial buildings, a hotel, theater and retail.

In San Francisco, efforts to turn a 303-acre former brownfield into a large-scale, transit-oriented mixed-use development are paying off. 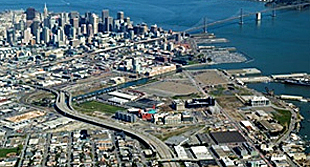 San Francisco Mayor Gavin Newsom announced yesterday that the Mission Bay redevelopment project (pictured right) will receive a $1,350,000 state grant to support affordable housing and has been designated as one of five "gold-level California Catalyst Communities" by the state's Department of Housing Community Development.

The designation recognizes Mission Bay as a model for sustainable development and establishes the project as a priority for future state and Federal funding.

There are now more than 30 life science companies in Mission Bay. When fully built, the site is to include more than 6,000 housing units (about 30 percent of them affordable), 49 acres of new parks, 4.4 million square feet of new office and laboratory space, a 43-acre University of California, San Francisco life science research campus and a 550-bed UCSF hospital for women, children and cancer patients.

Top image of Roanoke CC licensed by Flickr user taberandrew. Other images courtesy of Full Spectrum of New York LLC and the city of San Francisco.