Swedish furniture retailer IKEA has decided to bring solar power to 33 of its 44 stores, distribution centers and office buildings in the U.S. in its latest expansion of an ambitious renewable energy initiative.

IKEA told of its plans this week, saying that it will add 10 installations in the South and Southwest to the 10 that are already in the company's pipeline for construction and the 13 solar power systems now in place within the firm's U.S. property portfolio.

The company's solar program has swiftly grown since it was announced in 2010. Ten of the 13 systems that are on line were completed this year, including one in Baltimore that officially went live this morning. Spokesman Joseph Roth told me the ones in the project pipeline as well as the planned installations announced Tuesday are expected to be built by the end of summer 2012, pending completion of the permitting process for the latest batch of arrays.

Falling prices for systems, as we've written about this year, have made solar installations more attractive to businesses and have sweetened arrangements for retail chains, which often partner with solar or energy service companies and host installations. The deals enable businesses to obtain electricity at cheaper rates and have the green marketing benefit of sporting a PV-topped roof for relatively little or no costs.

However, IKEA purchases the systems that are placed at its properties. So even though the price for systems isn't as steep, increasing the number and frequency of purchases adds up to a greater investment. I asked Roth about the company's bullish stance on solar.

IKEA's strategy, like the company's approach to sustainability, is "part of the Swedish culture of controlling and being responsible for your own destiny," Roth said. "We own our land and we own our buildings, and we want to own the systems on our roofs -- we don't host them and we don't lease them. We think it's a big difference regarding the extent of our commitment to renewable energy and sustainability."

IKEA doesn't disclose specifics on such investments or their paybacks as a privately held company. That status also allows IKEA to function without the concerns for shareholders, stock market and other financial issues that can hamper publicly held companies when it comes to pursuing a triple bottom line, Roth noted. 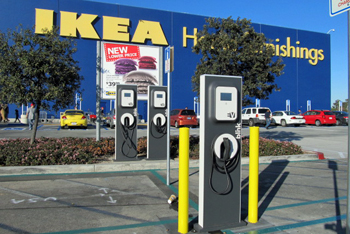 And although he could not provide relative cost figures, he added, "Part of the reason for our doing this is that it is good business sense to reduce electricity consumption, reduce energy costs and decrease operating costs."

The 10 planned projects involve installations at three stores in Texas, three in Florida, one each in Georgia, North Carolina and Virginia, and one at a distribution center in Georgia. Collectively, the sites are expected to have 10.7 megawatts of solar generating capacity and provide more than 15.2 million kilowatt hours of electricity a year. Almost 45,360 photovoltaic panels will be installed for the arrays.

IKEA has a long-term goal of having all of its buildings run only on renewable energy, an aspiration the firm articulated in 2006. Ultimately that would mean installing solar power on some 150 stores, distribution centers and other company buildings around the world, according to IKEA's latest sustainability report.

Goals to reduce energy consumption and carbon dioxide emissions are being developed for company operations  country by country this fiscal year, the report said.

IKEA also is making progress on its program to install EV charging stations at nine stores in Arizona, California, Oregon and Washington in partnership with ECOtality. IKEA and ECOtality had completed installations at four stores as of Wednesday. The project, begun during the summer, is expected to run through next year and will make about 30 Blink EV chargers available at the nine locations. ECOtality is overseeing the EV Project, a coalition effort to build the support network for electric cars in the U.S.