The following is an edited excerpt from "Junk Raft: An Ocean Voyage and a Rising Tide of Activism to Fight Plastic Pollution" by Markus Eriksen (Beacon Press, 2017). Reprinted with permission from Beacon Press.

In 2008, two sailors drifted across the North Pacific to Hawaii on a raft made from 15,000 plastic bottles tied in an old fishing nest stuffed under a Cessna 310 Aircraft. they called it JUNK, and the purpose of the 88 day, 2,600 mile voyage was to build awareness and help build a movement to save our seas from plastic pollution. Here is their story.

"We’re stuck in a loop!" I yell to Joel, as we continue on another collision course, this time with the east side of Guadalupe Island. We chose to go east around the island, the opposite of what Don McFarland and DeVere Baker did on their raft the Lehi IV 50 years ago. While they battled westward winds blowing them onto the island, we’re stuck in a 2-mile-diameter eddy of currents in the shadow of Guadalupe. We’re being drawn in for the second time in two days, but closer this time.

"We’ve got to think about abandoning ship," Joel says. The sight of the sharp, craggy coast and the sound of waves crashing along it grow closer. There’s no beach where we’re headed — or anywhere in sight — just vertical rocky outcrops from which we hear the bark of sea lions. The waves climb up along the shore and then seem to drop a few meters. Guadalupe Island is known for shark-cage diving in this exact spot, where waters in the lee of the island are calmer and sea lion pups are plentiful appetizers for hungry predators.

The life raft is loose, and I clutch my ditch bag, preparing to jump overboard. The bag contains a collection of survival gear I replicated from a bag in Stephen Callahan’s "Adrift: Seventy-Six Days Lost at Sea." Within 100 yards of the breaking waves, the current diverts southward and back out to sea — we hope.

"That’s the second loop," I say, with mixed frustration, relief and amusement. We can’t seem to enter the North Pacific Gyre, into which trash seems to have no problem drifting. Joel throws up the parachute-shaped spinnaker sail, which he hopes will pull us in a new direction. The wind is erratic in the lee of the island, alternating calm and swirling gusts.

Plastics recycling in the United States is in dire need of a new direction. It is wasteful and ineffective. Despite the growth of the recycling industry and increased public education on sorting waste, economically and environmentally, nothing has changed over the last couple of decades, as John Tierney explained in a New York Times op-ed titled "The Reign of Recycling." China’s Green Fence and the plummeting value of petroleum have reduced demand for post-consumer plastics. Meanwhile, municipalities pay more per ton for recycling than for tipping fees at most landfills. Why recycle when the dump is cheaper?

In "The Recycling Myth," Jack Buffington cites growth trajectories over the last 50 years for waste management, incinerators and landfills, compared with the trajectory of the recycling industry. Waste management has surely changed. I remember helping neighbors haul trash to the dump on hot, balmy Saturday mornings in the late 1970s. There was a massive pit, more than 50 feet deep and as big as an Olympic-size swimming pool. You’d simply back your truck up to the edge and toss your trash in. We brought a mountain of roofing shingles one summer, tree limbs knocked down in a hurricane another time. When we brought our beloved green patent-leather sofa, a massive claw on the end of a crane, like the grab machines at amusement parks, lifted it into the open furnace doors of a fiery incinerator. These images are long gone for most Americans.

Plastics recycling in the United States is in dire need of a new direction. ... Why recycle when the dump is cheaper?

Our trash is now efficiently moved from your curbside, out of sight and out of mind. Three corporations — Waste Management, Waste Connections and Republic Services — handle 45 percent of U.S. trash, and they’ve become very good at whisking waste away from your front door to an equally tidy dump miles away. Recycling centers lag behind. Buffington says, "In contrast to today’s mega landfills and waste management companies, recycling operations remain small, decentralized, inefficient and disconnected from the front-end industrial supply chain." Recycling centers are still operating like your neighborhood hardware store, while waste management, incineration and landfills are the Home Depot of waste. It’s a disproportionate scale of efficiency.

Many large cities have material recovery facilities (MRFs) tasked with sorting recyclables and compostables from the residual that goes to a landfill or incinerator. Instead of demanding end-of-life design for products and packaging, which would make everything truly recyclable, the cities continue to spend tax dollars to upgrade technology to capture more complicated types of waste. Laminates of plastic, metal and paper, such as Tetra Paks, juice boxes and thousands of other new packaging designs, are slipping by current MRF recovery technology and going straight to the landfill.

And even if MRFs could recover and sort every bit of plastic they receive from curbside sorted plastics, comingled trash and commercial waste, is it worth it? Thomas Kinnaman, an economist from Bucknell University, argues that the costs of energy, infrastructure and labor needed to recycle waste is roughly double what it costs to bury it.

Kinnaman says, "It has been proven that mandated programs lead to higher recycling rates, but it should not be assumed that higher collection rates lead to higher secondary material reuse. In reality, collecting more of something that cannot be efficiently reused does not solve the fundamental problem but only mitigates the mess, at best."

Cheap oil and reduced market demand, along with the complexity of product and packaging design and supply-chain inefficiency, are prompting many recyclers to throw in the towel and surrender to the economic rationale of landfills and incinerators. Tierney, in the Times, concluded that "cities have been burying garbage for thousands of years, and it’s still the easiest and cheapest solution for trash. The recycling movement is floundering, and its survival depends on continual subsidies, sermons and policing. How can you build a sustainable city with a strategy that can’t even sustain itself?"

But Tierney is wrong, according to city and state leadership across the United States.

Mayor Eric Garcetti of Los Angeles, working with Zero Waste LA, Don’t Waste LA, the Los Angeles Alliance for a New Economy and many others, laid out a blueprint in 2015 to reach 90 percent recovery of solid waste by 2025. "Nothing upsets me more than to hear people say they want to recycle but are unable to," Garcetti said. "Now, we are going to expand that to businesses and apartments where we can recycle 70 percent of our trash instead of putting it in landfills."

But if you’re going to hedge your bets on recycling everything, then you’ve got to demand that everything be recyclable. In "The Recycling Myth," Buffington suggests that "we head in the direction of improvements based on material science innovation (e.g., green chemistry) and design and supply chain transformation." Bringing product and packaging designers to the same table as MRF owners will lead to transformative change, but it will not happen voluntarily.

Policy-driven extended producer responsibility is essential. When a company is responsible for the full life cycle of its product and its packaging, innovation for recovery catches on like wildfire. Germany, where EPR laws have been in effect since 1991, has seen efficiencies in everything from waste-collection vending machines to a Green Dot system that rewards product brands with an EPR plan, resulting in a 1.1-million-ton reduction in the volume of packaging produced between 1992 and 1998, and progress continues today.

In May 2016, President Michelle Bachelet of Chile signed the Recycling and Extended Producer Liability Law, the strongest legislation of its kind in South America, requiring producers and importers to take full responsibility for recovering the stuff they make. Among its provisions is a requirement that producers and importers develop and fund a waste recovery industry to collect, sort and transport packaging back to the companies that produced it.

Bottle-redemption programs work as an efficient recovery system in a circular economy.

Other than container-deposit laws, EPR in the United States is pretty slim. We are the only country out of the 35 member nations of the Organization for Economic Co-operation and Development that doesn’t have EPR for plastic packaging. Beverage bottling companies have been fighting bottle-deposit programs for decades, but in the 10 U.S. states where they still stand, recycling ranges from 65 percent to 96 percent, whereas the national average hovers around 32 percent. In 2013, the California Redemption Value for PET was 10 cents for two-liter bottles and 5 cents for smaller ones, so recovery rates soared above 70 percent. In my neighborhood in Los Angeles, not a single PET soda bottle or HDPE water bottle stays on the ground for very long. Bottle-redemption programs work as an efficient recovery system in a circular economy. Now imagine a redemption value on everything.

In response to John Tierney’s rallying cry to bury and burn waste instead of recycling it, Conrad MacKerron, founder of the EPR advocacy group As You Sow, says, "If recycling doesn’t make economic sense, then Tierney needs to ponder why the CEOs of Walmart, Procter & Gamble, Colgate-Palmolive, and even Goldman Sachs last year established a $100 million loan program, the Closed Loop Fund, to boost the effectiveness of recycling by improving curbside infrastructure and recovery markets."

The trend in recycling is EPR in front-end design to truly close the loop. It’s what we want — better design, so that recycling really means the material easily returns to the manufacture stage. Psychologically, we’re primed to recycle, as demonstrated by our response to advertising that promises biodegradability and recyclability, words that tug at our ethical heartstrings. We want to do it. We only need the systems behind the scenes to practice what they preach.

"We’re going to Acapulco!" I say to Joel. It’s our new story, suggested by our friend and storytelling guru, Randy Olson, who suggested, "Pretend it was your plan all along. Broadcast it on the blog!" Recreate our story, instead of submitting to the fates of the sea. We’re a heap of junk adrift, without much control over where we are going. We left Los Angeles three weeks ago. We’re 300 miles away ... with 2,000 to Hawaii, 1,000 to Guatemala and 400 to Acapulco. 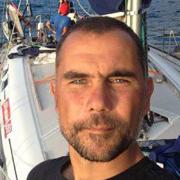 See all by Marcus Eriksen