The funeral cortege was small. Six people shouldered the bier and others followed, clad in the traditional Indian white. As the group filed past the state assembly building, the armed guards did not give it a second glance. In a few minutes, however, the security forces caught on. The procession winding its way through Mumbai’s government district was not a real funeral: It was a protest. The shrouded body held aloft was not a human — it was the trunk of a tree, one of many, including grand old banyans, cut down for the construction of a $3.3 billion subway line.

Mumbai’s old trees have borne the brunt of new development in the booming city, including road widening, transport projects and housing construction. The new subway alone is destroying or damaging 5,000 trees, from hundreds of old street trees in the dense parts of the historic island city to more than 2,000 trees in a mini-forest in suburban Aarey Colony, where a rail car shed is to be built. A less visible loss lies in defunct industrial areas, where large plots with old trees and ponds are being redeveloped into residential and commercial towers. "Developers are supposed to replace the trees but no one really checks," says Stalin D., head of local environmental group Vanashakti.

The loss is palpable for many in this city of 12.4 million. Mumbai has always had one of the world’s worst ratios of open space to people (at 1.1 square meter per person compared to 6 square meters (PDF) in New York City), and the city’s air quality has deteriorated in the past few decades with increased construction and traffic — a million vehicles were added to roads between 2012 and 2017. "We’re not only losing our natural heritage in the form of old trees," says Stalin. "Trees and parks are what make our city liveable, breathable."

We’re not only losing our natural heritage in the form of old trees. Trees and parks are what make our city liveable, breathable.

Mumbaikars have not taken the destruction lightly. Residents have climbed up trees to stop them from being felled, held mass rallies to save the Aarey forest, put up banners accusing the municipality of murder and repeatedly gone to court. These efforts have not always succeeded in preventing the loss of trees, as demonstrated by the subway line, but they have raised public awareness and forced authorities to do more compensatory tree planting. In October, the courts ordered an overhaul of the municipal tree authority and required the agency to add qualified, independent environmental experts to help assess tree-cutting proposals.

Such battles are being fought in cities across India, where growth has come at the cost of thousands of urban trees, especially old street trees, leading residents to protest in dramatic and heartfelt ways. In Bangalore, a historically green city that has become a traffic nightmare as its economy has grown, residents formed a human chain in May when they found 25 large flowering trees felled overnight to make street-side billboards more visible.

In the sprawling capital of Delhi — which lost around 112,000 trees between 2005 to 2017, largely to road construction — a new proposal to cut 14,000 trees for a redevelopment project brought about 1,500 protesters onto the streets in June. The protesters included students who hugged and chained themselves to the trees, echoing a famous 1970s tribal conservation movement. The Delhi government since has promised not to cut any large trees for the project and to transplant smaller ones in the path of development. 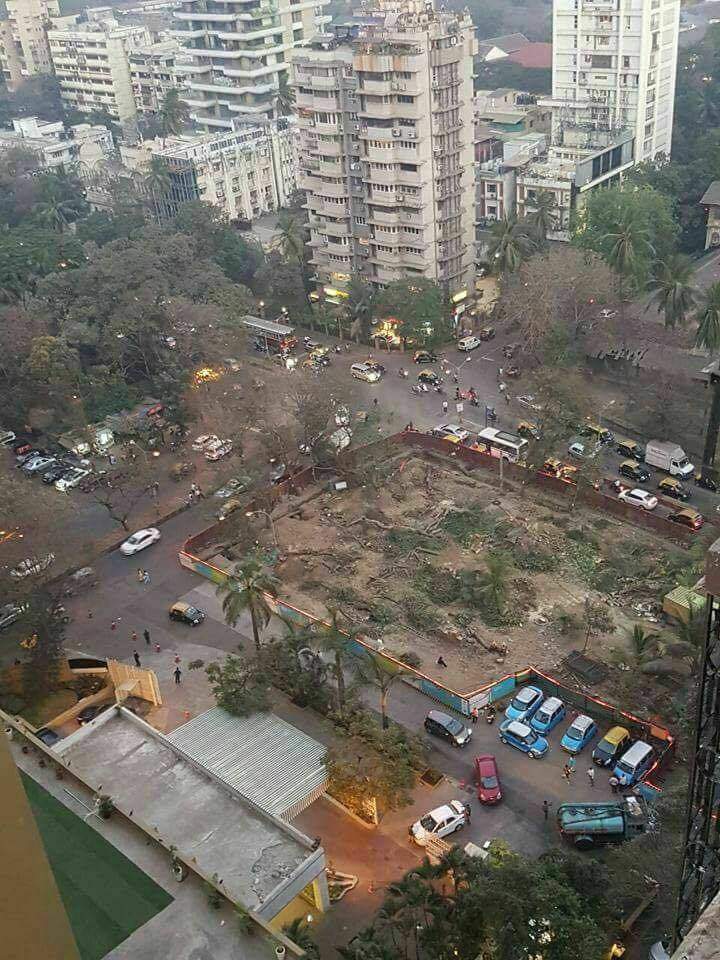 These protests are hardly unique to Indian cities. In the British city of Sheffield, where officials planned to fell 17,000 trees to improve roads and footpaths, residents recently staged mass rallies, hugged trees to prevent them from being cut, and, in some cases, were arrested by police. Despite the protests, the city cut down more than 5,000 trees.

Such conflicts reflect not only the attachment many have to their neighborhood trees, but the imbalance of gray and green cover in many big cities. That disparity is especially evident in some of the most densely populated and polluted megacities of the developing world — places that would benefit the most from the environmental benefits of tree cover, yet often have the least. Many cities in Europe and America have more than 20 percent tree cover, according to The Nature Conservancy’s Planting Healthy Air report, while many developing country cities have less than 5 percent. This statistic reflects the rapid pace, and often ad hoc nature, of urban growth in the developing world; a lack of official concern for green cover, especially old trees; and, in some cases, a need for better, more scientific tree-planting initiatives.

"As cities grow with more buildings and traffic, you need more trees, not less," says Zoru Bhathena, a businessman who has been at the forefront of Mumbai’s tree wars. "A city can’t be all concrete."

City trees provide a host of functions — absorbing carbon dioxide, filtering pollution, cooling the air, shading pedestrians from sun and rain, slowing down floods and nurturing wildlife. On crowded Indian streets, large old trees are used as niches for rest or small commerce, providing a shady spot for a cobbler or coconut-seller. In dense neighborhoods, green canopies muffle noise and give apartments privacy.

"We’ve known for a long time that shade makes streets tolerable," says Robert McDonald, lead scientist for The Nature Conservancy’s Global Cities program. "What’s changed in the last 10 years is a new [scientific] appreciation of how many different benefits trees provide and how important they are for human health."

New research is quantifying the cleaning and cooling ability of trees, as well as their carbon sequestration potential. A 2016 report (PDF) led by McDonald on 245 major cities found that trees can reduce concentrations of particulate matter by 7 to 24 percent and lower nearby temperatures by 2 to 4 degrees Fahrenheit. For roughly $4 annually per person, the study found, cities could plant and maintain enough additional trees to save 11,000 to 36,000 lives a year from air pollution and heat-related mortality. Unsurprisingly, the most polluted cities — Delhi, Dhaka and Mumbai, among others — would get the highest return, the study found. Scientists also have begun to measure psychological benefits. Studies have shown that Delhi residents near a park area have lower rates of depression and that students in California schools near trees scored higher in tests.

The economic value of all these benefits? Trees may save megacities more than $500 million a year in public health costs, energy expenses and environmental protection, according to a 2017 study.

These findings are slowly trickling into policy. Most forest carbon credits are issued for tropical rainforests, but the Seattle-based non-profit City Forest Credits is enabling cities such as Austin, Texas, and Seattle, Washington, to plant more trees with funding from companies looking to offset their carbon emissions. And with climate change threatening more frequent heat waves and floods, some cities such as Melbourne and New York have adopted tree planting as part of their resilience strategy.

In India, scientists have begun looking at which tree species can best tolerate pollution and thus help clean the dirty air. A study in Varanasi found that native species such as fig, banyan, mango and ashoka, with their large thick leaves, withstood air pollution better and were more suited to planting in that urban area.

More practically, court rulings have forced Indian authorities over the years to improve transplantation and compensatory reforestation requirements. In 2015, the Delhi high court ordered local authorities to plant new trees before cutting down old ones for a bridge. Last year, India’s Supreme Court upbraided the federal government for misusing a compensatory tree-planting fund.

That’s not enough for activists such as Mumbai’s Stalin. In the past few years, he has fought to get authorities to remove the concrete choking the roots of street trees; to investigate alleged poisoning of two large trees that were blocking views of a major chain store; and to stop unscientific pruning. But, he notes, the penalty for illegal cutting is usually $29. "The laws are weak, and so is the enforcement," he says.

A fundamental problem, he says, is that municipal tree authorities see their role as limited to granting permission to cut a tree, rather than acting as guardians of the city’s trees. Proposals are rarely rejected unless a citizen or NGO objects, he says.

Meanwhile, the transplantation and new planting of trees are riddled with problems. In Mumbai, an inspection in November found that more than half of 993 trees transplanted for subway work had died. As for compensatory planting, it is often not done in the same neighborhood. Subway authorities, for instance, are planting 20,000 trees in a national park on Mumbai’s edge, while the densely populated neighborhood where the trees were felled has lost valuable tree cover.

Moreover, unless saplings are well cared for, planting programs also can become box-checking exercises that lead to few new trees, experts say. "They may have planted tens of thousands, but what is the survival rate?" asks Rashneh Pardiwala, an ecologist who runs the Center for Environmental Research and Education (CERE) in Mumbai, adding that it is often no more than 10 percent. That doesn’t mean that tree planting efforts can’t succeed, if done carefully. CERE, which has planted some 42,000 trees across Indian cities since 2015, claims to have a 90 percent survival rate. They have achieved this, says Pardiwala, by planting tall, well-rooted saplings of appropriate native species such as sacred fig, medlar and teak, and by taking care of them for at least a year.

Still, new trees can’t quite replace the large, old trees being razed in Indian cities. The photosynthesis potential and carbon sequestration of a 100-year-old tree can’t be compared to even a 20-year-old one, says Pardiwala. It’s why most compensatory planting programs mandate several trees be planted for every felled one. "But frankly, it’s not easy to replicate the arithmetic of nature," she says.

Awareness of this fact, along with a passion for trees, is what keeps citizen activists such as Bhathena vigilant. Every week he scans the papers for notices of tree cutting, which the tree authority is required to issue whenever it receives a proposal. When he comes across a notice, he files an objection or asks for a site inspection. "I’m not against development," Bhathena adds, noting that the subway project will help reduce air pollution by taking vehicles off the road. "But there is a lot of mindless cutting."

He believes that’s what happened with Mumbai’s new subway. The developers dug up entire roads, including trees on both sides, even if they didn’t need to, he says. "If they have the engineering expertise to avoid damaging sewer and water lines, can’t they save some of the trees?"